Get the app Get the app
Already a member? Please login below for an enhanced experience. Not a member? Join today
We will be performing maintenance on our systems Sunday, 5/22/2021, beginning at 12:00 A.M. ET and ending at 6:00 A.M. ET. During this time, you may experience intermittent service outages. We appreciate your patience.
News & Media Pilots: Inflated Adventures

Kiman Kingsley sprays crops, farms some 2,000 acres, instructs at his family crop-dusting school, and oversees publicity events hosted by Hangar Kafe, the restaurant he constructed adjacent to his Missouri airstrip near historic Route 66. But in 1999, he found a new aviation passion: ballooning. 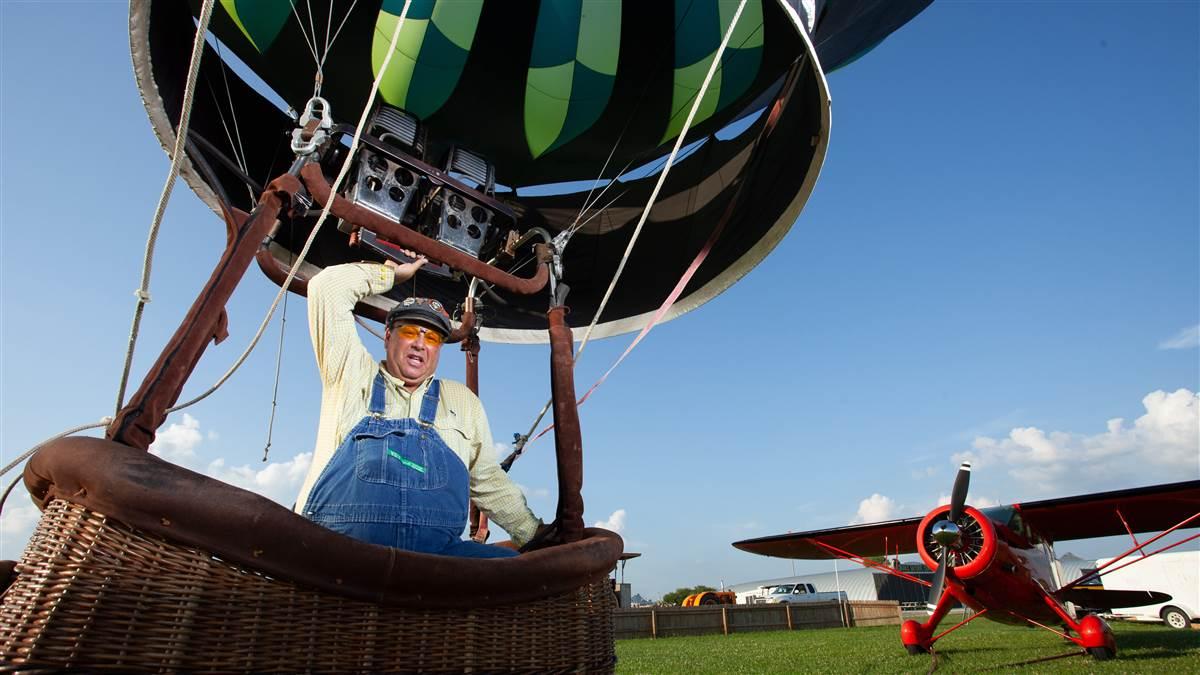 “I’m grateful for the work I have to do, but I wanted something I could do for fun,” Kingsley said.

After attending the Albuquerque International Balloon Fiesta in Albuquerque, New Mexico—the largest in the world—he knew immediately that hot air ballooning was the hobby he wanted to pursue.

“It was the first festival I’d ever been to,” Kingsley recalled, “and I went every year after that, always with the dream of owning a balloon of my own.”

Eight years later, that dream became a reality when he purchased a well-used balloon and trailer for the bargain price of $2,500.

“It wasn’t in the greatest of shape,” Kingsley said. “It had been in storage for 15 years and smelled like dirty old socks, but I was glad to have it. The problem was, I had no idea how to fly it.”

His next challenge was to get his name on a list of balloon rally invitees. Balloon owners can’t just show up at a festival expecting to participate and be welcomed with open arms. Pilots are invited to attend based on whom they know—specifically, their connections with rally organizers, known as “balloon meisters.”

Two years later, Kingsley bought his second balloon, Gotta Luv It, from Frank Capps, the balloon meister for the annual festival in Poteau, Oklahoma. As a result, he received his first official invitation to the rally in Poteau, and the number of invitations he received ballooned thereafter.

Kingsley enjoys being able to fly at an altitude and pace not possible in an airplane.

“I like following the course of a river, or spotting crows’ nests in the treetops,” he said.

The thing Kingsley relishes most about hot air ballooning, though, is the uncertainty of his landing site: a sentiment not shared by pilots of fixed-wing aircraft.

“Landing in a stranger’s field, or on a lawn in an upscale Chicago neighborhood, adds a little excitement to a flight,” Kingsley said with a grin. “You just never know where you’ll find a friend.”

Kingsley recently purchased his third hot air balloon, Pixel Perfect, which boasts a customized, handicapped-accessible door and a 105,000-cubic-foot envelope—larger than either of his others. Its maiden voyage with Kingsley aboard was launched from the pasture near Hangar Kafe.

While some balloon pilots offer rides to the public, Kingsley has no interest in flying commercially.

“For me, hot air ballooning is strictly for fun. If I give rides to paying customers, it might start feeling like work. Then, I wouldn’t enjoy it,” he said.