Get the app Get the app
Get the latest news on coronavirus impacts on general aviation, including what AOPA is doing to protect GA, event cancellations, advice for pilots to protect themselves, and more. Read More
Already a member? Please login below for an enhanced experience. Not a member? Join today
News & Videos Autothrottle debut

On a bottom shelf in my office there’s a mini-museum of sorts. Its artifacts are several items of aviation memorabilia from the 1990s—Garmin handheld GPS navigators. There’s a GPS 95, about the size of a paperback, with its fat little antenna and tiny LCD screen. Press its shortcut buttons and alphanumeric keys and you can make a flight plan and see its routes and fixes crudely represented on the screen. 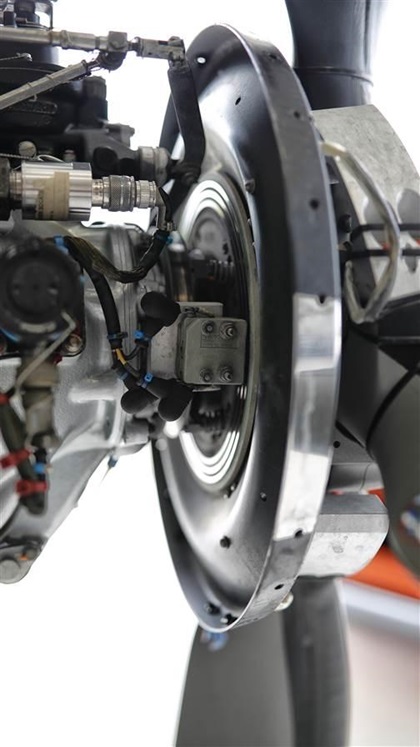 Power to the prop

How do you send electrical power to a rotating propeller anti-ice system? Electricity flows from a graphite-composition brush block (square component) to circular slip rings (shiny concentric elements) behind the propeller hub, then on to etched foil elements inside the rubber boots of a propeller’s leading edges. The Hartzell five-blade propeller shown here is mated to a TBM 940’s Pratt & Whitney PT-6A-66D turboprop engine.

Another blast from the past is my old GPS 90. It’s smaller than the 95; has fewer buttons to push; and a central, four-way softkey to call up different functions. There’s also a GPS III Pilot, so small it can fit in your pocket. It even has its beanbag mounting “system”—plop the beanbag on the glareshield, push the III Pilot onto its Velcro strip, and you have a mini moving map.

Handhelds like these, plus the GPS 100 and others, were all the rage back in the day, when six-pack instrument panels ruled. Garmin sold thousands of them—“faster than we could make them,” according to a Garmin official—each model more feature-rich than the last. The screens got bigger and their definition got better.

Then came a strategic shift to panel-mounted GPSs, escalating in quality. The first IFR approval was earned in 1994, followed by ever-larger color displays, followed by terrain and weather overlays, followed ultimately by what’s become a general aviation standard in everything from piston singles to large business jets: Garmin autopilots and the three-screen G1000, G3000, and G5000 large-screen avionics suites. Today, Garmin is a $3.4 billion company with stock selling at $78 a share the last time I looked. A share went for $14 when it went public in December 2000.

In this issue, we look at the new TBM 940—and, yes, virtually all of its avionics are made by Garmin. That includes its latest venture into autothrottles. Garmin’s autothrottles are also in the Cirrus Vision Jet and Cessna’s Citation Latitude, Longitude, and Citation X+. The TBM 940 joins Innovative Solutions and Support’s retrofitted Pilatus PC–12 and Beechcraft King Air B200 as the only autothrottle-equipped turboprops on the market today.

The debate over automation’s influence on pilot proficiency will continue, but there’s no denying the autothrottle’s utility. The prevailing opinion used to be that autopilots serve as substitutes for deteriorating piloting skills. Now they are recognized as vital tools for managing pilot workload. Even so, pilots still have a responsibility to maintain currency and proficiency in their hand-flying skills. That goes double for those flying as single pilots.

The debate over automation’s influence on pilot proficiency will continue, but there’s no denying the autothrottle’s utility.You can say the same thing about being proficient in managing autopilot and autothrottle operations. Which is worse—a pilot on autoflight given multiple amendments to their clearance in demanding weather conditions, or one hand-flying? Either way, you’d better be up to speed with stick-and-rudder skills as well as your automation’s knobology. The trend is toward more automation, for all types of aircraft. Not knowing your black-box procedures can be just as dangerous as being rusty on basic flying.