Get the app Get the app
Get the latest news on coronavirus impacts on general aviation, including what AOPA is doing to protect GA, event cancellations, advice for pilots to protect themselves, and more. Read More
Already a member? Please login below for an enhanced experience. Not a member? Join today
News & Videos Training Tip: Starvation by selection
Sponsored by Aircraft Spruce

What’s the first thing you look at inside the cockpit when you pop the door open before flight? 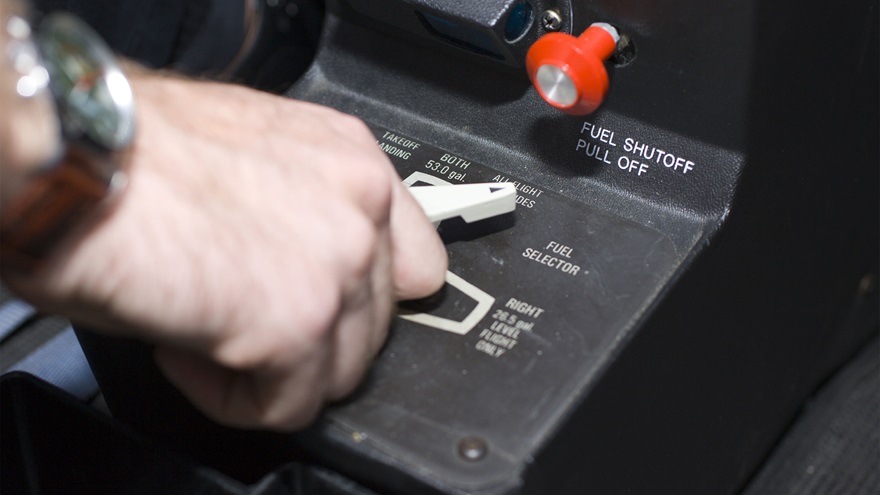 For me it’s the fuel selector valve. My eyes don’t move away from it until I have satisfied myself that the fuel system is not switched off. And I know that the preflight checklists will shortly bring me back to the fuel selector for one or two more checks before we fly.

About 99 percent of the time I find the fuel selector set to “on” or “both” when I perform this habitual check.

Once in a while, however, I find the fuel switched off, which frankly gives a jolt of surprise and makes me extra glad I’ve become slightly obsessive about checking this critical item. When I see a fuel selector set to “off” I try to find out why—does it mean something went wrong on the previous flight, or that an unannounced maintenance procedure has begun?

Aircraft fuel systems vary widely in design and complexity, so there’s no time like the present to develop a keen awareness of the need to use great care managing a fuel system. Student pilots who train in high-wing airplanes with gravity-flow fuel face a big adjustment when moving to low-wing airplanes that don’t draw from “both” fuel tanks simultaneously, and which employ an electric boost pump as an integral part of fuel system operation.

A private pilot applicant may be tested on the appropriate action to take in the event of a fuel starvation emergency.

Drawing fuel from only one tank shortens your time horizon for making fuel-management decisions that may also require planning to keep the fuel load in wing tanks balanced.

Can you think of another consideration to incorporate in your method of switching between fuel tanks?

It’s safety, as emphasized in the response I received when asking a Piper PA–28-140 owner how she switches fuel tanks on cross-country flights.

“Every half hour or whenever over an airport,” she said.

Accident reports confirm that just as important as verifying the fuel selector’s position before takeoff is to confirm its position after an in-flight adjustment, to avoid fuel starvation by selection in the air.

A Cessna 182 pilot who casually repositioned the selector from the right tank to “both” learned the hard way that it had been inadvertently positioned to “off.” After landing on a country road, the pilot wrote that the experience “will forever burn into my memory the necessity of visually and physically confirming the location of the fuel selector.”