Get the app Get the app
Already a member? Please login below for an enhanced experience. Not a member? Join today
News & Media Soaring camp transforms teen

“Dad, where’s your variometer?” asked my 16-year-old daughter Lauren as she inspected the panel of my borrowed Cessna 182. A week of soaring in Vermont's Green Mountains had transformed her attitude about aviation.

I had sprung this plan on my precious child weeks before, announcing my intent for her to attend the Sugarbush Youth Soaring Camp. She protested, virtually from the moment I delivered this unwelcome news until our arrival in Vermont.

Lauren reminded me that she was making great sacrifices to be away from her friends "for a whole week," and that she would also miss the pay from her restaurant hostess job. "Dad, I need that money for makeup, eyelashes, and nails," she reminded me.

Lauren finally, begrudgingly, agreed to tolerate the camp, provided, importantly, that she would not be the only female attending.

That was the before picture.

Loading up for the flight home to Maryland, I was temporarily stunned when she sprung the flight instrument question on me, and then a smile spread across both of our faces. I explained that an airplane with an engine didn’t need a variometer because we had an altimeter and a vertical speed indicator instead. Score one for the old man and one for the reluctant teenager who really did pay attention during flights and ground classes.

Regarding my daughter's reluctance: Warren-Sugarbush Airport operations director Tom Anderson promised me that he’d seen and heard it all before. Anderson; his wife Jen Stamp; and a host of glider instructors, pilots, staff, and line personnel are the ideal companions for the packs of youths who descend on the challenging mountain runway for three weeklong sessions each summer. He reassured me that my beloved teenager—whose primary sport was texting her friends—would come away a changed person, with more self-esteem, independence, and knowledge. He was right. 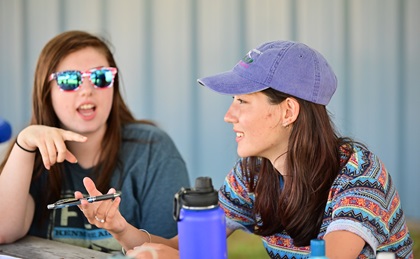 Anderson rescued me with intern Sonia Talarek, also 16, who enjoyed her soaring camp experience so much that she returned for a second—and then a third time. She and Lauren hit it off in about five minutes and I knew we were good to go.

The kids sleep in a tent circle adjacent to a gazebo near the grassy landing area. They are treated to breakfast, lunch, and dinner at the airport café, which also serves as a clubhouse, a pilot shop, and a movie theater. My favorite comedy, Airplane!, was on one night when Lauren called home. I later learned that she cleaned up in Monopoly and often stayed up late playing cards with her new friends. Well, that’s what camp is for when you’re a teenager, right?

Shortly after arriving and setting up tents, the kids went to work. They hand-walked the long-wing aircraft back to the runway threshold after landings, helped each other attach tow ropes to the gliders, logged each other’s flights on a clipboard—and took turns piloting each of the three sailplanes.

Eagle-eyed instructors gently coached them on technique and safety procedures. More experienced campers helped first-timers. Soon friendships were born, and the teenagers began to operate as a team. It was clear that they gained confidence in themselves and in their ability to do something new. 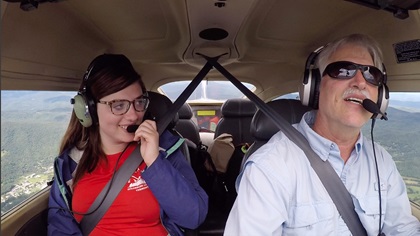 On takeoff from the narrow 2,575-foot-long sloping mountain runway at Warren-Sugarbush Airport, Lauren surprised me with more details. “There’s going to be a big body of water over there,” she said as she pointed southward as we turned and climbed above pattern altitude. “That’s Blueberry Lake where we went kayaking and swimming.”

An updraft rocked the Skylane and I warned her it was likely to be a little bumpy until we maneuvered out of the mountains.

“Dad, we learned about thermals and lift and stuff,” she said as we topped a ridge to the west. “Did you know there are a lot of sink waves over this way, and in Vermont in general?”

“Why, no, I didn’t, first officer Lauren—but thank you very much for the advice,” I replied. The dad in me heaved a sigh of relief as we rocked through the stale afternoon air.

“We might have to climb pretty high to get over some of these puffy clouds and around the rain,” I warned, as we bucked left and then right in the Cessna during our return to Maryland. I planned our escape from the turbulent atmosphere by following the interstate highway to lower terrain at Burlington International Airport, but rainshowers nearby were dampening my enthusiasm for the plan.

“We can’t go any higher right now because of the clouds nearby and it’s fairly bumpy down here at 4,500 feet in altitude, but we can climb soon,” I said.

“And then I get oxygen, or at least you have to offer it to me, right?” she asked with a grin. Well, knock me over with a feather! 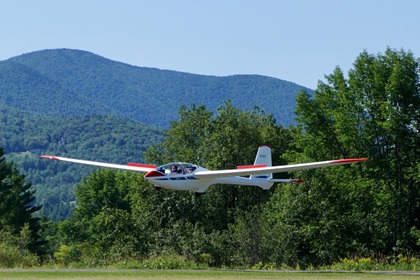 “Well, we’re not going to climb high enough for oxygen, but you’re correct,” I complimented. I had figured that hours of wrangling sailplanes and typical camp activities would have taken a sleep-deprivation toll, and much of the 7:30 a.m. ground classes would have been obscured by daydreaming. I was pleasantly surprised to learn that assumption was incorrect.

“Lauren, can you take the controls for a minute while I check on a few things? Keep us at about 4,500 feet on the altimeter, follow that big road, and it’s your airplane.” I pretended to shuffle the checklist and some other cockpit items as the teenager took over. I punched in GPS coordinates for a flight plan and sneaked a look at our heading and altitude. She did a pretty good job of keeping us straight and level in a bumpy, noisy, and rather challenging situation.

Unfortunately, I didn’t have the heavy Skylane perfectly trimmed yet, so it wasn't long before I heard the familiar, “Help me, Dad!”

“No problem, Lauren, you’re doing fine, but I’ll take the airplane back.”

Seven days of flying exercises, working with new friends, and staying up late had finally caught up with the 16-year-old bundle of energy.

“Well, go ahead and fall asleep, co-pilot, I got this one,” I soothed. “Goodnight.”