Get the app Get the app
Already a member? Please login below for an enhanced experience. Not a member? Join today
News & Media Aerial tour reveals Grand Canyon West Rim splendor

Crossing the West Rim of the Grand Canyon reveals an orange, pink, and tan chasm and we plunge 4,000 feet down to the Colorado River, cliffs carved over eons reaching toward our helicopter.

My family of three is awestruck at the spectacular scenery filling the windscreen. Quartermaster Canyon reveals itself to our right as the pilot banks to parallel its outline. Myriad nooks and crannies cradle an inhospitable boulder-strewn landscape that welcomed explorer John Wesley Powell during an 1869 expedition to navigate and document the two-billion-year-old natural wonder.

My daughter, Lauren, has the front-seat view, and she is quick to document the flight for her Snapchat audience. My wife, Lisa, takes the second row of seats with me. The view to the front, to our left, and to our right doesn’t disappoint any of us.

We maneuver toward Horse Flat Canyon for a landing yards away from the ruddy Colorado River etching its way through the Arizona desert. We scramble out of the helicopter and onto the walking path and are immediately bombarded with the 104-degree-Fahrenheit desert heat radiating in late June. My appreciation soars for the pilots flying in demanding density altitude conditions with heavy passenger loads. 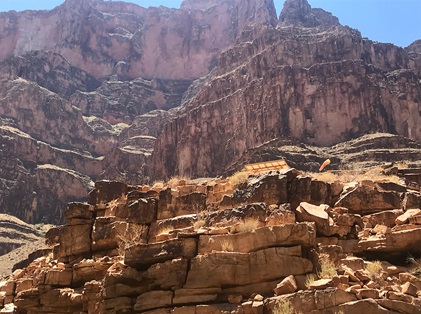 We are participating in an all-day Hualapai Legacy Tour that I determine is the most bang for the buck during an abbreviated Grand Canyon family vacation. The West Rim trifecta includes walking in special socks along the 10-foot-wide glass Skywalk 4,000 feet above the canyon floor, a guided pontoon boat ride to Separation Canyon—where a third of Powell’s nine-man crew left the expedition to take a different route—and the round-trip helicopter flights into and out of the chasm.

The National Park Service explains that the Grand Canyon’s story “begins almost two billion years ago” when lifting and subduction shaped the canyon’s features. Layers of rock record the history of the canyon like chapters in a massive book stacked one atop the next. The Vishnu Group lower layer was formed first. Successive layers deposited above it include Bright Angel Shale, Muav Limestone, Redwall Limestone, the Supai Group, Hermit Shale, and Coconino Sandstone. The uppermost layer of rock that makes up the Colorado Plateau today was formed at the bottom of the ocean and is called Kaibab Limestone. All are on magnificent view for us from the helicopter cockpit and from our sightseeing outposts along the river. 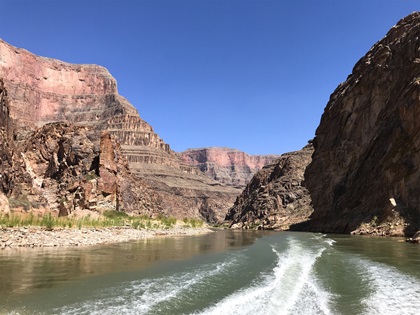 The Colorado River arrived much more recently, about 5 to 6 million years ago, when it began carving the Grand Canyon’s massive stone cliffs and canyons, revealing the ancient history beneath, layer by layer, the park service notes.

A three-hour motorized boat ride allows us to take in the sights while a guide informs us of the area’s history, geology, and inhabitants. Rounding a curve near Separation Canyon exposes huge boulders baking in the sun and radiating heat so intense that it feels like a blast furnace and takes our breath away. At night summer temperatures may drop to the 70s, but our visit coincided with a scorching heat wave. My hat is off to Powell, who lost an arm during the Civil War’s Battle of Shiloh, for withstanding such intense weather swings during his river passage.

Our aerial adventure began from Grand Canyon West Airport after overnighting at the nearby Hualapai Ranch lodge where we experienced a bull-riding machine, a campfire sing-along, and a faux gunfight. 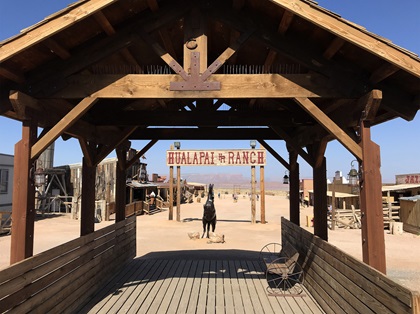 For visitors staying in Las Vegas, about 120 miles west of the West Rim, aerial tour operators including Papillon, Sundance Helicopters, and GC Flight have a variety of packages that include flights over Hoover Dam, Lake Mead, and the Grand Canyon.

When we lift off from the river floor for our return we are again met with an awe-inspiring view. Surprise Canyon and Burnt Canyon reveal themselves as we climb higher in the 100-plus-degree heat to face the sheer cliffs ahead. We skim the canyon rim at 4,800 feet in elevation before touching down at Grand Canyon West Airport’s helicopter landing pads to signal the end of our own Grand Canyon expedition.