Get the app Get the app
AOPA Members DO more LEARN more SAVE more - Get MORE out of being a pilot - CLICK HERE
News & Media Milestones: Tower of Voices sings in the wind

Milestones: Tower of Voices sings in the wind

Remembering the victims of Flight 93

A Pennsylvania field is a “beautiful, yet ugly” reminder of how 40 ordinary citizens stood up to terrorist hijackers who tried to turn an aircraft into a device of mass destruction. 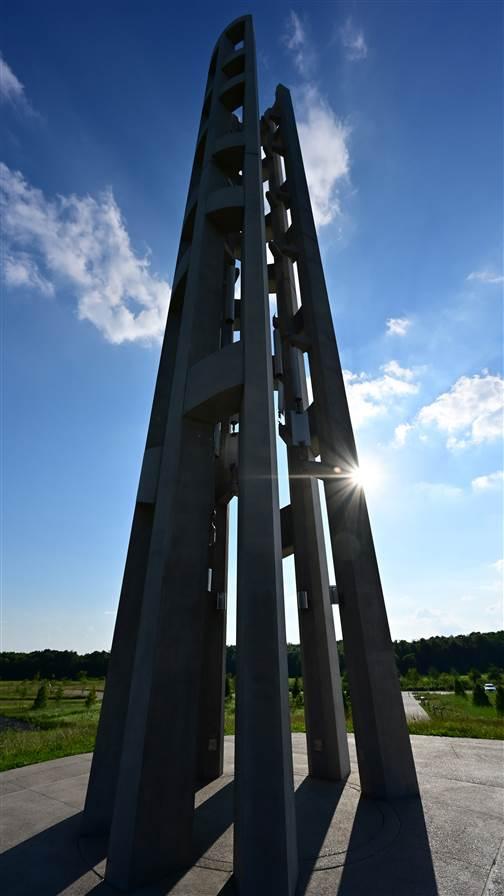 The Flight 93 National Memorial near general aviation’s Somerset County Airport honors the passengers and crew of United Airlines Flight 93 for sacrificing their lives to prevent further human casualties on September 11, 2001.

Phase One of the memorial, which includes the “Sacred Ground” portion that surrounds the entire site, was completed in 2011 for the tenth anniversary of the terrorist attacks. Phase Two includes the interpretive exhibits, aerial walkway, and other architectural features and was completed in 2015. Phase Three, the Tower of Voices—a 93-foot-tall structure with 40 wind chimes that will sing out in the nearly constant mountain winds—was dedicated in 2018. The 40 chimes are in honor of the 40 passengers and crew who lost their lives in the crash. Each chime will deliver a different tone based on the size and diameter of the eight- to 16-inch polished aluminum tubes (only several chimes were operating when we visited). The tower is designed to bring “serenity and nobility” to the site while also adding “dissonance,” according to the National Park Service.

The memorial’s angular aerial walkway marks the aircraft’s flight path before the pavement abruptly ends dozens of yards above a former surface coal field. The field was reclaimed and now yellow sunflowers gaze at the sky near stands of seedling trees planted in groups of 40—one for each person aboard the aircraft. A white marble Wall of Names is at the bottom of the field near a large boulder that marks the aircraft’s impact site. While most of the memorial is open to the public, only family are permitted beyond a gated area into the exact spot of impact.

Somerset County Airport (2G9) is about 10 miles away from the memorial, and a crew car is usually available for pilots. The airport’s 5,002-foot-long runway can easily handle typical GA flight operations, but the field’s 2,275-foot elevation and shifting winds often rushing through the valley should be considered.