Get the app Get the app
AOPA will be closed July 4th, in observance of the Independence Day holiday. We will reopen at 8:30 am ET on Tuesday, July 5.
News & Media Fly-off: Sweeps RV–10 takes on Cirrus SR22

Your AOPA 2020 Sweepstakes RV–10 is often called something it’s not: a Cirrus.

It’s regularly mistaken for an SR22—and that error is understandable. The Sweeps RV–10 is about the same size as the much more numerous Cirrus model, and its gleaming new paint job accentuates the lines that both airplanes share.

Since form really does follow function, the fact that both airplanes are four-seat, long-distance, IFR travelers introduced about the same time (2001 and 2003 for the SR22 and RV–10, respectively) dictates that they should have a great deal in common. And they do.

And they both dominate their categories. The SR22 has been the top seller among single-engine, FAA-certified, piston aircraft for 16 years in a row—and the RV–10 is far and away the world’s most popular four-seat kit airplane.

But the RV–10 and SR22 have major differences, too.

The designers of the RV–10 and SR22 also have fundamentally divergent philosophies and serve vastly different markets. RV–10s are designed for cost-conscious amateur builders, and prices for finished airplanes rarely exceed $250,000. New SR22s are aimed at “lifestyle” customers and have a base price of $655,000 while fully optioned, highly customized models can approach $1 million. 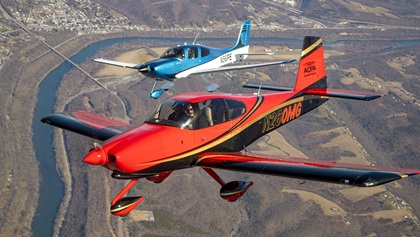 Richard VanGrunsven, founder of Van’s Aircraft, is a minimalist at heart. He emphasizes “total performance,” a term he coined for aircraft meant for a variety of sometimes contradictory purposes: cross-country travel, maneuverability, and short-field performance. Van’s Aircraft models from the single-seat RV–3 (introduced in 1971) to the four-seat RV–10 are mechanically simple, relatively light weight, and highly versatile. They emphasize control harmony, visibility, and economy.

Van’s Aircraft has become the world’s largest maker of experimental/amateur-built kit airplanes with more than 10,700 completed, registered, and flown, including about 1,100 RV–10s.

Alan and Dale Klapmeier, two brothers who founded Cirrus in 1984, set out to build the world’s most technologically advanced and safest single-engine, piston aircraft with their SR20 and subsequent SR22 models. A cuffed wing for spin resistance, a single power lever for operational simplicity, glass-panel avionics with traffic and terrain warnings, and an airframe parachute as standard equipment are among the innovations that the Klapmeiers pioneered in the SR series.

Cirrus is the world’s largest manufacturer of FAA-certified, single-engine aircraft with more than 7,000 SR models delivered to customers around the world.

Our fly-off starts on the grooved surface of Runway 23 at Frederick Municipal Airport at AOPA headquarters in Frederick, Maryland. The RV–10 and SR22 stand side by side on the 100-foot-wide asphalt and rev the engines. Then the pilots release their brakes at the same moment—and the RV–10 surges ahead. 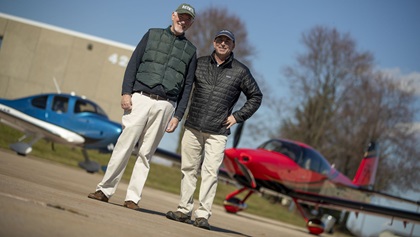 With an empty weight of 1,650 pounds, the RV–10 is 776 pounds lighter than its rival, and its three-blade MT propeller turns full rpm instantly. The SR22, with its single power lever, must wait several seconds for the prop governor to shift into low gear before it can reach its full 2,700 rpm.

Both airplanes carry 60 gallons of avgas and two people. The RV–10’s flaps are retracted (as per the pilot’s operating handbook) and the SR22’s flaps are set at the normal 15-degree takeoff setting. A right quartering headwind at 10 knots and an outside temperature of 50 degrees Fahrenheit mean slightly shorter-than-standard takeoff rolls for both airplanes.

The RV–10 reaches its rotation speed (65 knots) and lifts off in 12 seconds. From my vantage point in the right seat of the RV–10, the SR22 drops back out of my peripheral view as I look forward. But even though I can’t see it, I hear the growl of its three-blade, composite Hartzell prop. 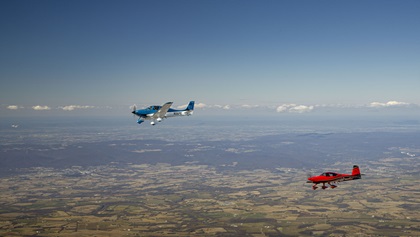 Once outside the airport traffic pattern, SR22 pilot Mike Filucci and I position the two aircraft side by side at 2,000 feet msl, slow to 100 knots, and then simultaneously begin a full-power race to 6,000 feet.

Both airplanes climb at their published best-climb speeds—the RV–10 at 90 knots and the SR22 at 110 knots.

The RV–10 climbs at a slightly steeper angle, and the SR22 delivers more forward speed. The RV–10 reaches the target altitude in 2 minutes 50 seconds, and the SR22 gets there 3 seconds later. The RV–10’s altitude advantage at 6,000 feet is less than 100 feet.

The climb pitted the RV–10’s lighter weight and greater wing area against the SR22’s superior power loading. Both airplanes averaged a rate of climb of about 1,350 feet per minute during the 4,000-foot ascent through light to moderate chop.

Due to the SR22’s faster forward speed, the climb contest is too close to call.

We join the Bonanza A36 photo ship and climb above 9,000 feet to find smooth air, then circle (and circle!) in formation for the photos and videos that appear in this article. Then AOPA Senior Photographer Chris Rose releases us for the aerial drag race event. 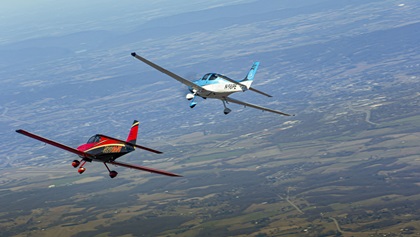 With the RV–10 and SR22 flying side by side about one mile behind the photo ship, the contest pilots push their throttles full forward for an all-out speed dash.

With the normally aspirated (non-turbocharged) engines producing just 22 inches of manifold pressure at full throttle, the rate of acceleration is gradual. But, to my surprise, the two airplanes stay together. There is virtually no relative movement between the RV–10 and SR22 as we blow by the Bonanza (which had kindly slowed to 100 knots to give us plenty of overtake).

We repeat the race to make sure the first result wasn’t a fluke, but the outcome is the same: At wide-open power and level flight at 9,500 feet and nearly standard air temperature, the RV–10 and SR22 reached the same top speed (178 KTAS) at the same time.

Next, the slow-speed events.

We decelerate in level flight with flaps up to see which airplane stalls first.

The moderately loaded SR22 stalls clean at 68 KIAS while the RV–10 flying alongside keeps plodding ahead uninterrupted. The flight controls are mushy in the RV–10 at that slow speed and high angle of attack, but there’s no aerodynamic buffeting or any other indication a stall is imminent.

Then we fully lower the flaps in both airplanes and repeat the deceleration. The SR22 stalls first at 60 KIAS while the RV–10 plugs along with slotted flaps at the full 40-degree setting.

The surface wind was 270 at 10 knots gusting to 18 when both airplanes entered the landing pattern for Runway 23.

The RV–10 typically approaches at 75 knots—but I use a target of 80 knots due to the gusty conditions. Using full flaps, idle power, and the stick full aft at touchdown, the RV–10 touches down at 59 KIAS in a flat attitude and rolls to a stop in about 500 feet using light to moderate braking. (With a forward center of gravity from two occupants, 40 gallons of fuel, and no aft baggage, the RV–10 tends to run out of elevator in the flare.)

The SR22 usually approaches at 80 knots but increases its target speed for the same reasons. The SR22 touches down at 62 knots and rolls to a stop in about 900 feet using light to moderate braking.

Despite their designers’ divergent philosophies, different materials, and distinct target markets, the actual performance of the RV–10 and SR22 is nearly identical.

Their rates of climb, top speeds, and other important metrics aren’t just within shouting distance of each other—they’re within whispering distance. The old maxims that there’s “no replacement for displacement,” and “no such thing as too much horsepower” are irrefutable. But the RV–10’s broad speed range and nimble handling show there’s no substitute for lightness, either. 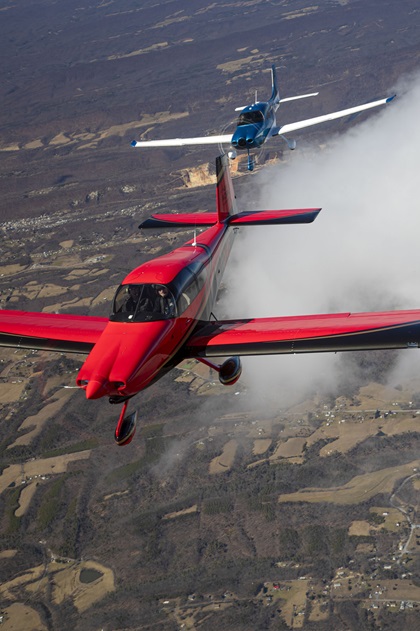 One factor that our fly-off doesn’t address is the Cirrus Airframe Parachute System (CAPS). While flying beside the SR22 over craggy West Virginia mountains during this contest, I envied the safety advantage Cirrus occupants enjoy because of their airplane’s innovative and well-proven airframe parachute.

BRS Aerospace, which invented CAPS, has developed an airframe parachute for the RV–10 and many other general aviation aircraft. BRS has done lifesaving work for GA, and its record of more than 400 saves is noble. If I won the RV–10 in this year’s drawing (which can’t happen because I’m ineligible as an AOPA employee), I’d strongly consider being among the first in the United States to add a BRS parachute. (Others have reportedly done so overseas.)

The 2010 SR22 flown for this report also has the safety advantage of a TKS fluid system approved for flight into known icing conditions, and the comfort factor of air conditioning. The relatively spartan RV–10 has neither, and it surely benefited in this competition because it wasn’t carrying the additional weight those systems bring with them.

Kit aircraft like the RV–10 offer tremendous freedom to use non-TSO avionics and other relatively low-cost innovations. Individual airplanes vary widely in construction quality, and they often lack the documentation, uniformity, and refinement of FAA-certified airplanes. Whether you see those factors as advantages or disqualifiers goes a long way to deciding which of these extremely capable, market-leading aircraft appeals more to you.

The next time someone calls the Sweeps RV–10 a Cirrus, I’ll regard it as a compliment.

Special thanks to Tal Hart of Frederick, Maryland, for flying his SR22 for this article. Other aerial participants included pilots Dave Roy, Thomas Haines, Mike Filucci, and David Tulis. 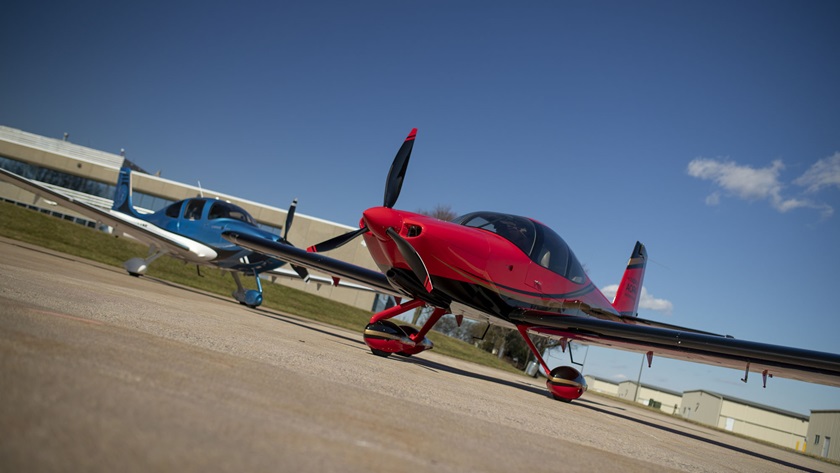 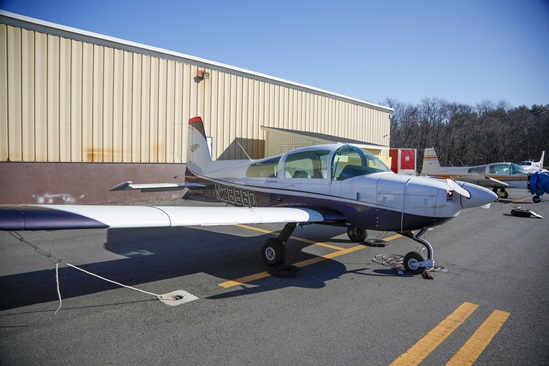 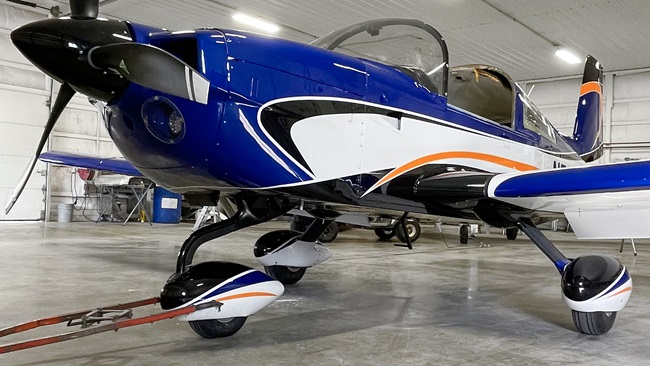