Get the app Get the app
Get the latest news on coronavirus impacts on general aviation, including what AOPA is doing to protect GA, event cancellations, advice for pilots to protect themselves, and more. Read More
Already a member? Please login below for an enhanced experience. Not a member? Join today
News & Media Emergency highway landing captured on camera

The pilot of a Piper Cherokee who picked a fair-weather day to finally get out of the house and fly was forced to land on a busy highway, becoming an instant social media star who handled the emergency without putting a scratch on the airplane. 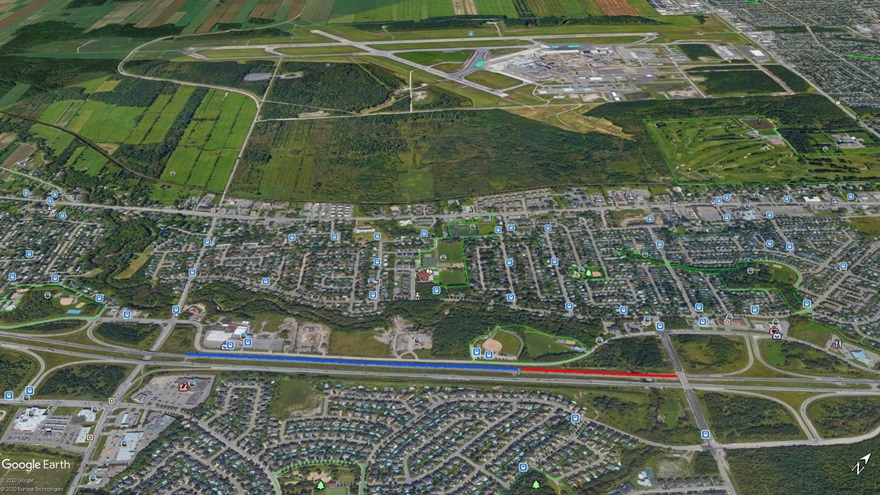 The red line added to this Google Earth image is 1,360 feet long and covers the distance between a bridge and a highway sign that figures in a remarkable emergency Landing on April 16 in Quebec City, Canada. The blue line, just over 3,000 feet long, extends from that sign to the beginning of the off-ramp where the Piper Cherokee was able to move to the side of the road and park.

“I am that pilot,” Florent Gagné confirmed, reached by phone at his home in Quebec City Canada, on April 17, the day after a video posted on Twitter documented his unplanned feat of airmanship and collected the first of what would become millions of views within days.

A retired civil servant who has owned his Piper Cherokee for 25 years, Gagné would have no doubt preferred not to attract so much attention. But landing a single-engine piston airplane in the flow of traffic on a busy highway, in the age of cellphone cameras, will do that.

“It worked rather well,” he conceded, “in the circumstances.” 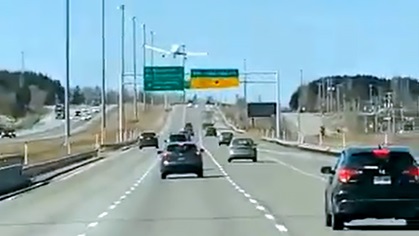 Gagné, 74, said he had never had trouble with carburetor ice in his 1973 PA–28-140 until April 16. Restless and cooped up like the rest of the world during the global coronavirus pandemic, he had been looking forward to some time in the air. He had moved the airplane from its winter hangar to the summer parking spot a week before, and carefully checked it over ahead of this first flight of the spring. Gagné was ready to pounce when the weather turned favorable.

“Yesterday it was a beautiful, sunny, fresh day,” Gagné recalled. “It was rather cold here in Québec, but the humidity was not that important.”

Gagné said he has flown his Cherokee in all seasons, though lately he takes the winters off. The first sign of trouble came soon after departing from Quebec City Jean Lesage International Airport.

A thorough preflight gave Gagné no reason to hesitate. His Cherokee is only a couple of years beyond a major overhaul, with new paint and a new interior.

“That plane is a very good plane,” he said. “It is very well maintained. I’m very fussy about that.”

He fired up the engine, which ran perfectly as he taxied to Runway 29.

“I did a good runup, also, and the engine was running very well,” Gagné recalled. 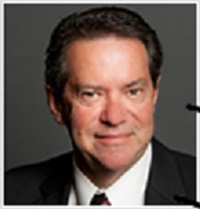 Departing west, Gagné was cleared to climb to 2,500 feet, and was just passing 2,000 when the engine began to run rough.

“It was only for a second or two,” the pilot recalled. It got his attention, but the quick return to normal operation suggested a drop of water might have sneaked into the fuel system. “After another two minutes, not more than that, it started to run rough again.”

Gagné needed no further provocation to turn back toward the airport and request an immediate landing clearance “that I got right away.”

The engine was managing about 1,600 rpm, well short of full power. Gagné worked his emergency checklist, including mixture full rich and carb heat on.

“I did everything that they teach us,” Gagné said, noting the engine performance “probably got a little worse after I put the carb heat on.”

He had a clear view of the airport, but there was an obvious problem with the plan: He was losing altitude quickly, sinking below the pattern altitude.

“I had the airport in sight, right in front of me, about two or three kilometers,” Gagné recalled. But with just 800 or 900 feet of altitude remaining, he realized that his prospects of making the runway with available power were dim.

“I told the controller at that time that I was going to land on the highway, 40, here in Québec City.”

Autoroute Félix-Leclerc, as the highway is officially known, is often jammed with traffic, but Gagné expected to find less than usual, given the social distancing directives in place in Canada (and most of the rest of the world). “The roads are supposed to be less busy than [usual], but yesterday, there was a lot of traffic.”

The longtime pilot pointed out that close attention to the video, filmed from a car that was also westbound on the highway connecting Quebec City and Montreal, reveals black smoke just visible from the exhaust of the stricken Piper, close enough to be seen from the moving cars below. The approach took him over a bridge on final, followed by a highway sign spanning six lanes of the divided highway, the bases of which are about 1,350 feet past the bridge. That left Gagné just over 3,000 feet of slightly inclined, three-lane highway to work with.

A convenient gap in the traffic gave him space to put the Piper down with authority, no bounce, and join the flow of westbound traffic.

Still producing about 1,600 rpm, the stricken engine produced just enough power to allow Gagné to politely pull to the right, opening up a lane for passing traffic. His arrival appeared to catch some drivers by surprise, but the vehicles managed to slow and pass through the opening without putting a scratch on the airplane. 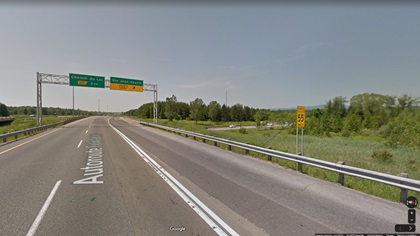 Gagné did not have to wait long for roadside assistance. Within minutes, six or more police cruisers and at least two fire trucks were on the scene.

“I always wonder why they come [with such a] big arsenal,” Gagné mused, though it turned out to be handy having some help pushing the airplane more fully out of the travel lanes. Gagné had stopped just short of the airport exit, just over 1 nautical mile from the runway he had hoped to land on when he took off minutes before. Gagné summoned one of his two sons, who is also a pilot, to give him a ride.

With the help of some lumber to make up for the Cherokee’s wider-than-a-car wheelbase, the airplane was loaded on a flatbed in relatively short order, and Gagné and his son followed the “caravan” for the short drive back to the airport. Once it was back on the ramp, Gagné climbed back inside and started the engine, which ran beautifully.

“I was just, you know, ready to go back and try it and go back up there,” Gagné recalled. “I decided to make a big boy of myself to go back to parking and wait for the mechanic to come.”

Further inspection by the mechanic found no anomalies. The ice had probably melted off on the shoulder of the highway. Gagné noted that the black smoke visible in the video suggests that he might have had a slightly less exciting day had he leaned the mixture “maybe a little” while still in the air, though that’s not what the factory checklist instructs. He did not express regret, however.

“I’m alive, and there’s not even a scratch on the plane,” Gagné said.

“But there is a scratch in my pocket,” he added: The trip from highway off-ramp to airport set him back close to $1,000.

Gagné may by now have had the chance to make an actually relaxing flight, and he will likely be as meticulous as ever when it comes to preflight and runup. But he’s clearly prepared for whatever might arise. 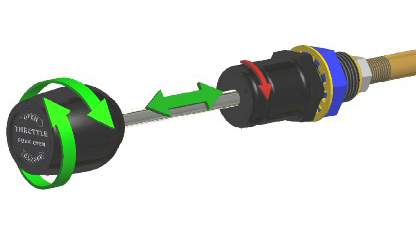 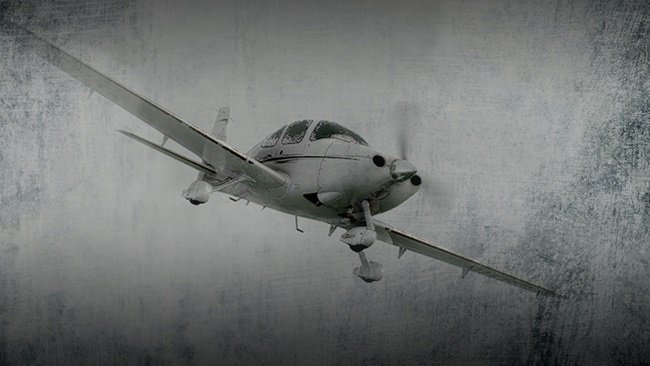 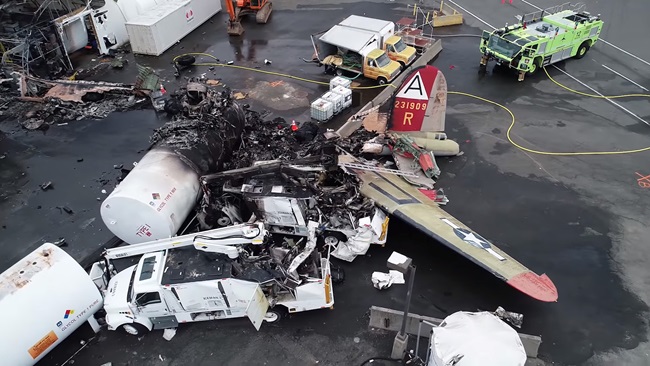