Get the app Get the app
Get the latest news on coronavirus impacts on general aviation, including what AOPA is doing to protect GA, event cancellations, advice for pilots to protect themselves, and more. Read More
Already a member? Please login below for an enhanced experience. Not a member? Join today
News & Media Student pilot, instructors help medical professionals

Editor's note: This article was updated May 4 with T.J. Kim's additional recognition by the White House on May 1.

Sixteen-year-old student pilot T.J. Kim was supposed to solo in March, but the upheaval caused by the coronavirus pandemic put a hold on those plans.

As he embraced the new realities that social distancing guidelines imposed on his lifestyle, Kim wanted to find a way to combine serving his community with his passion for flying, an activity that Virginia officials have continued to allow in certain limited circumstances. He talked about his ideas with his father and his flight instructors at Aero Elite Flight Training at Leesburg Executive Airport. “Operation SOS”—or “Supplies Over the Skies”—was created to offer a quiet contribution to medical professionals in the state, but it ended up garnering unexpected, broad national attention for the high school sophomore.

Kim and his flight instructors shifted their attention to the cross-country portion of his flight training, and selected seven airports with increasing distance in Virginia that they could fly to while bringing along supplies to help battle the virus. They identified the seven critical access hospitals in rural Virginia that were struggling to acquire all the medical supplies they needed, and then planned flights to nearby general aviation airfields to drop off resources such as gloves, masks, protective eyewear, and sanitizer acquired by Kim’s family and friends in the Washington, D.C., area. 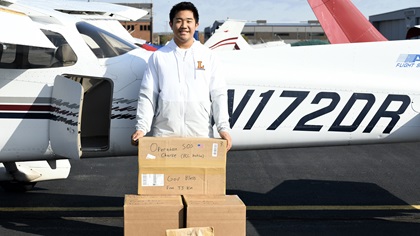 “When he came up with the idea and asked us if this is something that would be OK, we were all too enthusiastic to help in any way we could,” said Tim Fischer, Aero Elite president and chief flight instructor. “It's been an absolute pleasure working with T.J. to bring these much-needed supplies to hospitals that desperately needed them.”

On their first flight to Luray, Virginia, on March 27 to deliver equipment to the nearby 25-bed rural hospital, Kim and his instructor were met by two appreciative hospital employees and no fanfare. That would change for subsequent flights when a former football coach of Kim’s, a longtime inspiration and mentor who also happens to be a journalist with the Associated Press, interviewed Kim about the flights. Almost overnight, Kim’s story was picked up by national media outlets ranging from The Washington Post and CBS News to Teen Vogue magazine. The news and positive commentary about Kim even earned him mentions from the Twitter accounts of the White House and the first lady of Virginia.

During the coronavirus pandemic, many states have enacted widely varying limitations on general aviation and personal travel while stay-at-home orders are in effect. Guidance related to GA activity from the Virginia Department of Aviation published on April 17 significantly limits recreational flying and most dual instruction but acknowledges exceptions can be considered for volunteers participating in relief missions.

AOPA recently published a state-by-state guide to help pilots understand current directives in their state. Pilots are encouraged to check with their state officials for clarification.

“It has been surreal,” Kim said of the media attention. “It is really humbling.”

In subsequent flights, the student and his instructor were met at airports by news media and cameras, along with balloons and signs made by hospital workers thanking them for the much-needed help.

In spite of all the attention, the young student pilot has stayed focused on flying and the rich safety lessons he can gain on such long trips.

Kim says he has learned about the differences between cross-country flying and the traffic pattern environment he was accustomed to in his presolo flight training.

“It’s obviously very different, the amount of planning that goes into it beforehand. I’ve learned how to chart flights, a lot about airspace, a lot about runways, because before, I would just take off and land at Leesburg, but now I am going to different, unfamiliar runways.”

On longer cross-country trips to the farther reaches of Virginia, Kim notes that the weather can change dramatically, an important lesson for a student pilot.

Kim and his instructors have paid careful attention to health safety guidelines during the pandemic, such as wearing masks and gloves while in the aircraft and staying home when not flying. But the largest safety lessons Kim is learning relate “mostly to weather, winds, cloud formations, and turbulence.”

Aero Elite instructor Bobby Chahal told AOPA, “for someone who is learning about their private pilot certificate, it is very important that they don’t fall into the traps of pressure and be enticed to make decisions that are going to get them into situations. Nothing about our aeronautical decision-making is outside our norms that we expect of our private pilots. If weather is not favorable or we need to change our timing, that is not a problem.”

Kim has been passionate about aviation since he was 9 years old, and has been absolutely clear on his career aspirations. “I want to fly Navy F–35s off aircraft carriers,” he said, noting that the new F–35C is his favorite aircraft. He has ambitions to attend the U.S. Naval Academy when he graduates from high school.

When asked what he would say to his peers who are inspired by his activity, Kim said, “the message is more about helping others, whether you can fly or not. Use your abilities to help others.”

On May 1, President Donald Trump invited Kim and Chahal to the White House where Kim was honored during a Presidential Recognition Ceremony highlighting citizens who have responded to the pandemic with what the president called, “determination, courage, and grace.” The president lauded Kim for his efforts and encouraged his ambitions for a future career as a military aviator. Kim was given the opportunity to make remarks, during which he spoke of the many other young people serving their communities by sewing masks, delivering groceries to the elderly, and writing thank you letters to front line workers. Humbled by comparing himself to these many other youths, Kim directly addressed the president by saying, “I am so honored by this award, and I don’t know how to repay you. So, let me make this promise to you instead: As long there is a need, and as long as I can find the PPEs and fly them to rural hospitals, I am going to do it.” 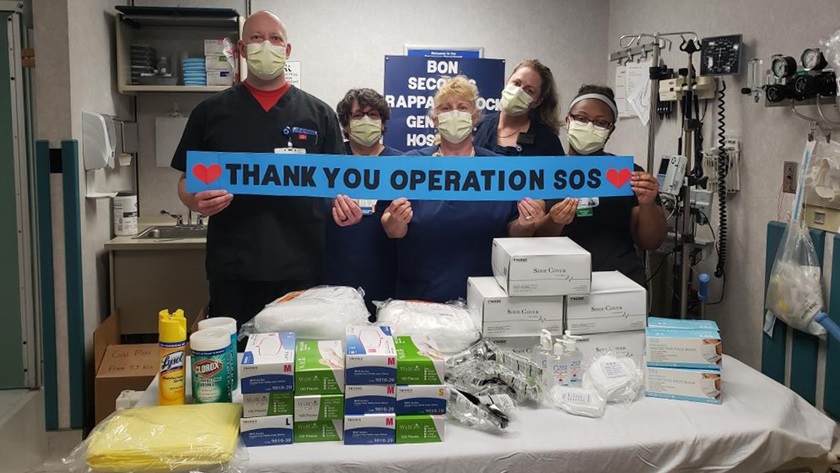 AOPA Senior Director, Outreach and Events
Chris began working for AOPA in 2013, but has been a private pilot and AOPA member since 2001. He flies VFR all over the country both for fun and as a part of his role leading AOPA events and regional fly-ins.
Go to Chris Eads's Profile
Topics: Flight Instructor 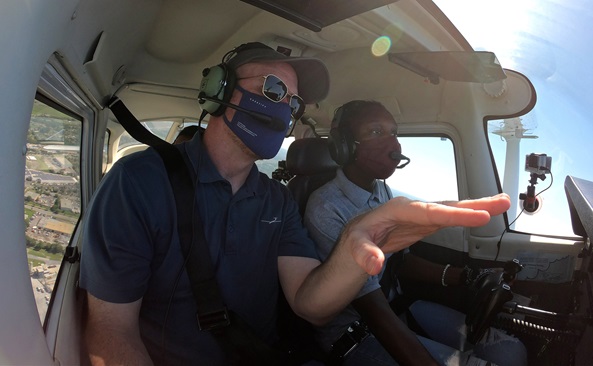