Get the app Get the app
Get the latest news on coronavirus impacts on general aviation, including what AOPA is doing to protect GA, event cancellations, advice for pilots to protect themselves, and more. Read More
Already a member? Please login below for an enhanced experience. Not a member? Join today
News & Videos Flyovers pay tribute to medical workers

Flyovers are becoming a trend as aviators look for ways to support and encourage their communities during the coronavirus pandemic. 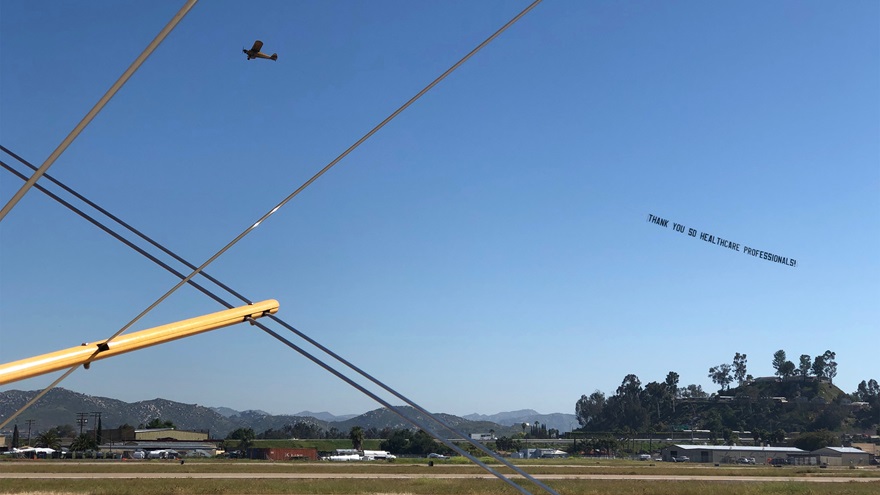 In addition to the formation flyovers, a banner-towing operation brought a message of thanks to the medical professionals of San Diego. Photo courtesy of Phil Kendro.

From flyovers by the U.S. Air Force Thunderbirds and Navy Blue Angels in several major cities to the Southern California Skytypers’ aerial message of hope to an Air Force flyover of Kansas City, Missouri, hospitals and a formation flyover of vintage and modern general aviation aircraft in San Diego, pilots and their aircraft are paying tribute to first responders and medical professionals on the front lines battling the coronavirus. More flights of a similar nature are planned for the upcoming weeks in North Carolina, New York, and other locales.

Who doesn’t like an airshow? With all mass gatherings suspended nationwide to ease the spread of the coronavirus, effectively shutting down the airshow industry for the time being, pilots are finding ways to safely bring the airshow to the people in the places where they live and work.

On April 24, 14 GA pilots in San Diego brought together a diverse set of aircraft in a series of formation flights to honor professionals at a dozen major medical facilities in the area. A five-ship formation of Boeing Stearmans took the lead, ranging in vintage from 1929 to 1941. A second formation of Beechcraft T–34s followed shortly, and then a series of iconic low-wing singles—including a Mooney, a Beechcraft Debonair, and a Beechcraft Bonanza—flew in trail behind.

The event was put together by veteran Marine aviator and United Airlines pilot Phil Kendro, who has extensive experience working with airshows in the region. His perspective on the value of the flights was partly inspired by his wife, who works at Sharp Memorial Hospital, one of the flyover targets, and a nurse at another local hospital who asked Kendro if he could organize a flyover similar to one she had heard of in the Midwest. 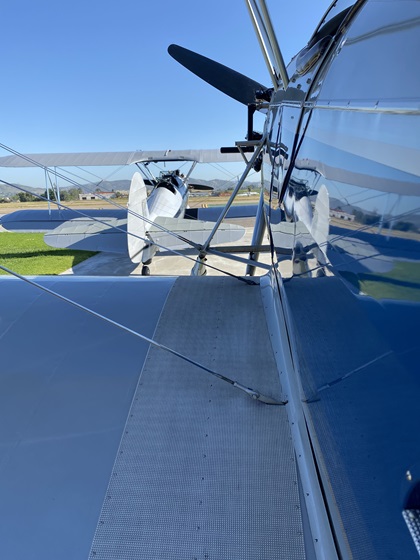 Pilot George Watson, who flew his 1956 Beechcraft T–34 in the event, also had a unique perspective on the workers at Scripps Memorial Hospital in nearby La Jolla: He had a successful heart surgery there in 2018.

The health care workers were certainly appreciative. A report suggested as many as 100 personnel at one of the hospital facilities poured into the streets with their cellphone cameras turned skyward. They practiced proper safety protocols: They were all wearing masks and standing at least six feet apart, while other colleagues watched from—and in some cases, danced in front of—large windows on upper floors of the facility.

“The community may not realize how important their gestures of thankfulness are to the women and men caring for our patients,” a nurse at Sharp Grossmont Hospital told reporters from the Times of San Diego. “They are reignited and inspired when they are told thank you, or even witness a ‘virtual hug from the community.’”

“We wanted to highlight our awesome medical professionals in San Diego,” said Kendro. “This was something for them to get outside, enjoy themselves, and take a quick break. They got lots of notice, press, and publicity, and that is exactly what we were trying to do for them.”

Kendro also noted sincere appreciation for the several air traffic control facilities that supported the flights, which transitioned multiple airspace sectors. “Friday’s event could not have occurred without the awesome help of our local air traffic controllers and aviation leadership,” he said.

In coming weeks, several organizations and flight teams are planning similar tribute flights in other parts of the nation. 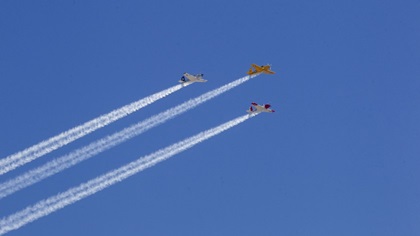 In North Carolina, the Bandit Flight Team plans to perform a flight of multiple Van’s Aircraft RVs over five medical facilities in the Raleigh-Durham area on May 14. Partnering with local television station WRAL and the North Carolina Healthcare Association, the flight is scheduled to be performed between 7 and 7:25 p.m. Eastern Daylight Time during a live special presentation on the television broadcast. The date was chosen by the health care association to correspond with National Hospital Week, which runs May 10 through 16, sponsored by the American Hospital Association.

In western New York, plans are underway to conduct a three-city tribute flyover by the classic Douglas C–47 Skytrain known as Whiskey-7, based at the National Warplane Museum in Geneseo. Those flights are scheduled to occur over Buffalo/Niagara, Rochester, and Syracuse on May 16 and 17. Mission organizer Todd Cameron said, “This is a tremendous opportunity for us to say thank you to many, to honor the challenges and those who persevere through them, and to give everyone a reason to look up and smile!”

AOPA Senior Director, Outreach and Events
Chris began working for AOPA in 2013, but has been a private pilot and AOPA member since 2001. He flies VFR all over the country both for fun and as a part of his role leading AOPA events and regional fly-ins.
Go to Chris Eads's Profile
Topics: Airshow