Get the app Get the app
Get the latest news on coronavirus impacts on general aviation, including what AOPA is doing to protect GA, event cancellations, advice for pilots to protect themselves, and more. Read More
Already a member? Please login below for an enhanced experience. Not a member? Join today
News & Videos Boosted Bristell

If you think “light sport” automatically translates to “underpowered,” then you haven’t met the Bristell 915. 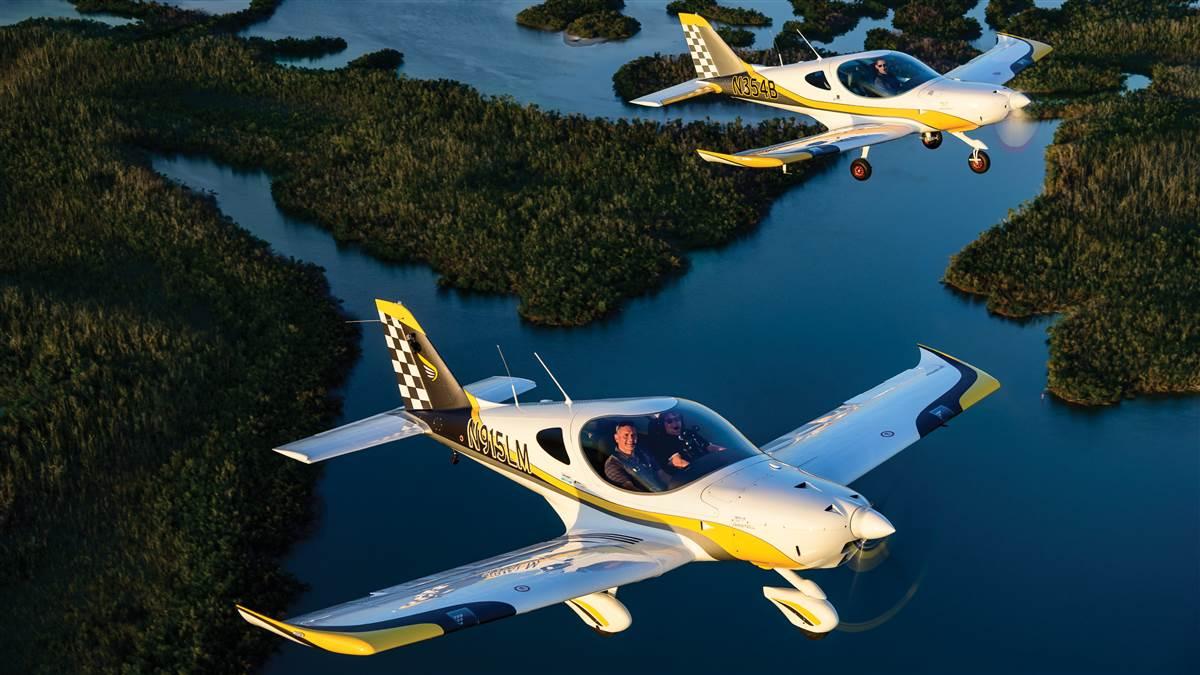 The Bristell 915 (foreground) has more horsepower than the Bristell on its wing. (Photography by David Tulis)

To be fair, we don’t generally equate light sport with power. The regulations define light sport aircraft as having a maximum airspeed of 120 knots calibrated—not an issue for aircraft that are largely driven by 85- and 100-horsepower engines.

Now comes the Bristell 915. As the name indicates, there’s more under the cowl: 35 more horsepower than the Bristell Classic, which hit the U.S. market in 2013. The newcomer has a 135-horsepower fuel-injected Rotax 915iS turbo. Want an LSA with some muscle? The Bristell 915 is for you.

But maybe we should start by talking about who the 915 is not for.

“First of all, it’s too heavy,” said John Rathmell, national sales manager for Bristell Aircraft in Lititz, Pennsylvania, a U.S. dealer for the Bristell. The airplane is manufactured by BRM Aero in the Czech Republic.

To be flown as a light sport aircraft in the United States, an LSA’s maximum takeoff weight is limited to 1,320 pounds if operated only on land. Other Bristell models with lighter Rotax engines have an empty weight of 705 pounds. But the Bristell 915’s empty weight is 820 pounds, owing in part to the heavier Rotax 915iS, which is 70 pounds heavier than other Rotax engines.

That cuts into the useful load, which comes out to be about 500 pounds, compared to 615 pounds for the Bristell Classic. So, if you’re looking for an airplane that can carry your big-boned brother-in-law, yourself, full fuel, and some luggage—and remain legal for LSA purposes—the Bristell 915 is not for you.

But if you’re looking for something a little faster, a little more powerful—an airplane you can fly all day between 8,000 and 15,000 feet that will get you in and out of high density altitude airports with panache—then the Bristell 915 might be for you.

Fast on the ground

“That looks fast standing still,” a New Zealand airplane enthusiast wrote when I posted a photo of the Bristell 915 on Facebook. He wasn’t wrong. The Bristell’s low wing and canopy evoke speed. The airplane sported a black and yellow checkered-flag wrap, and it did not look at all ironic.

Aside from the engine, the 915 is basically the Bristell Classic. It retains the comfortable, 51-inch-wide cockpit and the mostly aluminum construction (the cowling and rudder are carbon fiber). It still has adjustable rudder pedals. There’s been no change to the huge canopy, which folds forward like that of a Diamond and can be opened and closed easily with a single latch. The airplane holds 31.87 gallons of fuel, 30 usable, and can be flown with either 100LL avgas or 90 octane auto fuel.

It’s soon apparent what has changed when you fly the 915, which I got to do when Rathmell brought the 915 to Frederick Municipal Airport from his home airport in Lancaster, Pennsylvania.

Climbing in is not difficult; one foot on the wing step, other foot on the wing, which has been structurally reinforced. Step onto the seat, using one of the handholds in the panel or in the center of the seats. Lower yourself onto the seat. For this flight, with rudder pedals adjusted full aft, I needed a seat cushion to get the best view, but at 5-foot-3 I am accustomed to using a seat cushion. The seats are not adjustable, so a shorter person also may need a back cushion to ensure she can comfortably reach the Garmin G3X display. The airplane is said to fit a 6-foot-5-inch pilot comfortably.

The airplane’s joystick has three buttons: push-to-talk switch, electric trim adjuster, and a button lower on the column itself that switches the frequencies in the number one com radio. That’s a handy addition, except when you accidently flop the frequencies, as I did.

The Bristell has a sort of glove box between the two seats that is just the right size to store a pair of sunglasses. Behind the two seats there’s storage space that can hold 33 pounds—certainly enough for one or two medium-sized bags, and your flight bag. A wing locker on each side, secured with a key, offers additional storage. Each locker holds 40 pounds. Put a quart or two of oil in there and some cloths and cleaner, and you’re ready for the next cross-country.

The 915 started easily with the characteristic clatter a Rotax seems to make when you haven’t heard one in a while. Taxiing out, the hand brake was sensitive but not overly so. It locks in place when you are ready to do a runup. The steerable nosewheel is a nice addition. Rathmell later demonstrated a favorite trick: He shut down the Rotax while maneuvering the airplane 180 degrees into its parking space.

Ground had directed us to taxi to Runway 5 at Frederick, but indicated we’d need to do an intersection takeoff because of a disabled airplane at the threshold. That gave us about 2,400 feet of runway to play with, and it was more than enough. With two adults and 20 gallons of fuel, the Bristell was up and off the runway in 300 feet.

Climbing to 10,000 feet, we kept the Bristell’s nose at a 12.5-degree pitch attitude to achieve VY of 65 knots. We climbed at better than 1,200 feet per minute all the way up, helped in part by a four-blade DUC Helices Flash 3 composite propeller, which is optional. The ground-adjustable DUC propeller looks as good on the ground as it works in the air, adding a bit of warbird style to the design.

We passed over the cement plant in Westminster, Maryland, and I blinked, because it looked smaller than usual; I realized we were at 5,000 feet and climbing, whereas usually I’m overflying the cement plant on my way to 3,000 feet. We reached 10,000 feet in 7.5 minutes.

“So, if getting to smoother air matters to you, this airplane might be your answer,” Rathmell said.

Now, about the airspeed. The regulations governing light sport aircraft limit the performance to 120 knots calibrated airspeed. At 10,000 feet msl, we were doing 124 knots indicated, resulting in 145 knots true airspeed.

The Garmin G3X panel was configured to display performance, altitude, and attitude on the primary flight display and a moving map with ADS-B In on the multifunction display. On this airplane the G3X had Bluetooth capability so the pilot and passenger could listen to music through the audio panel.

The Bristell handles nicely and feels solid. During a power-off stall, the break was gentle. I flew the approach to the power-on stall recovery at 65 percent power, lest the 915 keep us hanging in the air. It took some doing to stall the airplane, but it eventually did, and the break was not abrupt. It’s worth noting that the Bristell does not have a stall warning horn. A GI 260 angle of attack indicator is included in the signature Garmin G3X touch radio package, which at $38,278 is about $10,000 more than the basic package. The signature package also includes two displays.

Heading back to Frederick, we slowed the airplane to 75 knots and added full flaps. We then retracted the flaps all at once instead of incrementally (I know what you’re thinking). The airplane barely rippled in response. That will make many flight instructors sleep easier at night.

Light on its wheels

As with other LSAs, you can’t expect to pull off the power on final and float to the ground in a Bristell. You’ll want to leave in just a bit of power. The Bristell lands nicely when you do that. Keep the stick back and nosewheel up, Rathmell advised: Doing so gives you additional rudder authority on the ground. Let the nose fall too soon and rudder authority is sloppier; the airplane wallows.

As a final demonstration, Rathmell took the airplane around the pattern and requested permission to land on Runway 30. When cleared to do so, he aimed the airplane at the edge of the runway and we were down and stopped at the intersection of Runway 30 and Taxiway A—a distance of about 600 feet—with a knot or two of a tailwind.

With an IFR avionics package, leather interior, and advanced paint scheme, the Bristell 915 goes out the door at approximately $281,000—a figure Rathmell acknowledges won’t endear the airplane to the “what happened to inexpensive LSA” audience. “If you’re flying at sea level, do you need to go to $280,000?” he said. You could stick with a base model with a 100-horsepower Rotax 912 and pay about $150,000.

But consider this: Bristell customers asked for this boosted engine. They envision a world in which an SLSA can climb at 1,200 to 1,500 feet per minute.

If pilots want such a beast and are willing to pay for it, who are we to argue? There are plenty of LSAs at different price points to go around. 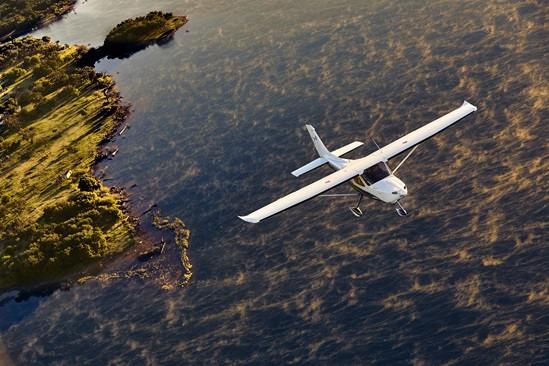