Get the app Get the app
AOPA Members DO more LEARN more SAVE more - Get MORE out of being a pilot - CLICK HERE
News & Media Craftsmanship: Made to order

Craftsmanship: Made to order 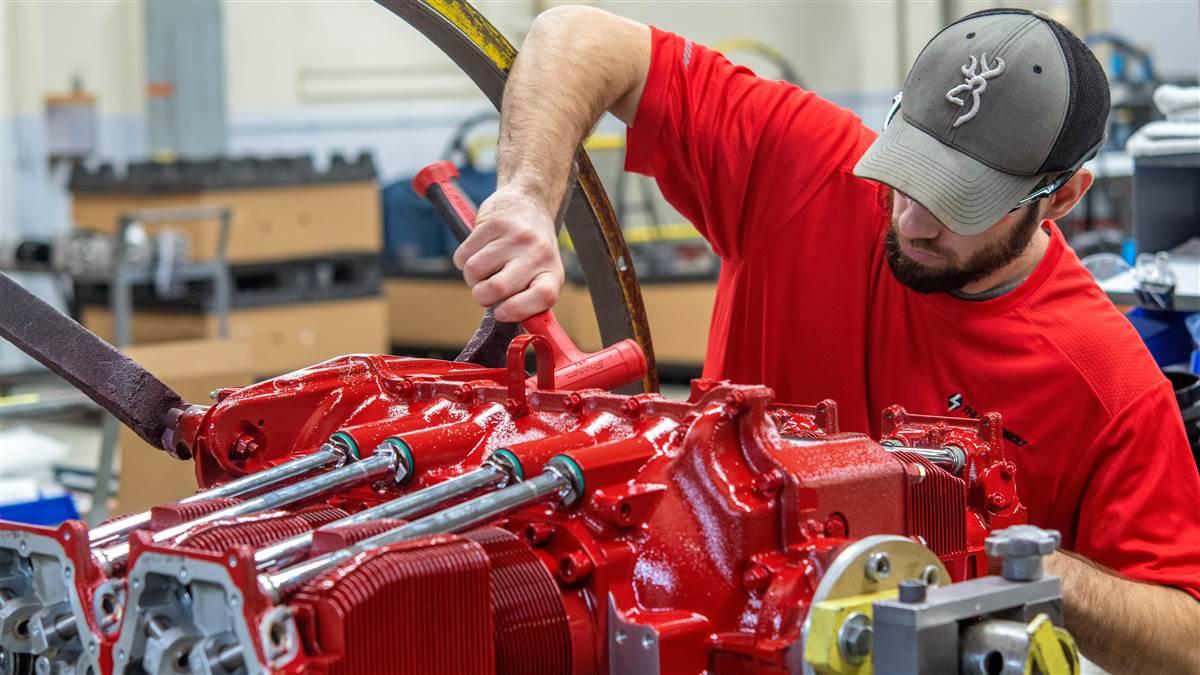 Instead of being made on an assembly line, each Thunderbolt engine is hand-built by two-person teams drawn from the company’s top technicians. Also, most of these experimental-category engines contain performance-enhancing mods such as high-compression pistons, cold-air induction, and electronic ignition designed to increase horsepower and flight efficiency.

“The people who build these engines are the most skilled people we’ve got,” said Levi Schappell, Thunderbolt production supervisor at the century-old Lycoming plant in Williamsport, Pennsylvania. “Everyone in Thunderbolt is a self-starter, and they’ve got to have a broad area of knowledge and experience before they can even apply. Then they’ve got to pass an extremely difficult, hands-on test.”

Thunderbolt engines are non-TSO versions of factory models, and much is demanded of them. All of the engines in the Red Bull Air Race series were Thunderbolt models, and many top airshow performers use them, too.

The engines are more evidence of the ongoing shift toward customization and personalization in general aviation. Thunderbolt engines cover the full spectrum of Lycoming models from the four-cylinder O-235 to the eight-cylinder IO-720—although the IO-390 and IO-580 are the most popular. Each Thunderbolt engine sells for a $4,000 premium compared to those built on the assembly line.

Lycoming expects to build more than 114 Thunderbolt engines this year, up from 74 in 2019.

Van’s Aircraft kit builders are the largest group of Thunderbolt customers because the Lycoming IO-390 is the engine of choice for the newest RV–14 kit airplane. Extra Aircraft in Germany uses both stock and Thunderbolt engines for its Unlimited aerobatic airplanes.

All Thunderbolt cylinders are ported and polished to increase efficiency, and pistons and connecting rods are balanced to within a half gram for smoothness. Lycoming says there’s no empirical data to prove Thunderbolts are more reliable than the company’s stock piston engines—but as evidence of their reliability, Thunderbolt managers point to the fact that none of the Red Bull Air Race engines failed during the many hours of torturous use they underwent during years of demanding competition around the world between 2003 and 2019.

“The engines themselves held up just fine,” Schappell said, “and many of the air race teams used the same engine season after season.”

It’s an untimed, open-ended effort in which the applicant is given a box of parts and a manual and told to build a complete engine. It typically takes two full days to assemble the engine under scrutiny from a team leader. Then the engine is completely disassembled and closely inspected. No flaw is too minor.

The test to join the Thunderbolt team is an untimed, open-ended effort in which the applicant is given a box of parts and a manual and told to build a complete engine.“My test engine was an IO-360 M1A,” said Paul Zener, 43, a wiry, native Pennsylvanian who has been a Thunderbolt technician since 2018. “I’ve always loved engines and loved building stuff. I developed my mechanical skills as a kid, mostly by working on motorcycles and cars.”

Zener worked alongside his dad in a machine shop at a steel mill before coming to Lycoming. He says he doesn’t have a favorite type of engine, but he said he’s noticed a surge in four-cylinder IO-390s.

“I’ve been building lots of 390s lately,” he said. “Like anything else, the more of them you build, the easier they get.”

Each technician has personal strengths and preferences, and Thunderbolt builder Tom Wagner’s specialty is cylinder polishing and porting—painstaking work that he does by hand.

A veteran muscle-car restorer and racer, Wagner has developed an intuitive sense for optimizing the flow of air into an engine. He enjoys the challenge of building a variety of engines as well as avoiding repetitive tasks.

“Here, you do everything on an engine, so each day is different,” he said.

Wagner said the first Lycoming engines he worked on were rare, liquid-cooled models that reside under the hoods of vintage cars: Duesenbergs, Auburns, and Cords.

“The Duesenberg had a supercharged engine in the 1930s, and that technology was incredibly advanced for its time,” he said. “The term ‘It’s a doozy,’ came from Duesenberg because they were so distinctive. Even the sound of their engines set them apart.” (Merriam-Webster says the term predates the car—but Wagner’s tale is a good story.)

The Thunderbolt program started as a way for a few factory technicians to try boosting the performance of a few tricked-out race engines, but it’s become a mainstay at the Lycoming factory.Wagner, 57, said the free-wheeling world of auto racing and the standardization that goes into building aircraft engines are vastly different disciplines.

“In race cars, you have to figure out everything for yourself, you fabricate your own engine parts, and you’re pretty much on your own,” he said. “Here, we’ve got strict procedures for everything we do, and we’ve got other people looking over our shoulders and double-checking our work.”

Wagner said aircraft engines are a fascinating mix of old and new technologies. “I’ve got a great appreciation for the subtle but continuous design improvements that have gone into aircraft engines over the years,” he said. “It’s impressive—and it never stops.”

Some Thunderbolt technicians are airframe and powerplant mechanics—but not all.

The increase in orders has created a delivery backlog, but Lycoming managers say they don’t push workers to hurry so they can boost output.

“Each engine we build is different, so there’s no way to know at the beginning of the process exactly how many hours it will take to complete,” Schappell said. “Safety and quality are our priorities and we discuss them daily. We’re not going to rush to get an engine out the door. They’re delivered when they’re ready to be delivered.”

It generally takes between eight and 10 working days to build and test a Thunderbolt engine. “I’ve done it in as few as six days when all the stars align,” Schappell said, “but you can’t always count on that.”

Posters of Thunderbolt customers, including airshow performers Mike Goulian and Sean D. Tucker, are tacked on the walls in the small Thunderbolt portion of the sprawling Lycoming plant. Customers typically come in about once a month to tour the facility and meet the workers who prepare their engines.

“They were so accommodating,” Meredith said. “They made time to really understand my situation and come up with a game plan. They discovered their cold-air induction system wouldn’t work and changed it so there were no surprises when it was time to install.”

“When you go to a race or an airshow and you see how much is demanded of these engines, it’s humbling. It makes you focus on doing everything you can to make sure they’re as good as they can possibly be.” —Levi SchappellMeredith has flown about 200 hours with the new engine and said it runs “like a dream.”

“It runs cool, and it’s very consistent,” he said. “Even during aerobatic flight, the engine just provides smooth, reliable power.”

Each engine is run for up to three hours in a test cell before delivery.

The Thunderbolt program began in 2006 and some of the first engines are coming back to the factory for overhaul. None have experienced failures in the field, Lycoming officials said.

The Red Bull engines are parallel-valve IO-540s with 10:1 pistons and cold-air induction systems. Pilots typically run them at up to 3,000 rpm during races—well above the normal redline of 2,750 rpm.

“When you go to a race or an airshow and you see how much is demanded of these engines, it’s humbling,” Schappell said. “It makes you focus on doing everything you can to make sure they’re as good as they can possibly be.”

The Thunderbolt program started as a way for a handful of factory technicians to try boosting the performance of a few tricked-out race engines, but it’s become a mainstay at the Lycoming factory. As the market for non-TSO equipment has grown, Lycoming has realized that some customers are willing to pay a premium for the customization and personalization found in Thunderbolt engines.

Products pioneered in the Thunderbolt area such as electronic ignition systems, electronic fuel injection, and FADEC have taken hold in other parts of the factory. Even small things like silicone rocker cover gaskets that Thunderbolt introduced have replaced cork gaskets throughout the plant as standard on all new Lycoming engines.

In the future, some of the advanced technology found on products like the Lycoming iE2—a highly computerized, six-cylinder engine used on the Tecnam P2012 Traveler—may migrate to four-cylinder experimental engines that the Thunderbolt team produces. The iE2 first flew on a Lancair Evolution and it has a push-button start; is capable of running on leaded or unleaded fuel; and can replace propeller, throttle, and mixture knobs with a single power lever.

Meanwhile, the Thunderbolt team and orderbook are expanding as a result of growing demand for its handmade products. “The bottom line for us is that we’ll do whatever our customers want us to do,” Schappell said. “As long as we continue pleasing them, that’s what matters to us.” 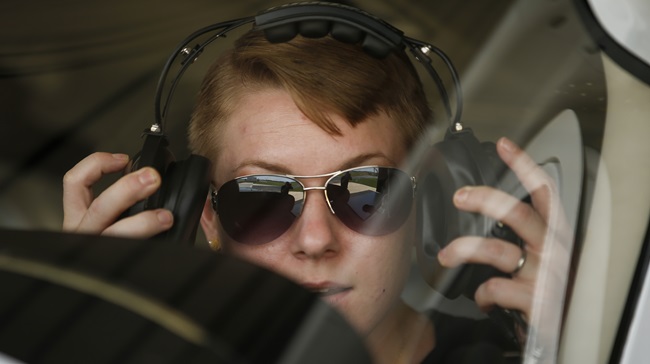