Get the app Get the app
AOPA Members DO more LEARN more SAVE more - Get MORE out of being a pilot - CLICK HERE
News & Media Technique: Landing like a pro

Don’t be a slave to your checklist

There are many perfectly fine ways to fly and land an airplane. As an FAA designated examiner, I see a wide variety of techniques and have gleaned some great practices that I incorporate into my own flying. 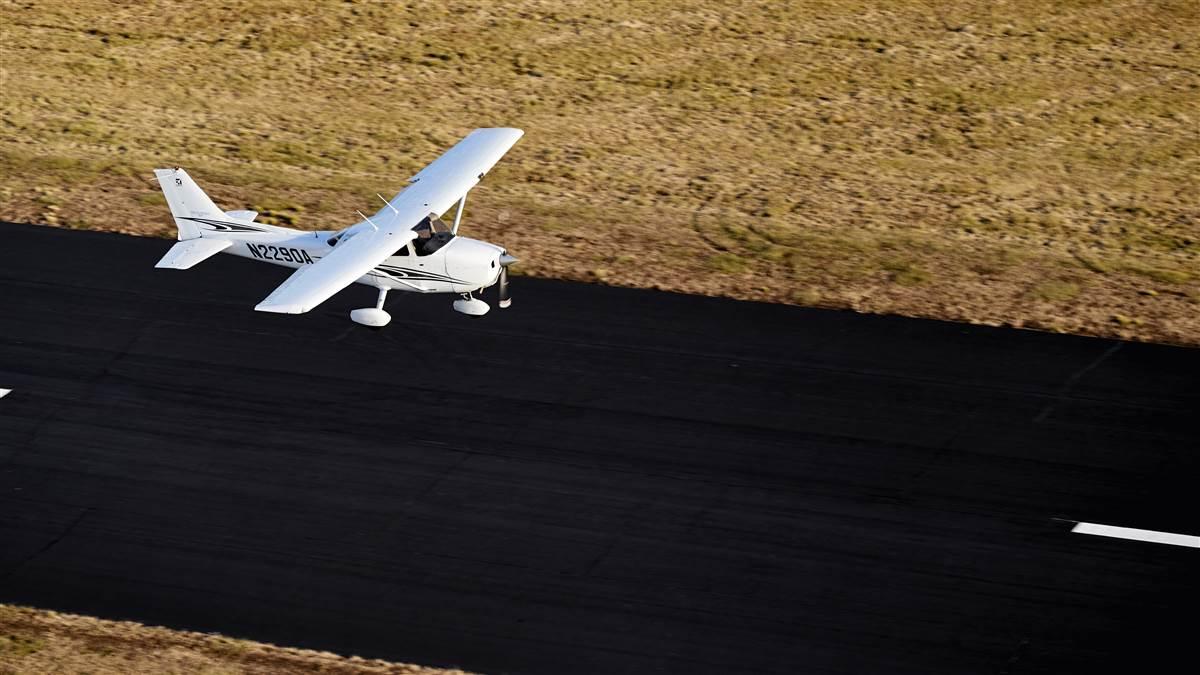 Choosing the right tool for the job

An ideal aircraft is one that takes us quickly and efficiently to our destination and doesn’t require a long runway to land. But aircraft design involves a sequence of compromises and results in a model that is optimized for a specific mission. In particular, a higher wing loading (weight/wing area) provides for a higher cruise speed but comes at the cost of a higher stall speed and greater landing distances (see “The Perfect Aircraft [for the Mission],” September 2019 AOPA Pilot).

This is where high-lift devices like flaps come in. Extending flaps can lower stall speed, increase wing area (and thereby decrease wing loading), and provide more lift at lower airspeeds. Flaps also increase approach angles, which can be both good and bad. For a field with obstructions near the approach end, an increased approach angle can help navigate over them.

But the drag that flaps provide curbs glide distance, and in an engine-out scenario their effects can be devastating. Slipping can provide a more flexible way to manage the approach path angle. —CC

Sometimes, though, I see a practice that isn’t necessarily wrong but just isn’t optimal. For example, a recent private candidate, Leo, was performing a sequence of traffic patterns to land at the airport and I suspected that either his landing checklist wasn’t well considered or that he had become a slave to it.

On each pattern, Leo performed the landing procedure exactly the same way. As he turned onto the final approach segment for our last landing, we saw the one white PAPI light turn red. He announced, “I’m too low,” and proceeded to add his final notch of flaps followed by even more power than usual to regain an appropriate approach path to the runway. Leo did guide the Cessna 172 to a nice landing on the runway, but I wondered why, on realizing that he was too low, he didn’t delay adding flaps until he had secured a better approach path. Checklists are important to ensure we have performed all the necessary tasks, but sometimes we should alter or even deviate from them when the situation dictates.

Interestingly, operating handbooks can give precious little guidance on configuring the aircraft for approach and landing. Many use phrases like “Use flaps as necessary” and other similar advice so it’s up to you to find the procedure that works best. For this reason, I like to construct my own checklist. It’s a great opportunity to go back to first principles and ensure I remember the effect of each item so that I am poised to modify my regimen when the need arises.

Of course we all strive for the gold standard—a stabilized approach—in finishing a flight. The Airplane Flying Handbook defines a stabilized approach as “one in which the pilot establishes and maintains a constant-angle glidepath towards a predetermined point on the landing runway.” But it can’t be as simple as this, as an airplane falling straight down satisfies that definition—yet that would hardly be considered successful.

A stabilized approach may be tough to define, but we observe one when the pilot guides the aircraft with a reasonable approach angle to the runway using measured control inputs so that a successful landing is never in doubt. Let’s dissect a final approach segment and see the possible factors that can provide such stability. We’ll assume that the pilot has selected an approach airspeed that offers a sufficient buffer over the stall speed but is not so high that it requires much runway to dissipate that airspeed on landing (see illustration on facing page). 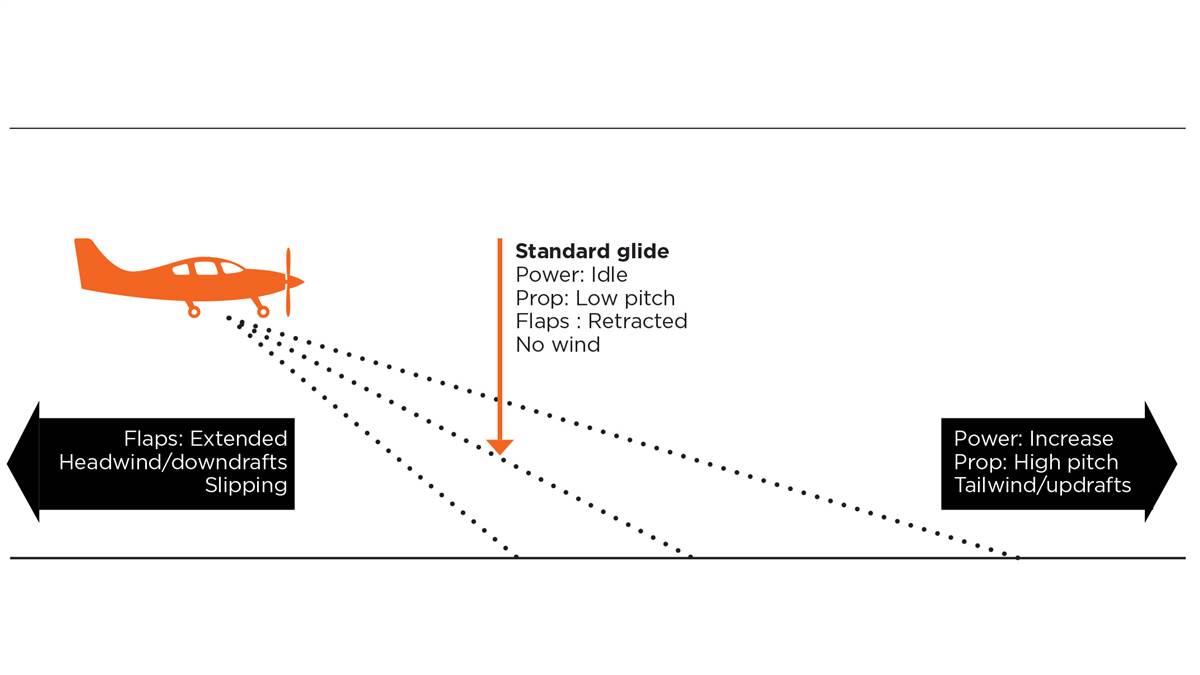 For glides with gear down, increasing power, placing the propeller in high pitch, tailwinds, and updrafts will extend the glide distance and decrease the glide angle. Extending the flaps, slipping, headwinds, and downdrafts have the opposite effect.

Could you make the runway?

I took my Cessna 152 up for some glides recently and calculated a glide ratio of approximately 11:1; that is, for every one foot of altitude loss, it traveled 11 feet forward. The corresponding glide angle is 5 degrees, much greater than that provided by most approach lighting systems. Keep in mind that this angle refers to a no-wind scenario. A 20-knot headwind on final changes the 152 approach angle to 7.5 degrees.

Interestingly, the glide ratio necessary for maintaining a 3-degree glide path is 19:1, a value that is consistent with some transport category aircraft like the Boeing 787 but far better than that of most general aviation aircraft. And even a Boeing 787 will not be able to achieve such a high glide ratio with gear down and flaps extended.

The moral of the story is that by maintaining a 3 degree approach path, upon engine failure, chances are you won’t make the runway. —CC

Approach path angle. Many PAPIs and VASIs provide a 3-degree approach path to a point along the runway, and keeping a balance of white and red lights can maintain this angle—along with obstacle clearance. The trouble is that, upon engine failure, most airplanes will land short of the runway (see “Gliding Flight,” p. 96). Maintaining such an approach path requires power, and that’s fine until the day that there isn’t any. On one approach to my home airport at which the runway is surrounded by tall trees, the only reason I was able to land on the runway following an engine failure on final was the relatively steep approach path I maintain when landing there.

Propeller configuration. For an adjustable-pitch propeller, low pitch (high rpm) provides significant drag, but it makes sense to maintain a low pitch in the pattern in case a go-around is necessary. In an emergent engine-failure situation, though, consider pulling the propeller back to a high pitch (low rpm) setting as a way to extend the glide.

Gear. While the drag penalty for lowered gear is significant, the gear should be in landing configuration no later than the downwind leg of the pattern unless an emergent situation indicates otherwise. Compensate for the increased approach angle with gear down by altering the pattern instead.

Pattern dimensions. With a strong tailwind on the downwind leg, it makes sense to turn onto the base leg of the pattern early. A headwind on landing is great for minimizing stopping distance but a headwind on final can significantly increase the approach angle. In my Cessna 152, a 20-knot headwind increases the glide angle from 5 degrees to 7.5 degrees, a 50-percent increase. Always remember where the wind is coming from and adjust the pattern accordingly.

Power. Approaching and landing with minimal power is a good habit. Relying on power to flatten an approach is not good preparation for the day it won’t be available. In fact, practicing power-off approaches regularly guarantees you will always be familiar with the glide characteristics of your own aircraft. An engine failure situation is the worst time to acquaint yourself with them.

Flaps. From my experience, many pilots extend flaps too early and pay the price with an attendant increase in drag. In an experiment with my airplane, adding full flaps (30 degrees) increased the no-wind glide angle by 50 percent, the same penalty that a 20-knot headwind exacted (see “Effects of Flaps,” this page). As a rule, I don’t land with full flaps so that I always have an easy way to add drag if I need to on short final.

Coordination. Slipping offers an efficient means of increasing the glide angle without gaining unwanted airspeed. With unsteady wind, a short slip can give a small adjustment to the approach path without destabilizing the approach, as adding and removing flaps would.

There are many ways to assemble an appropriate landing checklist, and consulting the advice from the operating handbook is a good start. For my own, I recall how the pros land when I step outside and watch birds on a beautiful day. During the approach, a bird keeps power strokes—the forward sweeping motion of the wings—to a minimum and her wings sleek until short final.

Just before the flare her wings increase in camber and angle of attack to effect a slow and gentle return to earth. She modifies her landing procedure when mother nature changes the conditions and her approaches are always stable. We can learn a lot from the pros.