Get the app Get the app
Already a member? Please login below for an enhanced experience. Not a member? Join today
News & Media VFR Unleashed: The great Florida escape

We talk a lot about personal minimums in general aviation. It is one of the fundamental safety principles in aeronautical decision making. When a go/no-go decision is sitting right on the bottom of your pre-defined minimums, the opportunity to fly may still exist, but it will certainly require some careful thinking. 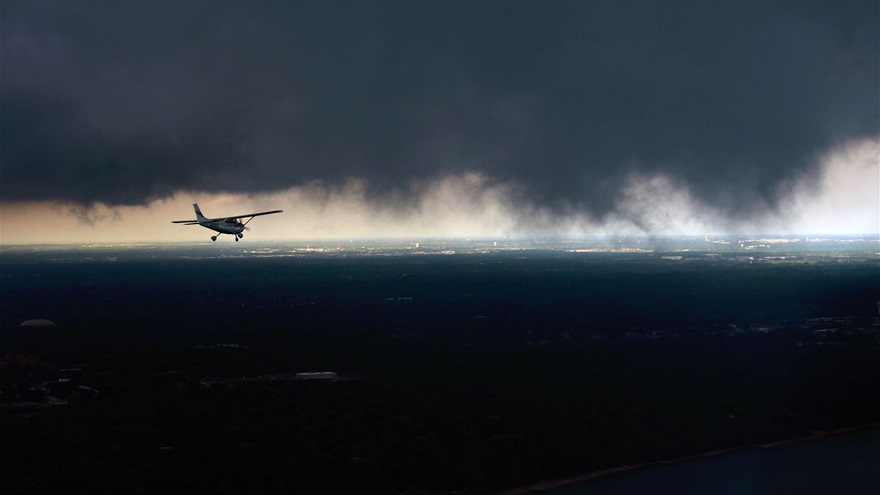 Low clouds should be cause for concern for VFR pilots. In most situations, Class G airspace allows VFR flights below 1,200 feet agl to be conducted simply clear of clouds, without having to maintain a 500-foot separation from the ceiling above as is required in most other types of airspace. But many other factors should be considered before embarking on a low-level VFR flight. Flat terrain, ample landing options, excellent visibility, and stable conditions are all criteria that may help minimize risks associated with a low-level flight. Photo by Chris Eads.

Such were the circumstances the day I made a run for it to escape the Florida peninsula. There was going to be only one short window to get north of Georgia over the next week or more. To take advantage of it safely, it would require establishing a strict commitment to minimums that I would not cross.

Several of our previous installments of VFR Unleashed have discussed the matter of making decisions surrounding marginal weather, and of being trapped by weather on long VFR cross-country trips. One of the most important skills to possess is the ability to recognize the difference between a positive opportunity to fly under marginal VFR conditions and a risk that is simply too unwise to take.

Stormy weather had already pinned me down for a couple of days as I waited for my opportunity to get home to Maryland after the annual Sun ‘n Fun fly-in in Lakeland, Florida. My responsibilities at the show prevented me from leaving early as most other VFR pilots did to get ahead of two back-to-back storm systems that promised to linger over the region for quite some time. Once the weather had its grip on the area, I settled in for a few days of visiting family near Tampa. 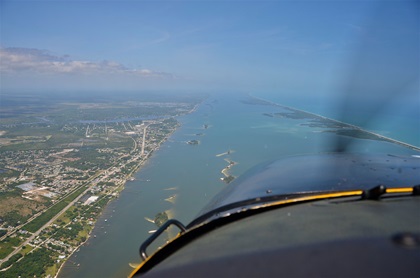 But on the third morning, as I looked at the current conditions and the forecast, I saw a narrow opportunity. The first storm system had passed during the night. In its wake were remarkably excellent visibility and a stiff breeze. A second line of storms followed that would stretch from Texas to South Carolina once they arrived later that evening.

For the next several hours, I would have more than 20 miles of visibility in crisp, cool air all the way to the Carolinas—plenty of time to make it north of the weather threat. It would be bumpy but doable with winds gusting around 18 knots. The real challenge was the ceilings. The entire route of flight had a layer of broken clouds sitting right at 1,200 to 1,500 feet agl. It was a narrow needle to thread for sure.

Ceilings below 1,000 feet agl render any controlled airspace IFR without a special VFR clearance from air traffic control. But as long as it’s not near an airfield where the overlying Class E airspace is established at 700 feet agl, the first 1,200 feet of airspace is Class G, which requires us to only remain clear of clouds with 1 mile of visibility during the daytime.

Personal minimums are limits we set at a predetermined set of flight conditions that we commit never to violate even if they are more conservative than the legal minimums. Having a threshold of visibility and ceilings—among other items—that we have committed as our go/no-go criteria will provide us a simple, binary choice when considering the potential of a flight. If I have a longstanding commitment never to fly without at least 1,500-foot ceilings, for example, then it makes the tough decision of go/no-go under marginal circumstances rather simple. Clouds are at 1,400 feet? Nope. Won’t fly. 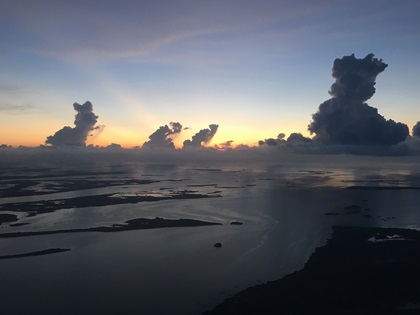 In my case, I had long considered ceilings at 1,500 feet the bottom of my personal minimums when visibility or terrain was an issue at all. But the situation that morning in Florida had a few unique characteristics that led me to consider whether I could carefully establish an appropriate set of minimums specific to this flight.

As I looked at the sectional chart and considered the route, I had three distinctly favorable circumstances around which I could establish a strategy for a low-level VFR flight to escape the weather. The first was a very stable forecast. This was not a case of fluctuating and rapidly evolving weather. The nature of it being high pressure—albeit short-lived before the next storm system arrived—meant that the forecast of excellent visibility and a clean layer of clouds was relatively trustworthy.

The second was the perfectly flat terrain. There were no natural obstacles to consider whatsoever; only constructed obstacles such as radio towers needed to be identified and avoided. Careful awareness of the maximum elevation figure for each quadrant and knowledge of all charted obstacles would be essential. Emergency landing options were also abundant as I would fly over miles and miles of open farmland and country roads.

The third dynamic would be the key to success. Florida is teeming with airports. I identified a route that would keep me entirely in Class G airspace, but also always within 10 miles of an airport where I could immediately stop short if the ceilings or visibility deteriorated. Some airports along the route were close to 20 miles apart, but if I considered the airport behind me as important a safety net as the airport in front of me, this meant that I could always be within immediate visual range of an airfield. It also meant that I would always be near an AWOS or ASOS to provide real-time insight into the ceilings in my immediate vicinity.

That key component became the backbone of my plan. I established a firm criterion that I must be able to maintain an altitude clear of clouds at 1,100 msl (which in most of Florida, is pretty close to the same altitude above the ground). That left 100 feet between me and the top of the Class G for handling the expected turbulence in breezy conditions. I must also be able to maintain direct visual contact with an airport where I could land if I could not maintain that altitude. While I might not be able to spot the actual runway at 10 miles out, I had to be able to visually identify where it should be and have my GPS ready to lead me there. I would hop from airfield to airfield all the way to Georgia.

Some might consider this a case of cheating on my long-established minimum of 1,500-foot ceilings. But when considered against the other factors of a stable forecast, excellent visibility, flat terrain, and ample airports to divert to, I made the decision to establish a specific set of minimum criteria applicable to those unique circumstances.

It worked. At one point nearing the Georgia state line, the visibility had dropped to about 8 or 10 miles. I considered that a violation of the 20-mile visibility minimum I had set for this flight, so I landed immediately. I waited an hour; the visibility improved as temperatures warmed, and the ceilings also lifted. I then continued and made it home in time for dinner.

AOPA Senior Director, Outreach and Events
Chris began working for AOPA in 2013, but has been a private pilot and AOPA member since 2001. He flies VFR all over the country both for fun and as a part of his role leading AOPA events and regional fly-ins.
Go to Chris Eads's Profile
Topics: Training and Safety, Aeronautical Decision Making, Weather