Get the app Get the app
Get the latest news on coronavirus impacts on general aviation, including what AOPA is doing to protect GA, event cancellations, advice for pilots to protect themselves, and more. Read More
Already a member? Please login below for an enhanced experience. Not a member? Join today
News & Videos Aircraft Maintenance: Outs and ins of fuel bladder replacement

The other day, I opened the hangar door to an unwelcome sight. As soon as the sunlight spilled into the hangar, my eyes were immediately drawn to a distinctive blue stain on the concrete floor below the wing that could only mean one thing: fuel leak. 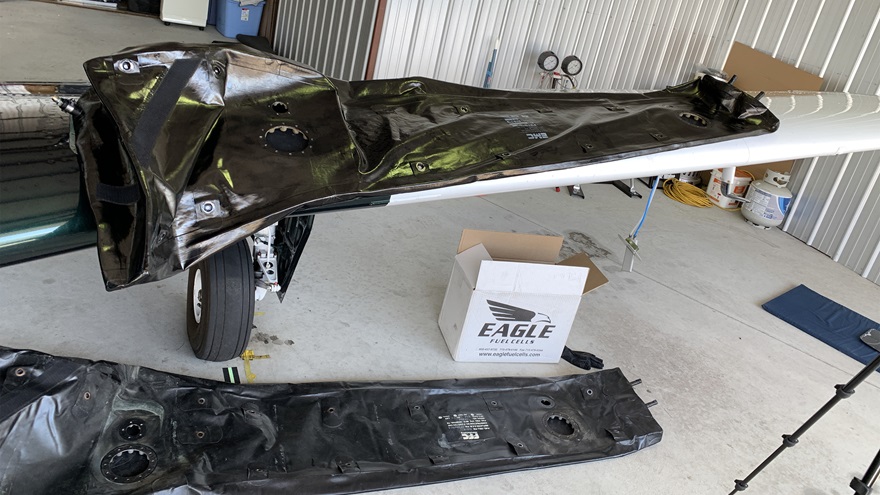 The new fuel cell from Eagle is on top of the wing with the old cell on the floor for reference. Photo courtesy of Jeff Simon.

Aircraft designers typically implement one of three methods to store fuel: aluminum tanks, wet wings, or flexible bladders. Aluminum tanks are simple and extremely reliable, but they are usually restricted to simple shapes that don’t maximize fuel space. Wet wing designs are the most efficient at storing the most fuel with the smallest amount of structural weight, but as many Grumman and Mooney owners can attest to, these designs are prone to leaks and can be painstakingly difficult to repair. Flexible bladders (or fuel cells by their proper name) are an excellent compromise of weight, fuel volume, and maintenance support.

SocialFlight’s A36 Bonanza has a 40-gallon fuel cell in the leading edge of each wing. After getting several recommendations for Eagle Fuel Cells in Eagle River, Wisconsin, I decided to make the company my first call. The gentleman who answered the phone knew where the conversation was going before I could even get the details out. “Let me guess…left tank? We’re running one to two weeks out on those because they’re always the first to go. But, let me see what I can do.” I just stood there on hold, mouth open, wondering how he already knew exactly what was wrong with my airplane. It didn’t take long before a new fuel cell was on its way to me.

I followed up with a call to the president of Eagle Fuel Cells, Kurt Hartwig, to get some tips on installation and learn more about the company and how the staff member knew exactly what I needed as soon as he answered the phone. Hartwig is a second-generation fuel cell guru, taking over the company from his parents, Carl and Nancy Hartwig, who founded the company in 1962. He gave me a lesson in the history of fuel cells, their construction, and how they have evolved over time—about 100 times more information that I can convey in this brief article. The bottom line is that fuel cell technology has been evolving since the design was originally introduced back in the 1940s. Unfortunately, much of that evolution has been in a race to adapt to the increasing aromatic content in aviation fuels that causes deterioration of the rubber compounds from which the cells are constructed. The compounds used in Eagle’s cells are relatively new technology with advanced compounds specifically designed for the chemical makeup of today’s 100LL and other fuels. Regardless, staying wet with fuel remains the best defense against deterioration, which is why the left tank is almost always the first to go. After all, we pilots usually burn from the left tank first to balance the fuel load in the wings against the pilot in the left seat. And so, it’s the left tank that spends the most time sitting below full and exposed to fuel vapors instead of liquid fuel. 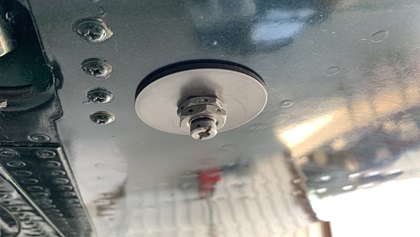 Following Hartwig’s detailed advice (and the maintenance manual), I removed the old tank through the smaller-than-they-really-should-be access covers in the top of the wing. The date on the old tank indicated that it was 22 years old, so it owed me nothing. I thanked it for its service and laid it on the shop floor for reference during the installation of the new tank. The first step was to clean out any residual fuel goo from the wing and ensure that all rivet heads, seams, and sharp edges were covered in duct tape (included in the kit). Eagle also includes bandages with the company’s logo as either a courtesy or cruel joke. I’ve heard horror stories about needing them, but I didn’t have to crack any of them open during my installation. Hartwig recommended coating the entire wing cavity in ACF-50 anti-corrosion spray, mainly as a lubricant to aid in installation. ACF-50 is compatible with the rubber of the cell and has the added benefit of preventing corrosion on the structure of the wing at the same time. The new fuel cell was surprisingly flexible and went into the wing without a hitch.

Once inside the wing, the tank is mounted using a series of metal clips that hold straps on the top surface of the tank to the top of the cavity in the wing. These clips can be challenging to get attached and require a remarkable combination of dexterity and brute strength. In the Bonanza, there are two clips that are located just out of reach for the average human. Apparently, the engineer who designed the wing cavity didn’t like mechanics and this was his way of getting even for decades to come.

After my son Ben and I failed repeatedly to get the snaps in place, I invited over an entire class of A&P students from the National Aviation Academy’s New England campus (located at my airport in Stow, Massachusetts) to see if any of them could make it work. One by one, they tried their luck. However, it wasn’t until their instructor, Bill Cardoza, gave it a shot that we finally heard the satisfying “click” of success. Days later he still had the bruises on his arm from the experience, so his students got a real-world lesson on what aircraft maintenance can sometimes entail.

With the snaps in place, the fuel senders, access panels, and fuel cap ring were installed and the tank was ready to be filled and tested. Ready, that is, until I discovered two more snaps sitting on my work cart that hadn’t been installed. In the stress and excitement of focusing on the two most challenging snaps, I’d broken my golden rule of checking everything twice. And so, back into the wing one more time to get the neglected snaps installed, close everything up, and get ready for fuel.

The last step was to install Eagle’s STCed flush fuel drains. The original fuel drains are mounted only to the fuel drain nipple at the bottom of the tank with no other support. Every time you sample the fuel you are twisting and pushing against the bladder, inviting future trouble. Eagle’s new drains are mounted against a retaining ring that sits flush with the bottom of the wing. It’s a clean look that serves to protect the tank from wear and make fuel sampling a simple affair. An added benefit is that the drains are designed to be disassembled and maintained from the bottom so you can easily replace o-rings while leaving the drain in place on the tank.

With everything buttoned up and leak-free, our airplane is back in the air with the fuel safely inside the wing, rather than on the hangar floor. If you’ve been procrastinating about dealing with those blue stains on your aircraft, I would encourage you to bite the bullet and make the change. With a little luck, it’ll be a once-every-22-years job like mine was. Until next time, I hope you and your families remain safe and healthy and wish you blue skies.