Or, how I learned to stop worrying and love the slip

Turning onto the base leg of the traffic pattern, I knew I was coming in high. I needed to lose altitude quickly, or the aerodynamically slippery Van’s RV–12 would sail past my aiming point for this spot landing practice. I needed drag, and extending the flaperons would not be enough. 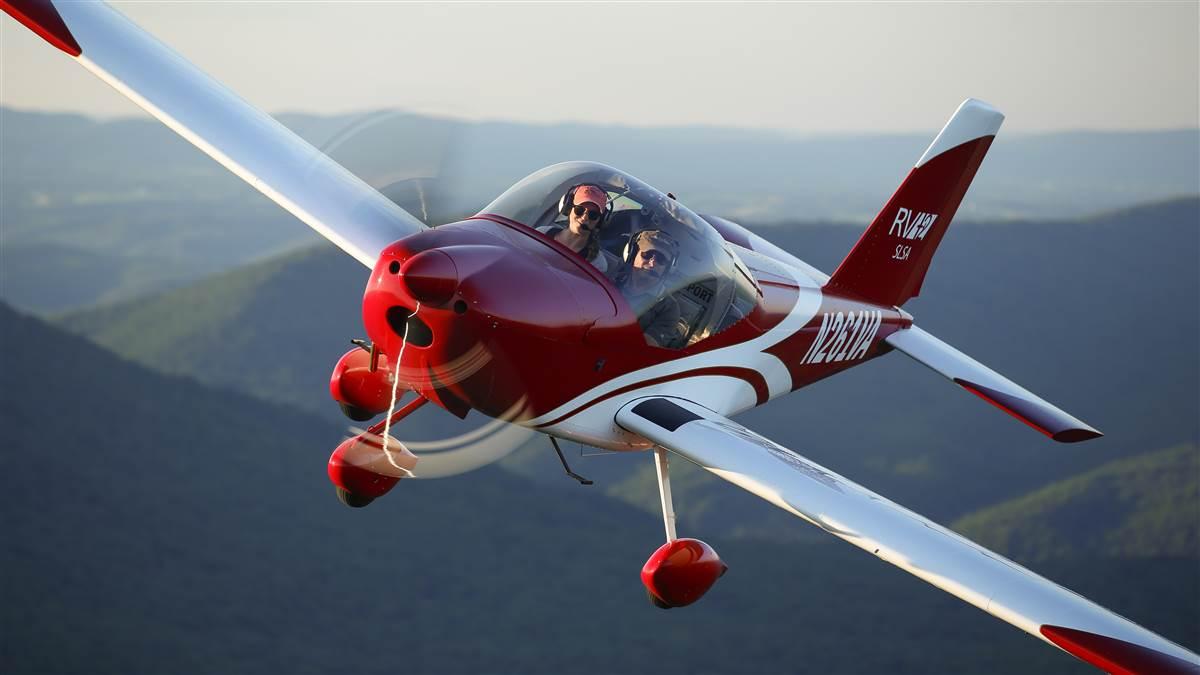 "Slip," my instructor commanded. Banked toward the runway, I held moderate pressure on the top rudder pedal and the descent angle increased—but not enough.

“More rudder,” he coached. I uneasily extended my toes farther. “More rudder.” Soon, I felt his foot heavy on the rudder pedal as it sank to the floor. The airplane was back on glidepath by the time we turned onto final approach.

Most student pilots first encounter aerodynamic slips unintentionally while practicing turns: Rolling into the turn with ailerons, the student forgets to correct for adverse yaw with rudder pressure, and the airplane’s nose lags behind the turn. With practice, students begin to recognize the sensations of uncoordinated flight—being pulled to the inside of a slipping turn or the outside of a skidding one, for instance—and instinctively “step on the ball” to correct with rudder. They learn of the drag penalties of sloppy footwork, and that at its worst, uncoordinated flight can lead to the dreaded skidding base-to-final stall-spin accident.

When ailerons and rudder work together, airplanes perform at their best. Passengers are comfortable, and instructors give approving nods. By deliberately cross-controlling in a slip, we turn those norms on their head—we’re essentially flying sideways, with the broad side of the airplane facing the relative wind. So what good are these draggy, uncomfortable, inefficient maneuvers? And how do we perform them safely? 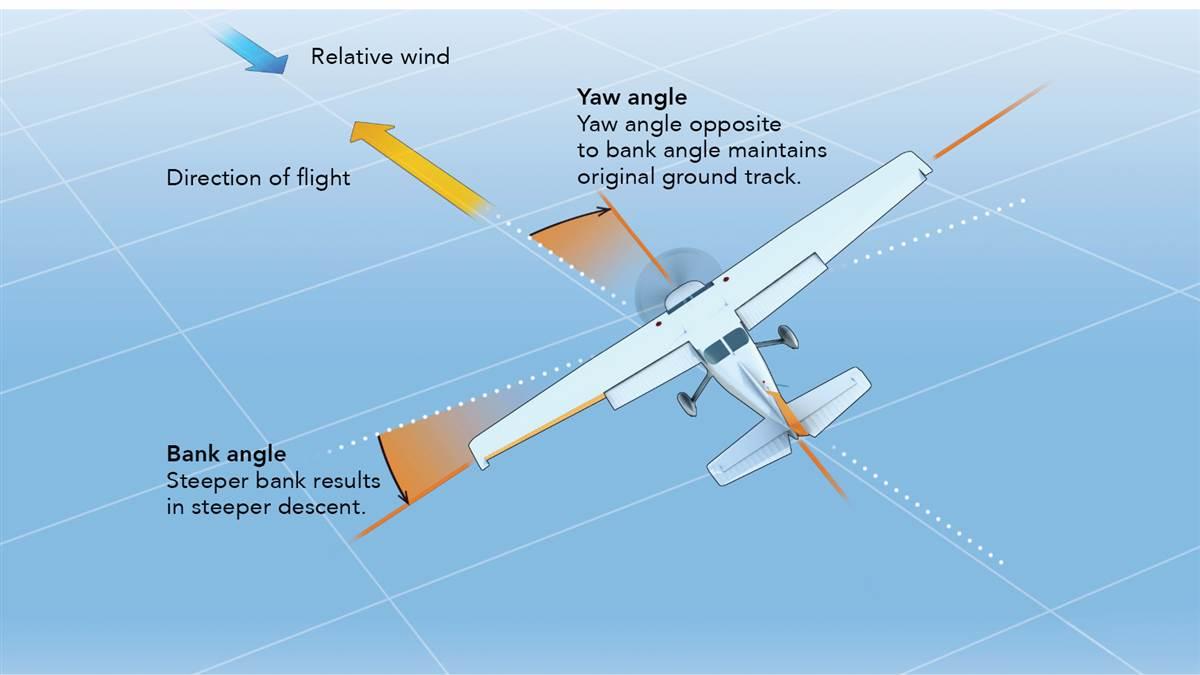 Forward Slip
Forward slips increase the angle of descent by increasing drag on the airplane. The pilot applies rudder in one direction and uses opposite aileron to maintain the original ground track.
Illustration by Charles Floyd 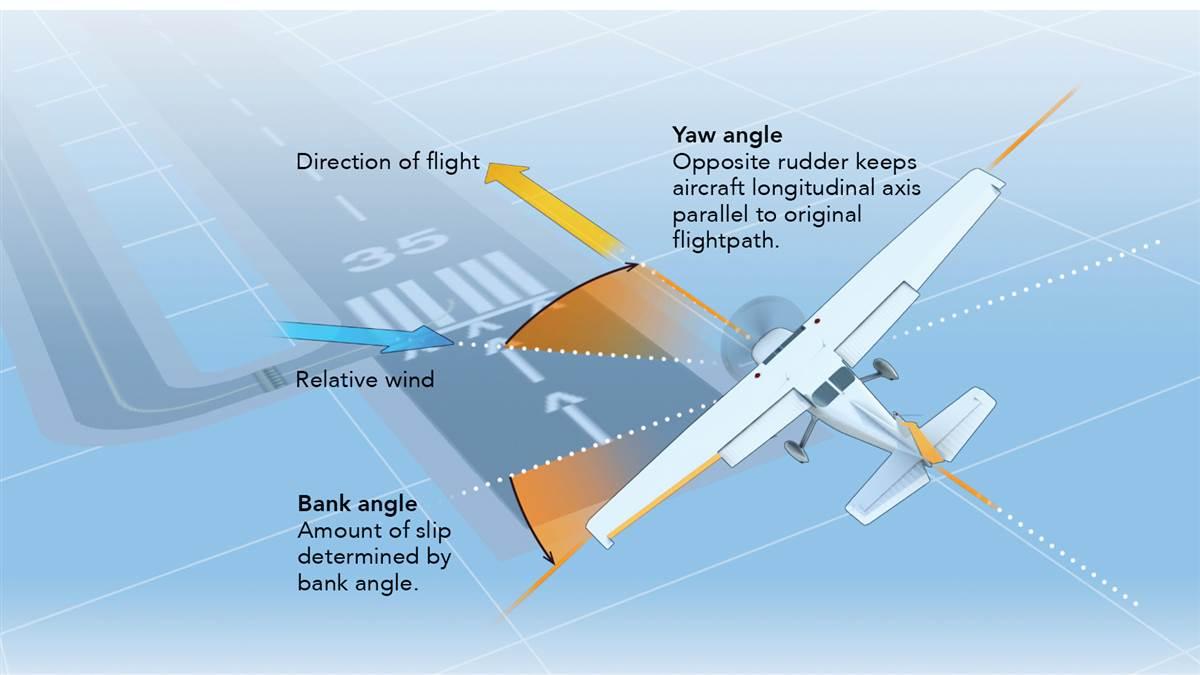 SideSlip
Like a forward slip, a sideslip uses bank and opposite rudder. This technique is useful in a crosswind to keep the nose aligned with the runway while landing.
Illustration by Charles Floyd

All aircraft are not equal when it comes to slips

Before you venture out to conquer slips, review your pilot’s operating handbook with your instructor to understand any special considerations related to the model of airplane you’re flying. 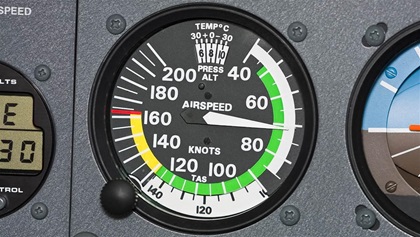 Airspeed
The airspeed indicator displays the difference between the total pressure sensed through the pitot tube and static pressure sensed through the static port. In a slip, air is no longer flowing uniformly along the sides of the airplane, it’s coming from an angle. If the airplane you’re flying has a single static port on the right side and you enter a right-wing-low forward slip, for instance, air hitting the broad side of the airplane is forced into the static port. That higher static pressure reading may result in an artificially low indicated airspeed. In a left-wing-low forward slip, the reverse will be true. 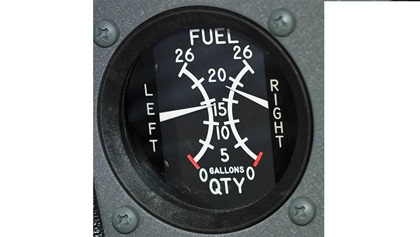 Fuel level
Be cautious about performing slips with low fuel. In aircraft with wing tanks where the lower wing is selected, the fuel may slosh away from the fuel lines leading to the engine and cut off the engine’s fuel supply at a critical time. 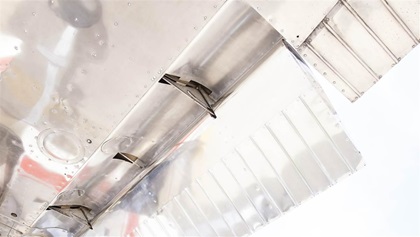 Flaps
Check your pilot’s operating handbook for any limitations on slipping with full or partial flaps. In some aircraft, extended flaps may interfere with the airflow over the elevator. For instance, the Cessna 172S POH warns, “Steep slips should be avoided with flap settings greater than 20 degrees due to a slight tendency for the elevator to oscillate under certain combinations of airspeed, sideslip angle, and center of gravity loadings.” —SD

Roll left, yaw right. Adverse yaw is the tendency of an airplane to yaw in the opposite direction of a turn. Rolling into a turn with ailerons, the downward-deflected aileron on the raised wing produces more lift—and hence drag—than the upward-deflected aileron on the inside of the turn. That wing slows and yaws the airplane toward the outside of the turn.

There are two main types of slips: forward slips and sideslips. Sideslips are used primarily for crosswind landings. To keep the crosswind from blowing the airplane away from the runway centerline, the pilot banks into the wind. But the pilot doesn’t actually want to turn, and the airplane should touch down with the nose straight down the runway. So, the pilot uses opposite rudder to align the nose with the runway centerline, touching down with the upwind wing low.

Forward slips are the same aerodynamically, but their purpose is different. While sideslips capitalize on the difference between the direction the airplane is going (with respect to the relative wind) and the direction it’s facing to maintain a desired orientation and ground track, forward slips are all about drag. Forward slips can increase your descent rate without increasing airspeed in emergency descents, forced landings, or to clear obstacles in a confined landing area. For airplanes with no flaps, a forward slip is the only method for steepening the glide path on final approach. If you envision yourself on backcountry excursions in a Cessna 120, slips are an indispensable skill.

Depending on conditions, a slip could require full rudder deflection—and maneuvering close to the ground carries added risk that shouldn’t be discounted. If stomping on the rudder pedal in the traffic pattern makes you uneasy, there’s good reason. But consider that you may not be afraid of slips so much as doing them wrong. And that’s something a little practice can fix.

Up in the air

In The Flight Instructor’s Manual, William K. Kershner recommends practicing forward slips at altitude to help students become comfortable with safely cross-controlling the airplane: Choose a reference such as a straight road or railroad tracks and practice descending in the slip with partial power to decrease altitude loss and give yourself more time to practice; once you’re comfortable with the slip, you’ll progress to power-off descents as you would in a normal slip to landing.

Flying sideways can be unsettling, and Kershner acknowledges that it may take time to adjust to the forces and psychological factors acting on a pilot in a steep, slipping descent. “Some people are quite uncomfortable at first and try to lean well to the high side of the airplane,” he explains.

In a side-by-side trainer, it will be easiest to slip to the left so you can better see the course ahead of you, but consider the wind direction while practicing. In a descent to landing, you’ll want to slip into the wind so you can transition to a sideslip for touchdown. Also be sure to recover from the forward slip in plenty of time to turn your focus to the landing.

As noted in the Airplane Flying Handbook, a steeper bank will produce a steeper descent, but you reach the practical slip limit when the bank you’ve chosen requires full rudder deflection. If you need to descend more rapidly, lowering the nose will increase airspeed and hence rudder effectiveness, allowing you to slip more steeply. But for forward slips to a landing, extra airspeed could be counterproductive. You may lose excess altitude, but if you come out of the slip with excess airspeed for landing, you’ve only traded one problem for another. (Carrying power into a slip also can increase your airspeed and keep the aircraft from descending as steeply.) Slips can help, but they’re no substitute for a go-around.

Another common mistake is allowing the nose to drift too high. At slower airspeeds, the rudder becomes less effective and the increase in angle of attack may put the airplane close to a stall. Kershner notes that students sometimes feel uncomfortable with the slipping bank and unconsciously allow the wings to drift back toward level, often with the nose high. Students may also unintentionally begin a turning slip because they relax rudder pressure or allow the airplane to get too slow, causing the rudder to lose effectiveness.

Like many pilots, I flew for years without using more than light to moderate forward slips. With long, unobstructed runways and flap-equipped airplanes, I didn’t really need to. But when I began commercial pilot training in the RV–12, just a little slip wouldn’t do. With a glide ratio of 13:1, the RV–12 wants to keep flying, even with full flaps deployed—and the Commercial Pilot Airman Certification Standards give a 100-foot touchdown window for short-field landings. I had to face the slip head on (or should I say, sideways).

We slipped at altitude. We slipped on downwind. We slipped turning downwind to base, we slipped on final approach. I studied the pilot’s operating handbook to understand how the maneuver affected the model I was flying (see “Know Your Airplane,” sidebar). Somewhere along the way, slips became routine, and even fun. A little discomfort with uncoordinated flight gives way to satisfaction when the tires hit the pavement just where you want them to.

Earning a commercial certificate in an LSA

Commercial training in a Van’s RV–12? A few years ago, the concept would have been absurd: The commercial pilot certificate was inseparable from training in a complex, or less commonly, turbine-powered airplane. The RV–12 is a light sport aircraft, a category of small, mechanically simple aircraft designed to be simple to fly. That’s a far cry from a complex airplane, defined as having flaps, a controllable-pitch propeller, and retractable landing gear.

Now the aeronautical experience requirements include 10 hours of training in a complex airplane, a turbine-powered airplane, or a technically advanced airplane. The batch of changes to training regulations that went into effect in 2018 defines a TAA as having an electronically advanced avionics system that includes an electronic primary flight display, multifunction display, and two-axis autopilot integrated with the navigation system.

With low fuel burn and low operating costs, the RV–12 rented for a fraction of the price of complex aircraft in the area, many of which were older models. For that price I got modern avionics and sporty handling in an airplane that seems like it was built for the commercial training maneuvers. —SD