Get the app Get the app
AOPA Members DO more LEARN more SAVE more - Get MORE out of being a pilot - CLICK HERE
News & Media Events: Back in the game

Personal perspective on a new kind of space race

Bright as a welder’s torch, the SpaceX Falcon 9 rocket ascended from famed Launch Complex 39A carrying two NASA astronauts on what was essentially a charter flight to the International Space Station. 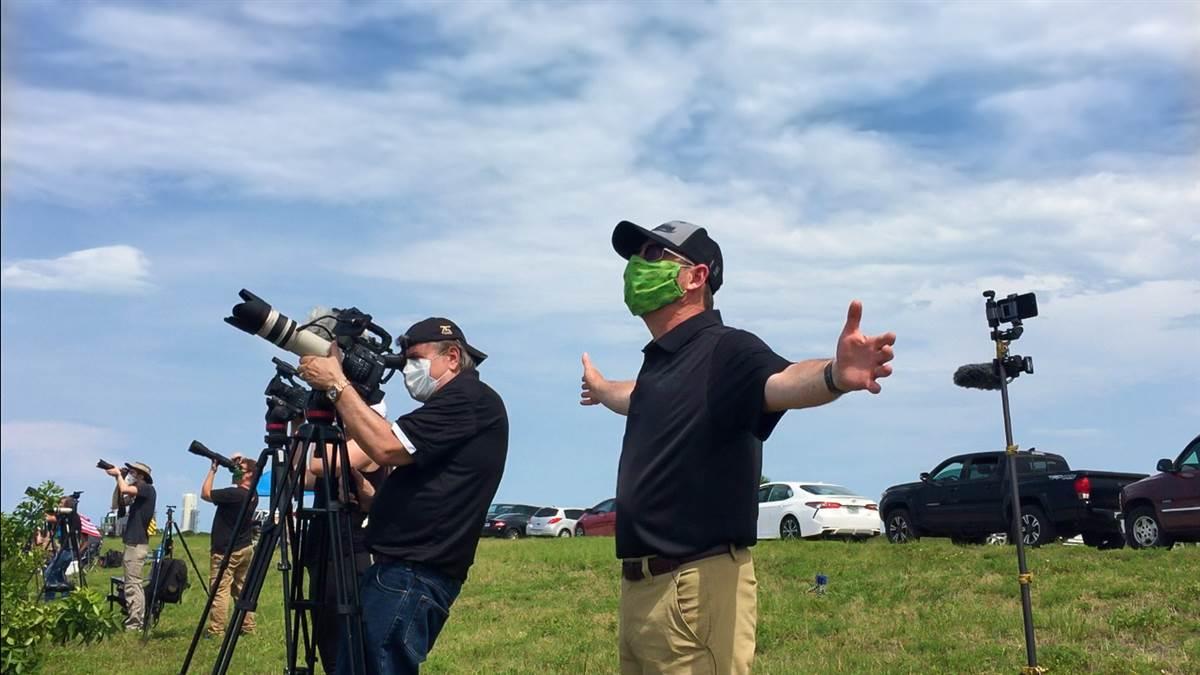 There are many public viewing areas around the Kennedy Space Center where you can see a launch. Go early and be prepared for heavy traffic. Hundreds of thousands show up for many launches. NASA also sells guaranteed seats at the KSC Visitor Complex. Learn about that and launch schedules on the NASA website.

Gone are the orange “pumpkin” suits and the crinkly white bags of past space missions. SpaceX founder Elon Musk wanted his astronauts to look better, so he had Hollywood costume designer Jose Fernandez (Batman v. Superman, Fantastic Four, X-2: X-Men United) design what is now being called “the Musk suit.” If it looks a little like a tuxedo, the sleek, form-fitting, black and white one-piece is supposed to. No wires and hoses are obvious because they connect discreetly to the capsule seats, which contain many of the supporting systems. Doug Hurley pronounced the suit “very comfortable.” I think you’ve found your Halloween costume, Mr. Haines. —JSW

All done in silence—or so it seemed for about 20 seconds. And then the wave of noise rushed over our viewing site about 5 miles away across the water—a rumble at first and then a deep growl that rattled our chests and then a roar that pushed us backward, sounding as if it were ripping open the atmosphere to let the Dragon capsule out into space. And, in a sense, it was, shoving the little capsule into an orbit that would allow it to catch up with the ISS some 19 hours later for a successful docking.

The May 30 launch of the NASA SpaceX Crew Dragon Demo-2 mission was the first launch of Americans from American soil since the space shuttle was retired in 2011. In the interim, NASA chartered flights on Russian Soyuz rockets while the agency transitioned to what is known as the Commercial Crew program, allowing private companies to carry American astronauts to the space station under contract to the government.

But this flight was historic to me on an entirely personal level in that I had never attended a launch in person. I credit the Apollo program in the 1960s and 1970s as being influential in my pursuit of a career in aviation. I was fascinated by astronauts and the technology to get them to the moon and back. I was a mesmerized 8-year-old when, on July 16, 1969, Apollo 11’s Saturn V rocket lifted off from that same Launch Pad 39A for its historic mission to the moon. A few evenings later I sat cross-legged on the floor in our family room watching on our black-and-white television as Neil Armstrong stepped onto the lunar surface.

Nearly 51 years later I stood in awe, arms spread out as the sound waves washed over me, the SpaceX Falcon 9 ripping itself from Earth’s gravity on a mission to show that the United States is still capable of great things—still capable of delivering on promises and still capable of dreaming big.

I wanted to be there. I wanted to be in Dragon capsule Endeavour with astronauts Douglas Hurley and Robert Behnken, to feel the G loads, to look out those side windows and see the Earth falling away as the darkness of space encroached.

But, alas, they didn’t ask. I would have to be satisfied with seeing, hearing, and feeling the launch from across the water at the Cape Canaveral Air Force Station.

Minutes after the ascent, several of us from the media group were rushed off to the Vehicle Assembly Building at the Kennedy Space Center to hear NASA Administrator Jim Bridenstine, Vice President Mike Pence, and President Donald Trump address NASA employees and visitors. They all praised the work of NASA and SpaceX, heaping praise on Musk. And Musk could hardly contain himself, jumping from his chair—literally—and waving his arms in the air, and jumping up and down again and again, earning him the biggest applause of the day.

And while it was fun to see and hear the dignitaries in that mammoth and historic building, my mind kept drifting back to that rush of the launch, the sense of awe that humans could actually leave this blue marble, observe it from afar, and return again.

But we’re not done yet. Bridenstine, Pence, and Trump all reiterated that the next goal is to return Americans to the lunar surface in 2024 as part of the Artemis Program, establishing a permanent human presence there within the next decade. And that presence is simply a steppingstone to the next big leap—carrying people to Mars.

Perhaps on May 30, 2020, there was a kid sitting cross-legged somewhere watching this launch who someday will be hurtling back toward Earth after a successful trip to Mars. Dream big. That’s what we do in this country.