Get the app Get the app
Already a member? Please login below for an enhanced experience. Not a member? Join today
News & Media eVTOL evolution

New activity in a maturing field

The electric vertical takeoff and landing (eVTOL) phenomenon began to capture public attention after 2008 or so, when the first photos and videos began trickling out over the internet and YouTube. 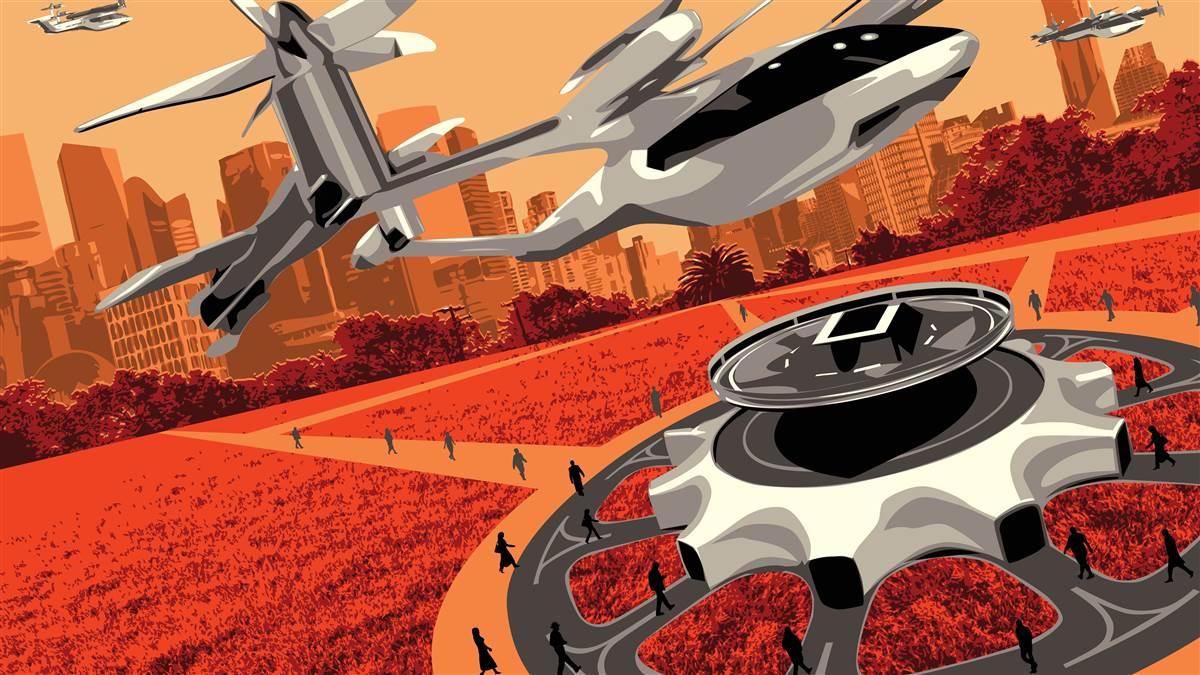 These spidery-looking multirotor designs received a huge amount of publicity, perhaps because they invoked the idea of a passenger-carrying drone. In a large sense, drones paved the way for eVTOLs.

But where drones have found their way into increasingly legitimized, utilitarian roles, eVTOLs have not—at least not yet. Remotely piloted and especially well-suited for various surveillance, investigatory, and delivery roles, drones are establishing themselves in the greater aviation world. There are regulations for certifying drone pilots, operating them—or not—in certain airspace, registering them, and observing various limitations.

The number of aspiring eVTOL manufacturers, and the variety of their offerings, seems to know no end. They range from single-seat hoverboards to six-seat air taxis, and have propulsion schemes anywhere from multirotor to tiltrotor configurations; there are designs with and without conventional wings. TransportUp (transportup.com), a website devoted to eVTOLs, may be the go-to source for keeping track of this segment’s burgeoning growth. Another is the Vertical Flight Society’s Electric VTOL News (evtol.news).

After 10 or so years in gestation, reports indicate that eVTOL designs continue to make progress, although much of it appears sparsely documented. Not that there hasn’t been news. Ride-sharing giant Uber provided much of the impetus for eVTOLs when it developed Uber Elevate—a concept for an intraurban air taxi service using “vertiports” located on rooftops. If eVTOLs began as oddities or playthings for the wealthy, they certainly gained a strong element of legitimacy from Uber’s basing an entire new class of service on its promise of an eco-friendly alternative to fossil-fueled, ground-bound travel.

Uber has said that the FAA noted that piloted, certificated eVTOL aircraft can operate safely in the national airspace system without the need for changes to the system today, and the company will be working with its vehicle partners and the FAA on pilot certification and training requirements. Pilot training standards are being worked out between the manufacturers, the FAA, and industry groups, Uber said, mentioning that the General Aviation Manufacturers Association’s Flight Licensing and Certification Ad-Hoc Committee had published a report on eVTOL and simplified vehicle operations.

In response to an inquiry, Uber stated that its eVTOLs will operate under FAR Part 135 rules, following the existing regulatory framework. It says it is pleased to see the level of engagement from certification agencies like the FAA and European Union Aviation Safety Agency, and added that Uber and its partners are working with the Department of Transportation’s Volpe Center and NASA on noise metrics and approach modeling. Through the NASA Aeronautics Research Institute’s Advanced Air Mobility ecosystem working groups, the company says it’s also engaged with government, industry, academic, and community stakeholders to advance urban air mobility (UAM) research and development activities.

All of this sounds very impressive. We shall see how it all unfolds. Coming up with new certification, airspace, and operating rules for an entirely new concept of piloted, multirotor aircraft operating at low altitude and in densely populated, obstacle-laden airspace is no small matter. Not to mention unmanned flight—which is the ultimate goal. Rulemaking is traditionally a time-consuming process, and bureaucracies can be ponderous.

Uber has said that it plans to use a fleet of aircraft that is all electric, meaning that electric motors will power these aircrafts’ rotors. There’s no specific mention of power sources to drive these motors, but the current assumption is that lithium-ion batteries will be used. Lithium-ion technology has its advantages, but its drawbacks in aviation applications are causing new research into alternatives. Lithium-ion batteries’ relatively low energy densities—energy per unit of weight, expressed as Watt-hours per kilogram (Wh/kg)—mean that their endurance is limited.

This is especially critical in eVTOL applications because rotorcraft consume a lot of power in vertical flight. Some designs post flight ranges as short as 50 nautical miles, and endurances as low as 30 minutes. Lithium-ion batteries have long charge times, and can also generate so much heat that cooling systems are necessary. Thermal runaways are possible, so battery management systems are necessary. Protective cases and insulated battery cells are needed to guard against damage in case of a crash or improper handling or storage. And if exposed to air, lithium-ion batteries can catch fire. Thermal runaways and fires involving lithium-ion batteries in Boeing 787 airliners caused them to be grounded until a redesign was made.

Bell’s Nexus offers a hybrid power arrangement to boost power and range. This involves using an internal combustion engine as well as batteries. Power can be used to drive its rotors as well as charge its batteries, or the pilot can use electric power for takeoff and landings, then switch to engine power in cruise—to recharge the batteries. A similar arrangement is used in Pipistrel’s Panthera low-wing single.

Bye Aerospace is testing lithium-sulfur batteries for use in its eFlyer series of low-wing, electrically powered singles. “Lithium-sulfur batteries have twice the energy density of lithium ion batteries, cost less, weigh half as much, and are more thermally robust,” says CEO George Bye. “Our current eFlyer 2 has a 250 to 270 Watt-hour per kilogram energy density, but the lithium sulfur batteries we’re researching have twice that density, meaning takeoffs with lower states of charge, and twice the potential endurance and speed.” At this writing, Bye had yet to begin flight tests with the new batteries.

Hydrogen cells are also being explored as eVTOL power sources. One manufacturer, Alaka’i Technology, has advanced a six-rotor, four-passenger design with an advertised speed and range of 118 mph and 400 nm. Dubbed the Skai, the craft will be powered by six 100-kilowatt motors (equaling a total of about 800 horsepower) and have a 1,000-pound payload.

In a major development, Pipistrel announced in November 2019 that it was dialing down its pace on its Uber eVTOL offering—the Pipistrel 801—and embarking on a hybrid-electric cargo drone project. Coming from Pipistrel, the industry leader in electrically powered aircraft and the manufacturer of the first electrically powered two-seat trainer, the Alpha Electro, this was a weighty move.

Even industry stalwarts must move and shake when disruptive trends work their way toward mainstream acceptance.Although scale models had flown and full-scale systems tests were made, a Pipistrel spokesman said that the company was moving away from the 801 project for now, knowing that regulators weren’t ready. Uber, he said, which has been publicizing a 2023 start date for its eVTOL service, “now realizes that it’s impossible without an extended validation period.”

After two to three years of experience with the cargo drone, Pipistrel said it would be able to apply insights to the 801. Target endurance of the drone is set at 45 minutes to one hour. Other details about the structure, dimensions, and propulsion of the drone have yet to be revealed. At one point, rumor had it that a hydrogen-cell/electric hybrid power configuration was in the works. But Pipistrel Director of Research and Development Tine Tomažič said, “As for our large cargo-delivery UAV, we will be communicating about the program at a separate occasion, when we are ready to unveil the exact specifications, purpose, and capability. For the time being, let me just comment that nowhere was a claim made that our cargo drone utilizes—or does not utilize—hybrid electric-hydrogen propulsion. The type of propulsion will be unveiled together with the vehicle itself.”

Previously obscure Joby Aviation secured $100 million in funding from Intel, Toyota, and JetBlue in 2018; another $590 million came from Toyota in 2019. That put Joby on the map, on the financial pages, and on the Uber Elevate roster. A prototype of Joby’s S4 eVTOL made its first flight in 2018, but the company keeps a tight clamp on news. Reports indicate it’s a six-tiltrotor design capable of doing 200 mph and flying for more than 150 nm. The company is based at the Marina, California, Municipal Airport, where it plans to have a 580,000-square-foot factory. In other news, thedrive.com reports that Toyota may well be involved in another eVTOL that’s been flying at California’s Mojave Air and Space Port.

Hyundai is also in on the action. Recently added to the Uber Elevate fleet, the Hyundai SA-1 has yet to fly, but is currently scheduled to enter service in 2028. Hyundai is also developing what it calls a PBV (purpose-built vehicle). Think of it as an autonomous cargo pod or bus. It can serve as a shuttle between downtown pickup locations and eVTOL hubs. It’s all very futuristic. Just search for Hyundai PBV on YouTube.

The quietest recent move in the eVTOL world must surely have been Rolls-Royce’s acquisition of electronics giant Siemens’ electric and hybrid-electric aerospace propulsion unit. For years it was Siemens that set the tone and led the field in general aviation electric motors. It dominated the scene, and made the motors for virtually all electrically powered aircraft—eVTOL or conventional configuration. More proof that even industry stalwarts must move and shake when disruptive trends work their way toward mainstream acceptance.

More and more, it seems that eVTOLs will earn a niche. The big money can make it happen. The question is when, and powered by which method. 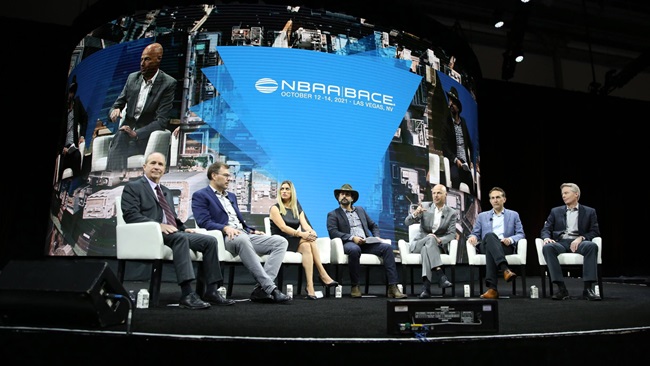