Get the app Get the app
Get the latest news on coronavirus impacts on general aviation, including what AOPA is doing to protect GA, event cancellations, advice for pilots to protect themselves, and more. Read More
Already a member? Please login below for an enhanced experience. Not a member? Join today
News & Media Musings: Flight of the 'Enola Gay'

An August day that changed history

The heavily laden B–29 taxied slowly toward Runway Able, one of four parallel runways clustered at North Field on the northern tip of Tinian, a tiny green dot in the vastness of the Pacific Ocean. The flight, designated as Dimples 82, was cleared for takeoff. 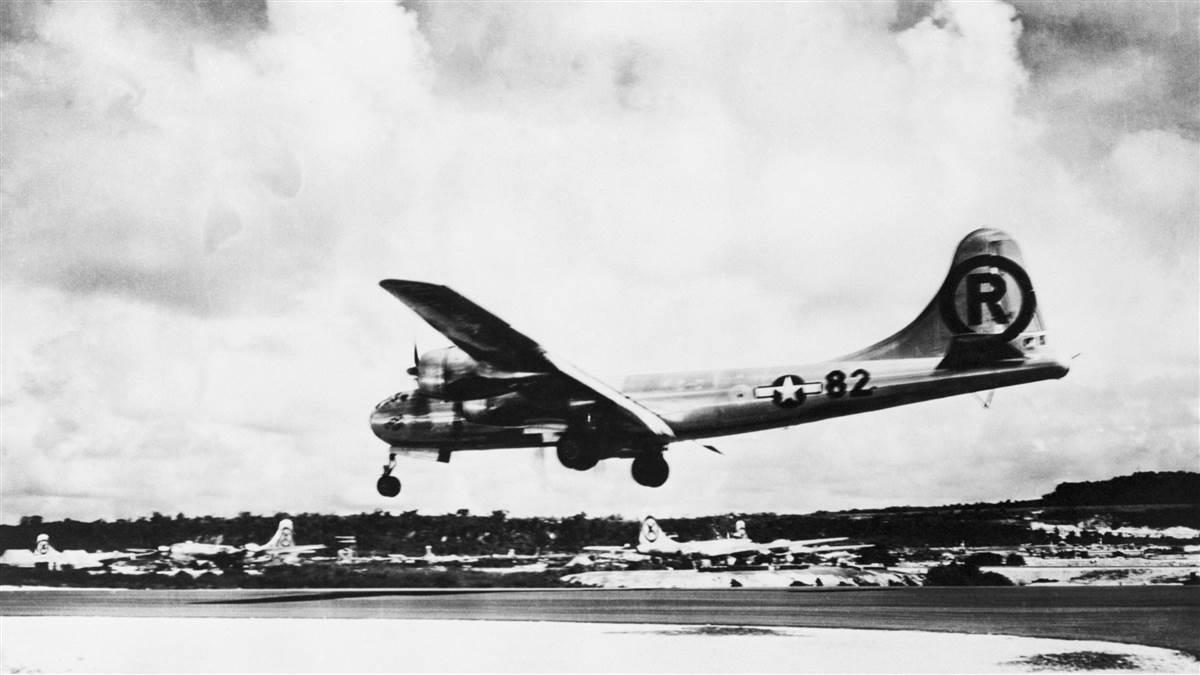 Army Air Forces Col. Paul Tibbets steered the Superfortress onto the asphalt and crushed-coral runway. None of his 11 crewmembers knew the exact nature of this mission, and they would not know until after takeoff. There were uncertainties about this flight, explaining why in one pocket Tibbets carried a small box containing 12 cyanide tablets.

Lined up with the runway, Tibbets “stood” the throttles, “walking” them differentially to keep the nosewheel on the centerline. When the tall rudder began to bite the air at 60 to 65 mph, he gave command of the throttles to his flight engineer, Wyatt Duzenberry, who set maximum power. So precious and critical was the sextant on this flight that the navigator, Theodore Van Kirk, held and cushioned it in his lap.

At 130 mph Tibbets gingerly raised the nose just enough to elongate the nosewheel strut. The Superfortress sniffed the tropical night sky and consumed almost the entire 8,500-foot-long runway, reaching 155 mph. At 2:45 a.m. local time on August 6, 1945, the Enola Gay pushed the ground away and lifted thunderously into the darkness for a rendezvous with destiny.

The Enola Gay passed over Saipan while cruising at 4,700 feet. Safely airborne, the “weaponeer,” William “Deak” Parsons, descended into the unpressurized forward bomb bay to arm the device code-named Little Boy, a misnomer if there ever was one. Coated with dull gunmetal paint and described by Tibbets as an “ugly monster,” the 12-foot-long bomb was adorned with handwritten messages for Emperor Hirohito.

Tibbets and his crew were not alone. Six other B–29s were involved in the operation. Three were sent ahead to report on weather conditions at the target and two alternates. (The mission required visual conditions.) Two others escorted the Enola Gay. One was a photo plane and the other carried scientists and an assortment of instrument packages that would be dropped by parachute to take scientific measurements. The seventh B–29 stood by at Iwo Jima in case Tibbets’ airplane had mechanical difficulties.

Pilots were reluctant to volunteer for duty on the new Superfortress. The airplane had a reputation for being difficult to fly. It also had engines that overheated easily.The sun rose before the Enola Gay arrived over Iwo Jima for a rendezvous with the two escorts. The bombers circled Mount Suribachi at 9,300 feet before setting a northerly course for Japan. They maintained this altitude until an hour from the target and then climbed to 30,700 feet.

On August 17, 1942, Paul Warfield Tibbets commanded the lead B–17 Flying Fortress during the Eighth Air Force’s first bombing mission in Europe. He was a highly experienced bomber pilot when assigned to organize in Grand Island, Nebraska, the school that would train B–29 instructors. Unfortunately, pilots were reluctant to volunteer for duty on the new Superfortress. The airplane had a reputation for being difficult to fly. It also had engines that overheated easily. Engine fires fed by the magnesium used to lighten the crankcases reportedly were so intense they could sever a wing.

Tibbets overcame the shortage of volunteers by training two members of the Women Airforce Service Pilots (WASP) to fly a B–29—women who had never flown a four-engine airplane. During their flight test, two engines had been shut down when the cockpit filled with smoke from an engine fire. Dora Dougherty and Dorothea Moorman handled the emergency without assistance and returned to the airport for a safe landing. This convinced male pilots that the airplane was not such a “beast” after all. (Dougherty and Moorman were the only women to check out in a B–29 during the war.)

Based on his experience and demonstrated leadership, Tibbets was later selected to organize and command the 1,800-man 509th Composite Group in Wendover, Utah, where he would train B–29 crews for a top-secret operation involving something called the Manhattan Project. He opted to command the first mission, saying that “if any mistakes would be made, I would make them.”

With the city shimmering in sunlight, Tibbets asked his crew, “Do we all agree that this is Hiroshima?” The aiming point was a bridge near the heart of the city. Crewmembers donned goggles with Polaroid lenses to protect themselves from a flash predicted to be 10 times the intensity of the sun.

None of the aircraft encountered any defensive action. (To conserve fuel and aircraft, the Japanese had decided not to intercept small formations of enemy aircraft.)

The bomb bay doors opened and at 8:15:17 a.m. local time, the bombardier, Thomas Ferebee, released the 9,700-pound device from the forward bomb bay. The aircraft “pitched sharply nose-up,” and Tibbets later commented that it felt as though he had been “slapped hard on [his] ass.” (When multiple bombs were released from a B–29 during conventional bombing, they were dropped from both bomb bays to prevent adverse shifting of the airplane’s center of gravity.)

The device reached its detonation altitude of 1,890 feet agl in 83 seconds. In that brief time, Tibbets had to get the Enola Gay to a slant range of at least eight miles from the blast. Using an escape maneuver he had practiced over Utah, he muscled the airplane into a 60-degree-bank, 155-degree right turn. He lost 1,700 feet and leveled off heading directly away from the target at maximum power. This left his tail gunner, George Caron, with the best view of a sight “beyond imagination.”

Shock waves caught up with and buffeted the Superfortress at 11.5 miles from the detonation. Tibbets said that he tasted lead in his mouth and felt electricity coursing through his fillings, the result of radioactive electrolysis.

The Enola Gay touched down at 2:58 p.m. on the same runway but in a different world than the one from which it had departed 12 hours earlier.

Three days later, America’s second and only remaining atomic bomb, Fat Man, was delivered over Nagasaki by another B–29, Bockscar, commanded by Maj. Charles Sweeney. The Japanese finally agreed to the U.S. terms of surrender on August 15, 1945. The war was over.

The best flyover you never saw 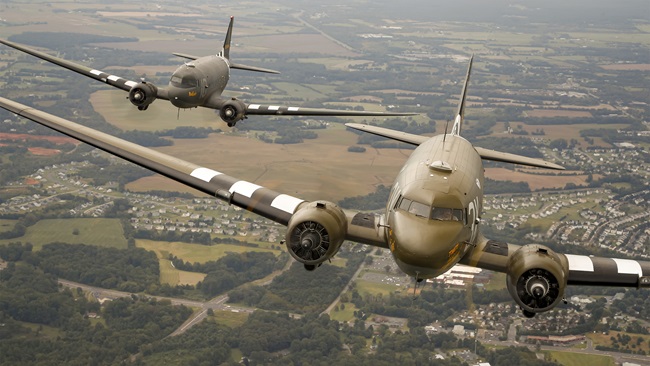