Get the app Get the app
AOPA Members DO more LEARN more SAVE more - Get MORE out of being a pilot - CLICK HERE
News & Media Proficiency: New airplane, new W&B

Check that center of gravity

During the almost 20 years we owned Sally, our Piper Cherokee 160, she escorted my family all over the country and even to the Bahamas. 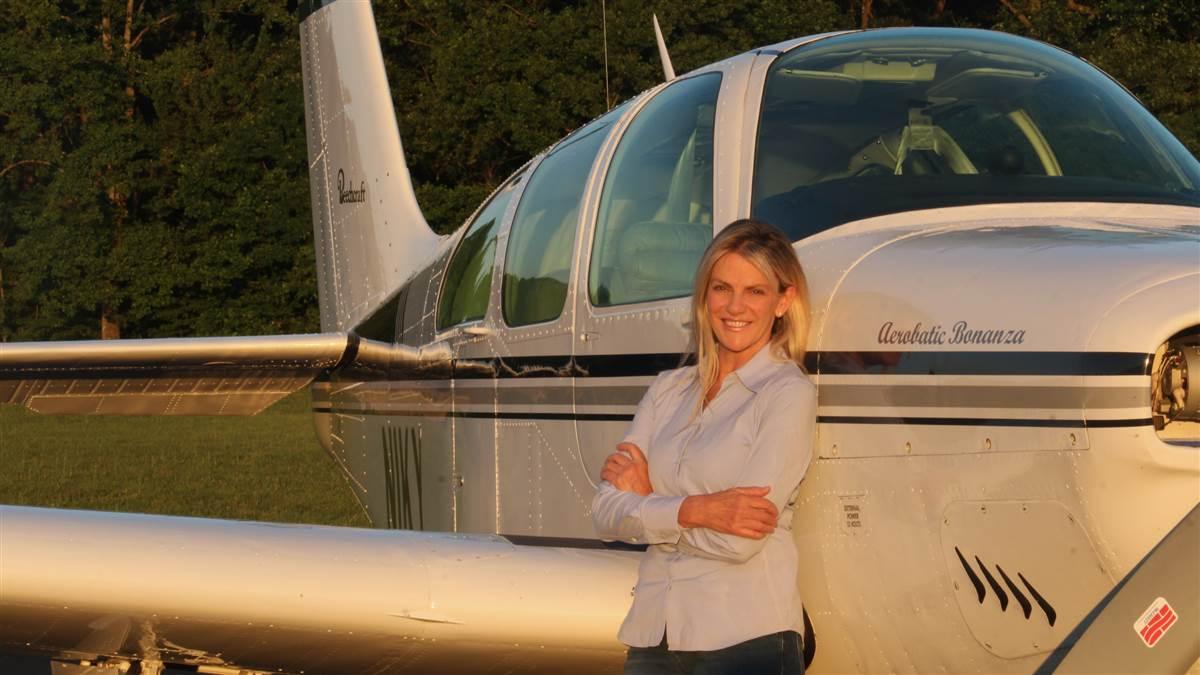 The aerobatic Beechcraft Bonanza Niky was a perfect fit for Catherine Cavagnaro and her family—once Cavagnaro made an avionics upgrade that changed the weight and balance and made more of the useful load available.

But while my sons Jack and Pete continued to grow, her useful load didn’t, and each year packing for our adventures became more difficult. At one point, I had a rule that no one could pack books or bring shoes beyond those we were wearing. While the thought of letting Sally go to another family was tough, the time had come. Knowing how hard this would be, I resolved to find the best airplane for my family—one to whom we would never have to say goodbye.

The Beechcraft Bonanza presented itself as an excellent compromise among comfort, speed, and efficiency. The increased useful load would allow us the flexibility to pack what we wanted, and the 160-knot cruise speed would put more of the country in easy reach. I heard that Beechcraft certified a version of the Bonanza in the acrobatic category that would let me play upside down. During a phone chat with my friend Michael Moore from Michigan, I gushed about the acrobatic Bonanza as the perfect airplane for us. He responded, “My aircraft mechanic does the annual inspections on an acrobatic E33C.” Half kidding, I said, “Well, please find out if it’s for sale and, if not, how about convincing the owner he needs to sell it to me?” To my surprise, that’s exactly what happened. Before I knew it, the prebuy inspection was done, a few squawks were addressed, and I watched my new airplane Niky land at my airport in Sewanee, Tennessee.

After the pilot shut her down, I hopped in and sat in a Bonanza for the first time.

Before I flew Niky, I studied the operating handbook and performed a weight and balance for various scenarios with the boys. With full fuel, she could take on more than 650 pounds and that was more than enough for us, bags, books, and even extra shoes. When I calculated the weight and center of gravity (CG), I was surprised how far back it was in the weight versus CG envelope—only an inch in front of the aft CG limit. The shock came when I considered the case with no fuel and found the CG position was behind the aft limit. Connecting the two points on the envelope with a line segment showed that the CG would travel behind the aft limit when about half the fuel had burned away, and continuing the flight could lead to a dangerous situation (see “The Mechanics of Weight and Balance,” p. 86).

I recognize Niky was a bit of an impulse buy, like grabbing a pack of gum near the cash register at the grocery store, and I don’t advocate buying an airplane that way.Given that I’m the lightest in my family and I had already assumed my older son Jack would sit up front with me, I couldn’t do much to bring the CG position forward except to decrease the load in the baggage area. That meant all Niky’s useful load wasn’t available to us and bigger changes were in order. Niky was not ADS-B compliant and most of her avionics were of a vintage that matched the “pictures of wood” vinyl coating on her panel. An avionics upgrade would provide an opportunity to lighten equipment in the rear part of the airplane. The old rotating beacon on the airplane’s back was heavy so Niky’s makeover included replacing that with a much lighter LED beacon.

The new digital avionics in her panel weigh less than the old steam gauges, a benefit for her useful load—but losing weight toward the front of the airplane wasn’t helpful. So I chose to add a standby alternator to provide redundancy and add weight in the engine compartment, to give her a more favorable CG position.

In the end, Niky emerged from quarantine at the avionics shop 80 pounds lighter and with an empty-weight CG position almost one inch forward of the original.

An inch may not seem like much until you consider that the total width of the CG envelope is just 10 inches. In a practical sense, it means that most or all of her useful load is now available.

Niky is now a beloved part of our family who has already taken us on amazing cross-country adventures. With inverted fuel and oil systems, the airplane makes getting upside down on a pretty day a joy. I recognize Niky was a bit of an impulse buy, like grabbing that pack of gum near the cash register at the grocery store, and I don’t advocate buying an airplane that way.

If I were to do this again, I would get the weight and balance sheet ahead of time and understand the limitations before I completed the purchase. But thankfully I don’t have to. The makeover proved quite an effort, but Niky is perfect to us and we have no plans to say goodbye.

THE MECHANICS OF WEIGHT AND BALANCE 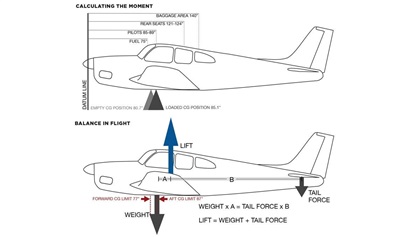 The longitudinal center of gravity (CG) of an aircraft is the point along the longitudinal axis at which the aircraft would balance if supported by a fulcrum. Using scales under each wheel, the CG position for the empty aircraft is computed by the manufacturer and listed in the weight and balance sheet that must be in the aircraft during flight. To allow the pilot to compute the CG position of the loaded aircraft, the manufacturer establishes a datum line from which the CG position at various loading stations are measured. For some, the datum line is the tip of the spinner and for others, it might be the firewall. For the Beechcraft Bonanza E33, it’s a line located 96.7 inches in front of the main wheels. What matters is not where the datum line is but that all measurements are made from the same line.

The weight is shown at the CG of the loaded aircraft. In order to achieve balance in flight, the weight times the distance between the CG and the center of positive lift (A) must equal the tail force times the distance from the tail to the center of positive lift (B). The ineﬃciency of this configuration is that the aircraft must produce more lift than its weight. In order to minimize the tail force, and therefore the total lift necessary, designers place the tail far back on the fuselage. 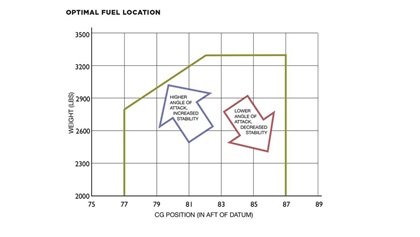 Aft CG: As the center of gravity of the loaded aircraft moves aft, a smaller tail force is needed so the wing can fly at a lower angle of attack. The aircraft achieves a faster cruise speed but features less angle of attack stability. The aft CG limit set by the manufacturer provides enough stability as required by certification guidelines.

Forward CG: With a forward CG, more nose-up trim is required to provide a greater tail force and the wing flies at a higher angle of attack. Cruise speed is slower but longitudinal stability is enhanced. The forward CG limit is set so that the aircraft will still have suﬃcient elevator authority to pitch the nose up for rotation on takeoﬀ as well as during the flare on landing.

The forward and aft limits for the Beechcraft Bonanza E33C, drawn to scale on the diagram, show how surprisingly narrow the acceptable center of gravity range is.

As the plotted value of CG position and weight moves toward the upper left, more nose-up trim is required to maintain level flight. Flaps down, power oﬀ, and operating in ground eﬀect all exacerbate the situation. So the upper left part of the envelope that corresponds to heavy weight and forward CG is often missing, as there may not be enough elevator authority to raise the nose in the landing flare.