Get the app Get the app
AOPA will be closed July 4th, in observance of the Independence Day holiday. We will reopen at 8:30 am ET on Tuesday, July 5.
News & Media Par Avion

It is said of U.S. mail carriers, “neither snow nor rain nor heat nor gloom of night stays these couriers from the swift completion of their appointed rounds,” which takes on a nostalgic meaning when you realize that the first transcontinental airmail delivery was 100 years ago on September 8 through 12, 1920. 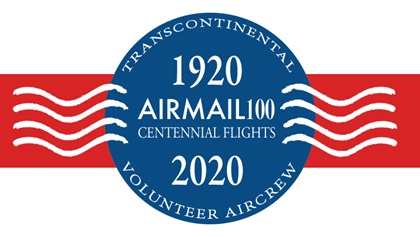 The first attempt at mail delivery via airplane was a short hop in 1911 and the mail was unceremoniously dumped by the pilot—Earle Ovington—from a Blériot monoplane to the ground. But these humble beginnings eventually did result in a concerted effort by the United States Postal Service to employ the airplane as a means to deliver the mail more efficiently and faster.

In fact, after the end of World War I, the post office was one of the largest employers of pilots returning from Europe and, by the mid-1920s, several contractors employed pilots, including Charles A. Lindbergh. But we’re getting ahead of ourselves….

It’s 1920 and the airplane has been an accepted, albeit novel, form of transportation since 1908. An aerial war has been fought and won; barnstormers canvas the nation; and records in speed, distance, and by gender have been set. The U.S. postmaster general believes in delivery by air, but the pilots and planners realize routes must be established for the service to be effective. Mail is delivered by rail, its routes determined by railway stops across the nation. Even with weather, darkness, and mechanical issues, it is believed airmail should be faster than by train. It is hard for us to imagine today waiting days for that check in the mail, that thank-you card acknowledging a gift, or—God forbid—that “Dear John” letter (will readers even understand any of this 20 years from today?).

But 100 years ago, a 15-stop route was established between New York and California, creating the first transcontinental airmail service. And it eventually proved faster than rail by 22 hours.

To honor that anniversary, organizer Bill Moore, a Nebraska writer and pilot, created AirMail 100 Centennial Flights, an event that retraced the 2,680-mile route with a relay of three dozen or so volunteer pilots carrying a sack of mail. Beginning at Republic Airport (FRG) in Farmingdale, New York (the original start was at the now-defunct Hazelhurst air base in Mineola, New York), and crossing the nation for four days, pilots in a variety of aircraft flew the original legs (or a close proximity).

Carrying a reproduction of the “1921 Pilot’s Directions New York to San Francisco” as their logbook, the pilots handed off their sack of mail to the waiting pilot at the next stop. In the sacks were postcards, with a special cancellation stamp, collected by Young Eagles and Scouts across the country.

After the wildfires subsided, the final handoff was accomplished October 16. Pilot Aaron Singer landed his de Havilland DHC–2 in the San Francisco Bay and Stephen Tucker paddled a dingy out to the aircraft to pick up the mail. San Francisco Postmaster Douglas Smith signed off the delivery and a missing man formation was flown overhead by the Beech Boys.

Christopher Freeze, a Virginia-based CFI, was chosen for the first leg. He flew a Cessna 182 from Republic to Bellefonte, Pennsylvania, early on the morning of September 8. Other volunteer pilots flew the additional legs, ending September 12 in California.

Freeze was one of the more than three dozen pilots who volunteered to reenact the first transcontinental crossing of the U.S. mail in an airplane. Dressed in a coat and tie for the first leg, he did not look like the daredevil pilots of yesteryear.

“As both a pilot and history buff, I could not be more proud or happy to be a part of this commemoration of airmail history, and I was thrilled to be given the role of carrying the first leg’s payload,” said Freeze. “The airmail system that these flights established became the basis for which reliable transportation via the skies became possible, and formed the powerful economic engine that is the modern airline industry.”

The first airmail pilots—called “cowboys of the air,” “mavericks of the sky,” and “a suicide club”—were often daring World War I aces who risked their lives to prove that flying the mail was viable. Between 1918 and 1925, 35 airmail pilots were killed flying the mail. Max Miller, a 25-year-old pilot, died in 1920 when his all-metal Junkers caught fire and crashed. Witnesses said they saw him throwing bags of mail out the window before the crash.

Assistant Postmaster General Otto Praeger was legendary for pushing the pilots, their equipment, and the fledgling airfields beyond their ability. He insisted on a timely schedule and was inflexible. He was not a pilot.

But the airmail pilots risked their lives for decent pay ($3,500 annually) and the thrill of the job. Some were true mavericks, stopping on their routes for a cigar smoke in the middle of a farmer’s field or testing their own mettle by making a game out of the flying, or launching into challenging weather. Their aircraft were often prewar biplanes held together with a hope and a prayer.

“As the Cessna 182 flew over the route between New York and Pennsylvania, my co-pilot and I were blessed with fair skies and smooth air,” said Freeze. “But that speed and comfort exist only because of those who came before. We could look down upon the mountain ranges below with awe, not fear. Those pilots of yesteryear, in open cockpits flying canvas wings, were indeed brave, and it was an honor to remember their service and sacrifice for the betterment of aviation and our nation.”

Each day of the four-day reenactment saw four legs of flight, a different pilot and different aircraft waiting at each stop. But, of course, like the flights 100 years ago, there would be weather, mechanical issues, and drama. Organizer Moore kept a running account of the activities and flights, daily sending out emails and posting on Facebook.

“Maybe the most engaging leg was the one flown in a Rans S–7 homebuilt,” said Moore. “Its performance most closely matched that of the old de Havilland DH–4s, while flying over one of the most dangerous stretches of terrain airmail pilots had to deal with in 1920. It killed more than its share of fliers. I was relieved when pilot Gene Salvatore landed, mission accomplished.” Salvatore flew the first day’s second leg VFR over the Allegheny Mountains.

On day three, the volunteer pilots faced challenges in the form of freak snow squalls over the Rocky Mountains. First, none of the original pilots were IFR qualified, so David Ott stepped up to make the flight from Omaha to North Platte, but his Bonanza was in maintenance for an unknown issue. He borrowed a local flying club’s Cessna 172 to fly to North Platte, Nebraska. Then the bad weather loomed but contingency plans to have a local volunteer drive the mail bag did not have to be employed.

“The next challenge was how to get the mail bag from North Platte to Cheyenne,” wrote Moore in an update. “And this morning JT Grainger came to the rescue. He called from Sheridan, Wyoming, where the sky was clear as a bell, to offer his help. I asked if he’d be willing to fly to North Platte on Thursday morning to retrieve the mail at Tregor-Dugan Aviation, the FBO on Lee Bird Field, and fly it to Cheyenne. He agreed. Relieved that Blanche Cohen didn’t have to drive from Colorado to pick up the bag and drive it to Cheyenne.”

On day 4, pilot John Sawatzky, in his Cessna 182 with co-pilot Stephen Tucker, flew the final leg through the smoke from the wildfires in California.

“Coastal fog and smoke from wildfires prevented Steve Isaac from getting off the ground at his home base this morning to fly the Sacramento leg, so Sawatzsky and Tucker are doing what U.S. Air Mail pilot Monte Mouton did 100 years ago today: flying nonstop to the Bay Area. Right now, their ETA shows 10:20 local time,” wrote Moore. The last landing that day was at Concord, California’s Buchanan Field and then the mail was driven to San Francisco, delivered to the postmaster, much the same time as 100 years ago (see “The Route,” right).

“Between COVID-19, the sudden economic contraction, and now unprecedented wildfires causing apocalyptic gloom over the Bay Area, I am amazed and yet heartened that we’ve actually gotten this purely voluntary project this far,” said Moore. “It shows you what we can do when we put our minds and our hearts together on a project that we feel is worthwhile.” 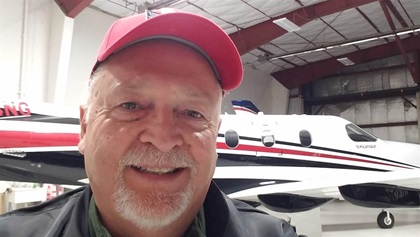 Nineteen years ago, America—correct that—the world, was shocked by terror attacks using airliners that knifed into New York’s World Trade Center, plowed into the Pentagon, and dug a crater in a field in Pennsylvania. Some 2,977 people lost their lives that terrible day. More, many more, would follow in its wake. We all remember where we were that Tuesday morning because of it.

But let me tell you about another 9/11. A good one, I believe—this one in the city of San Francisco exactly 100 years ago, when a converted World War I-surplus Army bomber descended across the sparkling waters of the bay that afternoon. Looking over the airplane’s long nose with its clattering Liberty V-12 engine, the pilot, E.E. Mouton—nicknamed “Monte”—could see the fabled Golden Gate through which tall ships could still sail. There was no Golden Gate Bridge, nor San Francisco-Oakland Bay Bridge, for that matter. They were more than a decade away. Alcatraz Island was there, a military prison and fortification.

Mouton’s destination wasn’t the Army’s Crissy Field at the foot of the Presidio, but the former fairgrounds of the 1915 Panama-Pacific International Exposition just to the east. A couple feet in front of his open cockpit was a storage compartment modified to hold bags of mail, some 400 pounds of letters. Cutting the engine to an idle, the DH–4 glided across the waters of the bay, touched down on the grassy field, and ponderously taxied to a stop near a crowd of onlookers surrounding a U.S. Post Office parcel truck.

U.S. airmail plane No. 151 had just made history, completing a 2,561-mile relay over four days, involving multiple government airplanes and pilots that had started on Long Island, New York, on the morning of September 8.

On hand to help unload the sacks of mail was San Francisco Postmaster Charles Fay. He beamed with obvious pleasure and probably a sense of relief under his bowler hat. The airplane, the pilot, and—most importantly—the mail that had begun its transcontinental journey was down safely and he could wire back to his tough-as-nails bosses in D.C.

With the successful completion of that flight, America, in effect, was about to be ushered into the modern age. The country was no longer on a war footing and the Spanish flu pandemic of 1918-19 was finally fading. The 1920 presidential election was less than two months away. Before the decade was out, the first embryonic airlines would emerge, airplanes would be equipped with radios, a nation-spanning network of lighted airways would be built, canvas and spruce would give way to aluminum spars and skins—all driven largely by two things: the pursuit of profit and improved safety.

The seemingly simple task of ferrying Sears catalog orders; business documents; birthday greetings; and, yes, love letters a day or two earlier by air instead of by train would prove the catalyst that America needed to emerge as a world leader able to flex its muscles in so many positive ways. Mouton’s landing on 9/11 was a little-noticed event worth only a few column inches in the press of the day, but like a single spark, it would help generate a wildfire of innovation.

Bill Moore is an aviation writer, pilot, and the organizer of AirMail100 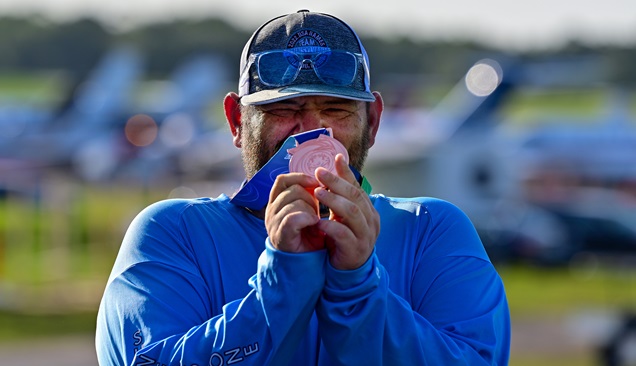