Santa is a GA pilot

For 50 years, pilots in Michigan have delivered Christmas joy to needy kids

You say you don’t believe in Santa Claus? In Michigan you’d be proven wrong. Very wrong. 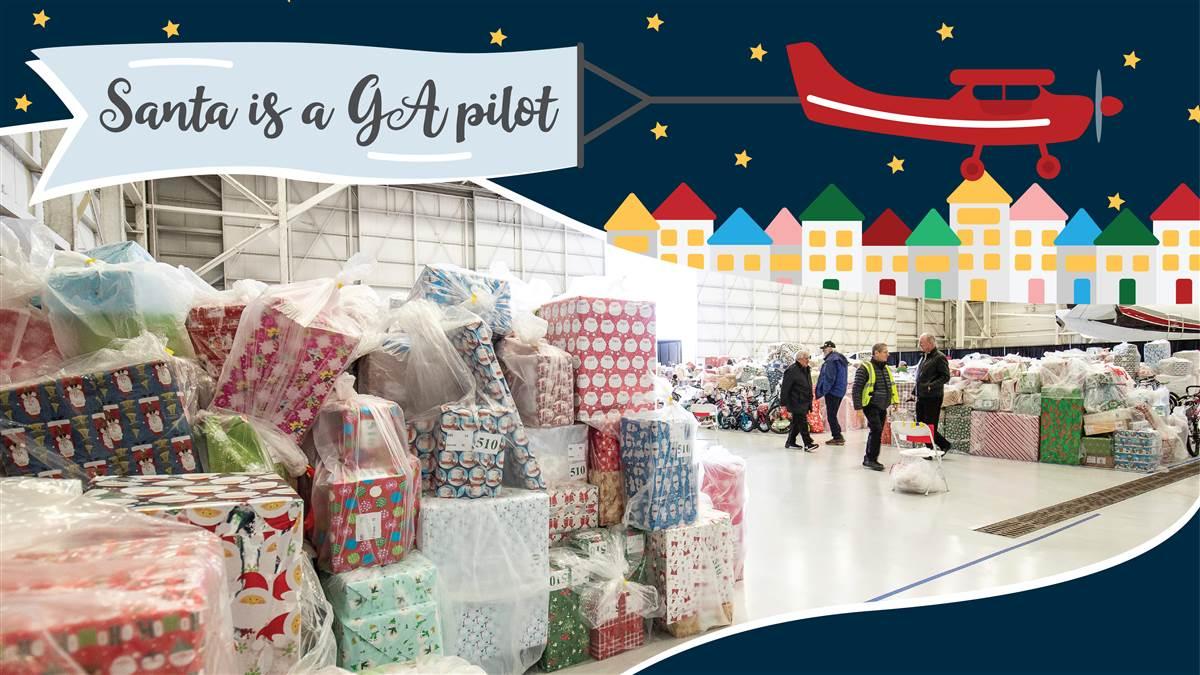 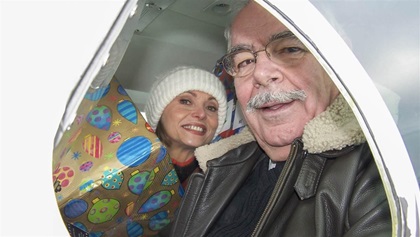 Participation is its own reward

Volunteer coordinator Dean Greenblatt, a former airline pilot turned lawyer, has participated in Operation Good Cheer for many years. “I used to work on the ramp,” he recalls. “Each year this gentleman volunteered in his Cessna 150; he could only hold one box of presents on his passenger seat. I saw him year after year. The last time I saw him he was over 90 years old. I found out he passed away. He had never missed a year. His family said it was the most important day of the year for him.”

On the first weekend in December, Santa is a general aviation pilot. And he’s flying a Beechcraft Bonanza. Or a Cessna 172. Or a Cherokee Six. Maybe even an experimental Rutan Defiant or a massive Twin Commander. If it flies and it’s got room for gifts, any trusty aircraft will do. It’s called “Operation Good Cheer” and from humble beginnings to its fiftieth anniversary this year on December 5, this statewide event proves that yes, there really is a Santa Claus.

Operation Good Cheer began when Ford Motor Co. engineer Constantine “Taki” Kortidis received Christmas cash to put together a company party. He thought the money would be better spent on children. He gathered the cash and went in search of an organization that would help him spend the money on gifts for kids. He found Child and Family Services of Michigan Inc., which would accept the gifts and distribute them across the state. There was only one problem: how to transport the presents? Taki, a CFI and active GA pilot, offered to fly them in his Cessna 210. That first year he delivered five loads of presents. Some 66 children in foster care benefited from Taki’s kindness that year.

“He was this short guy—kinda shaped like Santa—and had this big laugh that would fill the whole place,” remembers pilot Sean Stannard, who says he “stumbled” on Operation Good Cheer and Taki many years ago. “The whole thing is really about the pilot community. One year he was forced to land, and several pilots came up to him and asked what he was doing with his 210 filled with presents, and he said he was delivering to kids—but his airplane was broken. So, the pilots stepped up and loaded the presents into their aircraft, and that’s how the whole thing started.”

Stannard calls Operation Good Cheer a “hometown event” and revels in the idea that “one small thing can turn into something as big as this—just the way Christmas should be.”

A pilot with more than 10,000 hours, Kortidis was killed in an automobile accident in 2008. But Operation Good Cheer continues.

'This is all for the kids'

On December 7, 2019, Oakland County International Airport (PTK) in Pontiac, Michigan, was overrun with aircraft, pilots, trucks, and presents. Lots and lots of presents. The massive hangar at Pentastar Aviation was stocked with wrapped presents piled more than 10 feet tall, and rows and rows of bicycles lined the floor. Last year 256 aircraft arrived on a cold Saturday morning to load more than 25,000 gifts that were transported to 31 airports across the state, bringing the joy of Christmas to 7,159 children.

Longtime volunteer Paul Zerkel summed it up: “This is all for the kids.”

There are more than 13,000 children in foster care in Michigan. “Children coming into the care of social service agencies are often at their most vulnerable, having the transition of being removed from the only family they have ever known, to being placed in a different home with a different family, sometimes in a different school, and experiencing different lives entirely,” said Sherry Brackenwagen, administrative director of Child and Family Services of Michigan Inc. “Operation Good Cheer strives to make the situation a little easier by showing these children that there are caring people in the community who are thinking about them at Christmas.”

Brackenwagen’s staff receives wish lists from the children in the 79 participating agencies. They list six gifts they wish Santa would bring, but donors are only asked to contribute three. (“No one ever gives just three,” she notes.) The gifts are wrapped and sent, or hand delivered to the Pentastar hangar, on Friday. Volunteers spend the day unloading truckloads of presents, sorting them by numbers and letters that will ensure the right gift gets to the right child. That in itself is a massive logistical undertaking. But somehow this coordinated chaos works and when aircraft begin arriving at sunrise on Saturday morning, the gifts are ready to be loaded on the volunteer aircraft.

Pilots check in, chose the location they’d like to fly to, are given the number of the truck with their gifts, and taxi to the truck. Volunteers pack the aircraft with presents (“I once transported 13 bikes,” Stannard said) and taxi to join a conga line of aircraft heading out to fly across the state. Locals like to show you their left hand when describing the shape of Michigan; Pontiac is down between your pointer finger and your thumb. Aircraft will fly as far as the top of your ring finger. IFR pilots may choose those locations farther north where weather could be an issue, but most pilots fly VFR.

The event is never canceled; if aircraft can’t fly, the presents will be trucked across the state. “But a GA flight is much more desirable,” said Dean Greenblatt, volunteer organizer and pilot. “The logistics are frightening; we’ve figured out how to do this incrementally, over the nearly 50 years we’ve been doing this.” 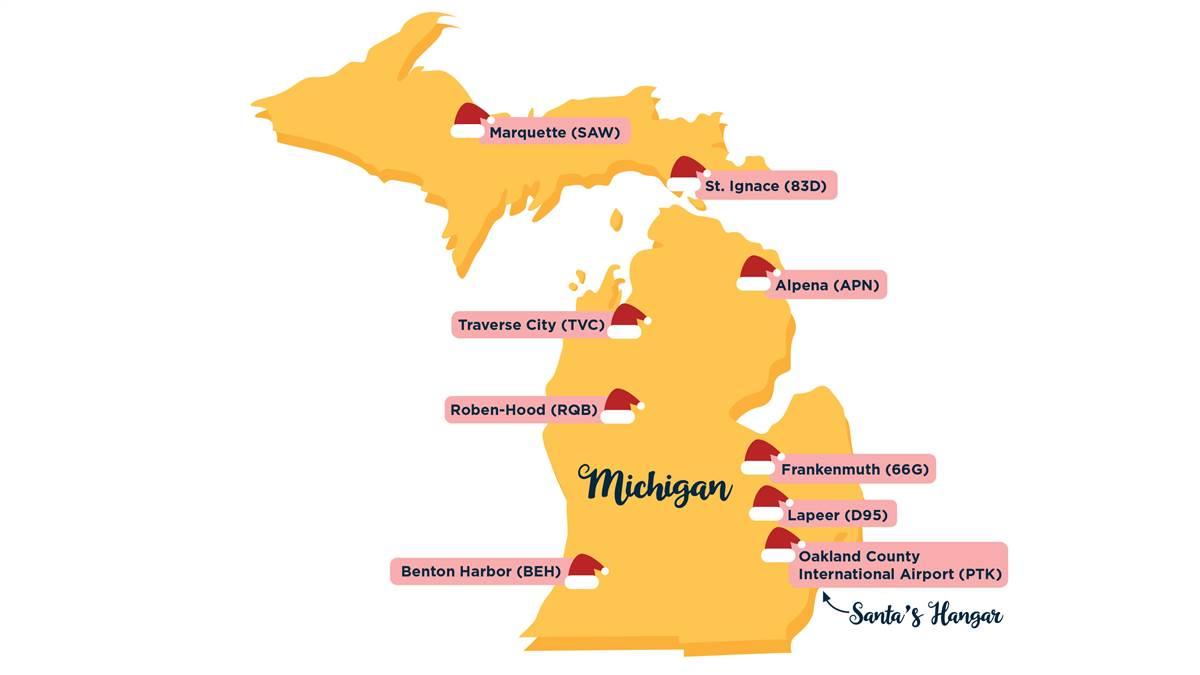 Some of the more than 30 airports around the state of Michigan that welcome the pilots of Operation Good Cheer.

At locations such as Roben-Hood Airport (RQB) in Big Rapids, Michigan, hundreds of local families wait for the arriving aircraft. They form another conga line to transfer the presents from aircraft to a storage shed or other trucks. There’s snow on the ground, hot chocolate and homemade goodies in the small terminal, and holiday music playing. Greenblatt says many pilots choose locations based on the spread each community will offer—“like, who has the best chili?” he says.

Some of the children at the airport are foster kids getting their first peek at what will arrive on Christmas day. Chad Saxton of Eagle Village tells of a foster teen in his organization who quietly held on to her gift. “You know how kids grab and rip open packages? She just held it and slowly unwrapped it, telling me that although her mother had tried hard, she’d never been able to give her a Christmas present. This was her first gift,” he said.

“While the event is exciting, with so many people having the spirit of giving, it’s really about creating an environment where these kids feel loved on Christmas morning,” said pilot Jerry Fullmer. “The sad reality is they have been removed from their homes and have been abused and neglected. Many have been abandoned and don’t know what it feels like to have someone who has their back. Well, they will know that we have their back. We want them to experience the feeling of hope.”

Santa's at the controls

Pilots will strip down the interiors of their aircraft to have room for as many gifts as possible. “For this one event, they’ll turn their airplanes into tramp freighters—sleighs! Santa’s at the controls,” says Greenblatt.

Gifts range from clothing to bicycles and have been as large as full-size basketball hoops and four-wheelers, says Brackenwagen. Each is individually wrapped by a team on site. And sometimes rewrapped if deemed unsightly. “The pilots come with Santa hats on; everyone takes this event very serious,” she said, adding that the thank-you notes she receives after Christmas bring her to tears. “One teen wrote she couldn’t believe that someone cared enough to spend their own money and buy a gift for her. My Christmas wish is that every single child knows they are loved.”

“Nobody really knows the entirety of the program and how many people it touches,” said Greenblatt. “Volunteers, pilots, donors, gift wrappers, children, truckers—my estimate is at least 25,000 people. And, of course, you couldn’t pick a better time of year to fly in Michigan; we have all the weather there is, but somehow the day before can be terrible weather but the day of the event it’s fine. In 2018 it was warm, and we worked in short sleeves.”

Air traffic controllers volunteer their time on Saturday morning because while PTK may see 600 operations in an 18-hour period, it only sees this kind of activity once a year, said ATC manager Rob Wagner. He has manned Operation Good Cheer for the past 15 years. “It’s the busiest day of the year,” he said.

“People know to come to PTK on the first weekend of December each year,” Brackenwagen said. “It’s a joyful day.”