Get the app Get the app
Already a member? Please login below for an enhanced experience. Not a member? Join today
News & Media Aircraft Maintenance: Fighting a cockpit fire
Sponsored by Aircraft Spruce

There are few things as frightening as a fire in the cockpit of an aircraft. 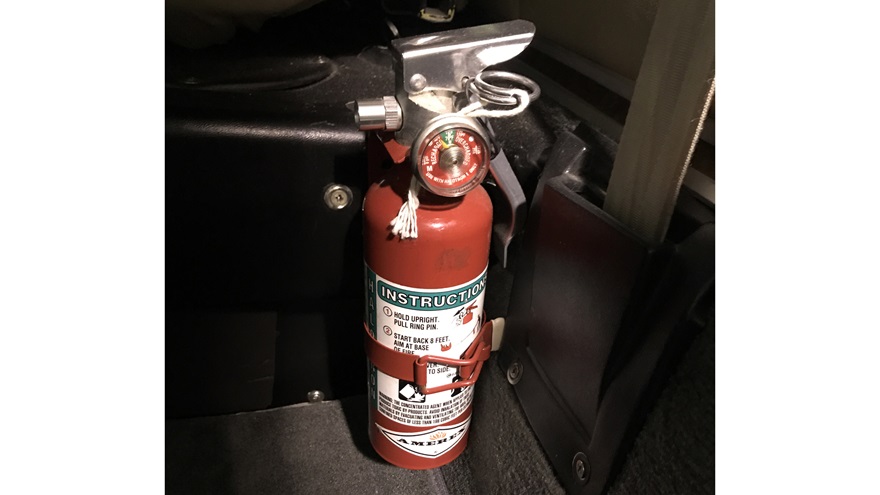 Note the low charge on the gauge. A fire extinguisher without a proper charge may not be there for you when you need it. Photo courtesy of Jeff Simon.

Trapped in a confined space with no opportunity for rapid exit while in flight, your options are severely limited:

Most aircraft flight manuals have emergency checklist topics for in-flight fires. However, the very nature of a cockpit fire makes it impractical to refer to the checklist during the emergency itself, so it pays to have this drill committed to memory.The typical in-flight fire checklist goes something like this:

Identifying the source of the fire can be crucial in resolving a fire emergency without creating another emergency in the process, such as an engine-out landing. Electrical fires are often preceded by a distinct electrical burning smell. If this is the case, you may have time to shut off the master switch and alternator, potentially resolving the issue, before you proceed to shut off fuel and spark to the engine, committing yourself to a power-off emergency landing. However, you’ll need to proceed quickly through the evaluation process to ensure that you don’t continue to let fuel flow if that is indeed the source of the fire.

Some aircraft have dedicated air-shutoff valves that are designed to prevent smoke from an engine fire from entering the cockpit. If the fire is in the cockpit, you’ll need breathable air. So, be sure to open vents early in the emergency response.

Fighting the fire typically means one thing for general aviation pilots: portable fire extinguishers. There are two main categories of fire extinguishers on the market: dry chemical/foam and halon/Halotron. While the most common and inexpensive extinguishers are of the dry chemical type, they are not appropriate for aircraft use because they reduce inside visibility and make it nearly impossible to use any of the instruments or even see out of the aircraft because everything becomes covered in the agent. Dry chemical agents are also extremely corrosive to aircraft components, so they should be avoided for use on the ground as well. That leaves two main options for aircraft use: Halon 1211 or Halotron 1. Halon has been, and remains, the recommended agent for aircraft use. It is extremely effective and relatively lightweight. Unfortunately, it is also highly damaging to the ozone layer. Its production was discontinued in 1994. However, you can still purchase new Halon 1211 extinguishers today because a gas recycling program keeps supplies available for manufacturers. Halotron 1, on the other hand, is much safer for the environment and the gas is currently in production. The downside to Halotron is that it’s not as effective as halon by weight. It takes approximately twice as much agent to do the same job. Therefore, Halotron extinguishers are larger, heavier, and slightly less ideal for aircraft.

It’s interesting to note that misconceptions about the dangers of using halon have been a persistent problem that the FAA has been trying to rectify. FAA Advisory Circular AC 120- 80A, In-Flight Fires, describes one instance in which a flight attendant “went to the flight deck to inform the flightcrew of a fire and asked the captain whether to spray halon into a vent where she suspected a fire. The captain instructed her not to use the halon extinguisher, indicating he was concerned about spraying halon in the cabin.” The AC describes a separate instance in which “an off-duty company pilot considered using a halon fire extinguisher, but decided against doing so because he was concerned that the halon ‘would take away more oxygen.’ In each instance, the crewmembers lost critical time and delayed the aggressive pursuit of the fire.” The FAA concluded: “NTSB investigations of in-flight fires indicate that crewmembers have been hesitant to use halon extinguishers during flight because of mistaken ideas about adverse effects of halon”…. “The toxic effects of a typical aircraft seat fire, for example, far outweigh the potential toxic effects of discharging a halon fire extinguisher.” Bottom line: Use it. It works and is safer than the alternatives.

Regardless of your choice in fire extinguisher, you will need to ensure that it remains in operating condition. Extinguishers that have a gauge are usually rechargeable and require six-year maintenance and 12-year hydrostatic testing. Disposable units without gauges should be checked monthly per the manufacturer’s instructions. Extinguishers should also be mounted in readily accessible locations within reach of all occupants.

Fire in the cockpit is something to be prepared for as a pilot. Arming yourself with the knowledge and tools to fight the fire is your best chance for a happy ending to an unfortunate emergency. And, don’t forget to include fire emergency instructions in your passenger briefings. It’s better to have a captain and a crew of firefighters on board than to take on all roles yourself. Until next time…happy flying!