Get the app Get the app
Get the latest news on coronavirus impacts on general aviation, including what AOPA is doing to protect GA, event cancellations, advice for pilots to protect themselves, and more. Read More
Already a member? Please login below for an enhanced experience. Not a member? Join today
News & Videos ‘I miss my gal’

The lost art of America’s story

I like artist Gary Velasco’s vision of a World War II dogfight: German pilot looks out his windshield to see an American bomber on his tail, but he’s distracted by the vision of a scantily clad, half-naked woman on the nose of the U.S. aircraft. The distraction costs the Luftwaffe pilot precious seconds and he and his aircraft become another victory for the Americans as the war finally comes to an end. 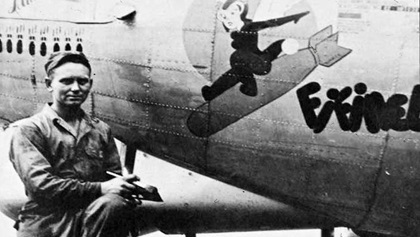 More than 300,000 aircraft were built and in use during World War II and the United States lost an average of 170 aircraft per day during the war. It was not uncommon to have a crew name an airplane and the nose artwork appear the next day. Most often, the painter was a crewmember who accepted cash or barter to paint the art. Crew chiefs or chief pilots came up with the name—often for their wives, their girlfriends, or actresses—and the artwork was inspired by Esquire calendar artists Alberto Vargas or George Petty. However, Cpl. Anthony (Tony) Starcer of the U.S. Army Air Forces 91st Bombardment Group is credited with painting nearly 130 aircraft, including Memphis Belle, Shoo Shoo Shoo Baby, General Ike, and Mount ’n Ride. Starcer painted the original nose art on the Collings Foundation’s B–17G Nine-O-Nine, which was destroyed in a recent accident. After the war, Starcer did not paint again until 1981 when he was asked to re-create the nose art for the restored B–17G Shoo Shoo Shoo Baby, based on Vargas’s “Hawaii” pin-up artwork and named by the aircraft’s World War II pilot Paul McDuffie for his wife’s favorite song. Another prolific nose artist was Cleveland, Ohio, native Don Allen, who is credited with painting nearly 40 aircraft. Allen said he did not paint nude women on aircraft because he was an Eagle Scout—although his Miss Dallas on a P–47 Thunderbolt is clearly naked behind a big cowboy hat. —JSW

Fanciful? Maybe, but as Velasco has been hand painting pin-up girls on restored aircraft and on metal panels to sell as memorabilia for the past 20 years, he’s had a lot of time to daydream about what it might have been like in the skies over Europe in 1944. “I often wish I could have been there,” Velasco said. “There was a romantic feeling, a sense of innocence by today’s standards. I put myself in their shoes. They had a mission, and everyone was gung-ho. And they missed home and the guys missed their girlfriends.”

Velasco has written the book on nose art, Fighting Colors: The Creation of Military Aircraft Nose Art, and Fighting Colors is the name of his company, located near Charlottesville, Virginia. If he feels an affinity to the nose artists of World War II, it makes sense. He was a housepainter; most nose artists were sign painters in an era when everything had to be hand painted. Because nose artists were “a dime a dozen,” as Velasco says, the “artwork” was often crude and usually unsigned. He has collected more than 8,000 original photographs of nose art and uses them as guidance for the art he creates. That includes the art he has painted on actual aircraft—Diamond Lil on a Commemorative Air Force B–24, Madras Maiden on a B–17G, Memphis Belle insignia and bombs on a B–17, and Doris Mae on a TBM Avenger.

Velasco studies the historic, black and white photos to determine the colors of the original work. That said, he also asks if he can have creative license when he paints on the aircraft. The CAF aircraft that is Diamond Lil was never an actual fighting aircraft in Europe, so when the organization restored that specific B–24, it took license with naming it Diamond Lil. Velasco researched the Diamond Lil original (based on a play written by Mae West in the late 1920s) and painted his version on the CAF’s B–24.

“Most nose artists were just guys in the outfit. The brass would let them get away with it—they may not be there tomorrow,” said Velasco.

“Get away with it” is a nice way of saying the painters could be a lot less politically correct with their images. While many nose art examples are cartoons and insignia, the nose art Velasco connects with are the sensuous pin-up girls that graced many aircraft. They are based on work by Esquire magazine artists George Petty and Alberto Vargas. Vargas painted the leading stars of the Ziegfeld Follies before eventually replacing Petty at Esquire for the publication of the first Varga Girl calendar in 1940 (publisher David Smart had the artist remove the S in his name). The “Petty Girl” was the “feminine ideal” of the American male, said Life magazine in 1939.

The calendar and the Petty Girl were extremely popular, and nose artists used the images as inspiration. While some of the nose art painters were talented—Tony Starcer and Don Allen (see sidebar, facing page)—the artwork could be crude. Velasco discovered this when asked to paint Doris Mae. First, the original rendering had the figure completely nude. Second, it was more a line drawing and less a finished painting.

“I knew the pin-up original—a Varga—so I asked to make the nose art nicer, like the Varga. The nose art was very crude and not likeable,” Velasco said. “Everyone liked her when it was finished but it didn’t take long for the HQ at CAF to say, ‘put her clothes on,’ so I painted a polka-dotted bikini on her.”

Rock music is blaring as we enter Velasco’s studio and warehouse outside of the historic city of Charlottesville. It’s easy to spot Velasco bent over a template he is making for artwork for The Ruptured Duck, which he will paint on an aluminum panel. Velasco’s long black hair drapes over his work, the music and his hair illustrating that while he is deeply connected with the World War II era in his work, his heart is in the 1970s.

“I got all the way through the ROTC stuff, was going to be a pilot, but then Van Halen happened,” Velasco said. He spent the next 25 years trying to be a rock star. In his studio are remnants of that period in his life. And he is slowly working on his private pilot certificate.

The Ruptured Duck template he’s working on honors the B–25B Mitchell that was in the Doolittle Raid over Tokyo in 1942. After the bombing, pilot Lt. Ted W. Lawson ditched the B–25 in the sea near Shangzhou, China. The ruptured duck was a symbol of honorable service, and lapel pins were awarded to honorably discharged servicemen between 1939 and 1946.

Little-known or obscure information about the aircraft of World War II, especially in the Pacific theater, is dear to Velasco. He’s especially enamored with the Pacific theater because, he says, the nose artwork was creative and especially risqué. “There was a time when you were free to do what you wanted to do—since so many didn’t come back. In the Pacific, the natives were half-dressed anyway. I did learn that General [Curtis] LeMay gave an order to clean everything up, but it was toward the end of the war and they just did what they [soldiers] wanted to do anyway,” said Velasco.

After house painting evolved into murals and more refined work, Velasco, who was living in Connecticut at the time and volunteered at the Bridgeport airshow, was asked to paint insignia on the movie Memphis Belle, owned by David Tallichet and which appeared in the 1990 movie of the same name. He then painted the Corsair that sits as the static display at Sikorsky Airport.

“Things kind of evolved from there and I started researching nose art. I re-created the famous stuff like Enola Gay and Memphis Belle on these panels. I can’t paint warbirds every day, that’s not my bread and butter,” he said.

After researching and studying the old photographs, Velasco digitizes the artwork, creates a template, and cuts, designs, and rivets the panels. “It’s almost like paint-by-numbers when I’m done because I’ve created the template,” he said. “It sounds easy but try blending flesh tones using the same paint as 100 years ago.”

His favorite commission was the design of a panel from a Consolidated PB4Y–2 Privateer Punky, which he created for a former crewmember. The family sent Velasco a photograph of the veteran with the nose art panel, telling Velasco that they heard stories from their grandfather they had never heard before.

“I love the smile on that guy’s face. People buy these panels and say their father or grandfather never talked about the war until he saw the nose art. A lot of those guys are gone now, but the panels make a difference in people’s lives.

“It’s crazy, right? Nose art. Half-naked women. But they are like family heirlooms, preserving a memory that most of us know nothing about.”