Get the app Get the app
News & Media Flying for the Culture: Courtland Savage

Editor's note: This story has been updated to correct the models of aircraft flown by Courtland Savage. AOPA regrets the error.
Courtland Savage did not grow up living and breathing aviation. He had a fear of heights. He saw airplanes at the Charlotte, North Carolina, airport, where he would occasionally go with his father. But he never saw anyone who looked like himself flying an airplane, so he didn’t think that was a possibility. 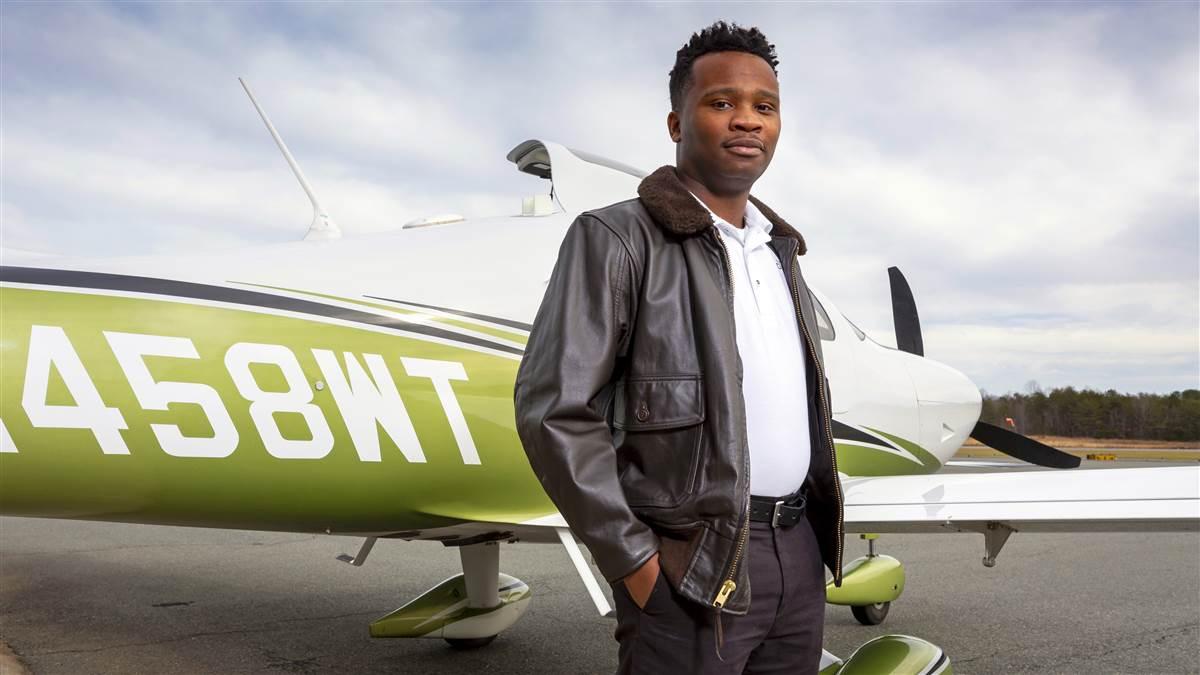 Who | Courtland Savage
Hours | “Right at about 1,500.”
Favorite aircraft | The C–17 Globemaster, “the first I worked on and wanted to fly.”
Extra | The name “for the culture” is taken from hip-hop trio Migos’ song Culture National Anthem.
Instagram: @flyfortheculture
Web: flyfortheculture.org

All this changed when Barack Obama was elected president in 2008. About to graduate high school, Savage decided that if a black man could become president, he could become a pilot. His parents were a bit skeptical. He’d never stuck with anything before. But they cosigned a loan for him to take flight lessons, which he repaid by working part-time scrubbing pots and pans in a hospital kitchen. After he obtained his private pilot certificate, Savage enlisted in the U.S. Air Force Reserve and became crew chief on a Boeing C–17 Globemaster. He earned a bachelor of science degree from Embry-Riddle Aeronautical University, and eventually he applied for the U.S. Navy’s Officer Candidate School. He trained in the McDonnell Douglas T–45 Goshawk and the F/A–18 Hornet and was at the top of his class.

Today Savage is a pilot for a regional airline. In his spare time he runs a nonprofit, Fly for the Culture (FFTC), whose aim is to give underserved children a chance to see what aviation is all about. Fly for the Culture organizes introductory flights for children. FFTC also collaborates with airports, airlines, and manufacturers to offer control tower tours; tours of maintenance facilities; and simulator sessions. The nonprofit also offers a $1,500 flight training scholarship, and it is partnering with area flight schools to give students discounted flight instruction.

Savage got the idea for the nonprofit after taking his cousins for sightseeing flights in a Cessna 150. “They loved it,” he said. “They wanted to go up over and over.” And he loved being able to do that for them. “I’ve flown F–18s, but that feeling—seeing their eyes open to something that they never even thought could exist [for them] was the greatest feeling in my life.”

He’s flying the Bombardier CRJ700 and 900 in his current job, and he will transition to the CRJ550 in early 2020. On his days off, Savage spends hours doing administrative and social media tasks for FFTC, answering emails and making phone calls, setting up events and sharing his love of aviation with young people. “I love it,” he said. “I’m about the mission and the mission only.”

FFTC focuses on diversity and inclusion, but Savage wants one thing known: The program is for all children. “I’m not asking for 20 percent of pilots to be black,” he said, “just to put out there that these opportunities exist. I’m doing my part to let that be known.”