Get the app Get the app
Get the latest news on coronavirus impacts on general aviation, including what AOPA is doing to protect GA, event cancellations, advice for pilots to protect themselves, and more. Read More
Already a member? Please login below for an enhanced experience. Not a member? Join today
News & Videos Escape plan 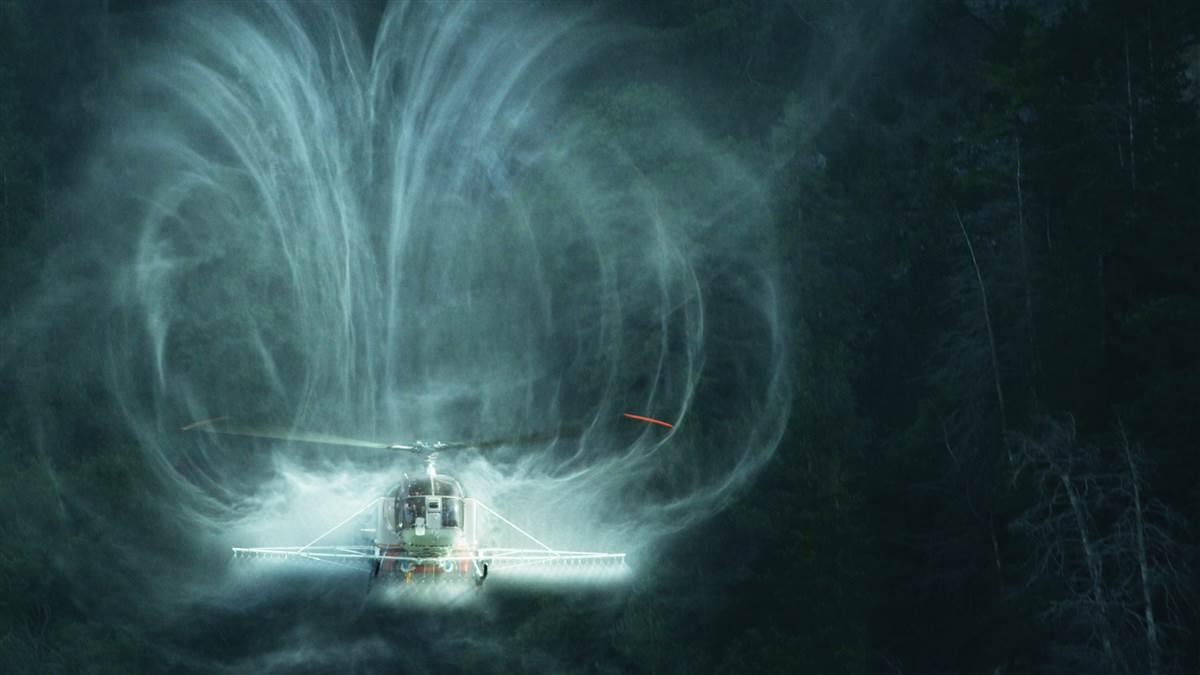 Courtesy of Aerialstage.com and Valair.ch
The FAA recognized the Vuichard Recovery technique in the October 2019 version of the Helicopter Flying Handbook.

This can result in a significant loss of altitude, often with catastrophic and tragic results. A helicopter, with rotary blades acting as airfoil lifting surfaces, is not dependent on forward airspeed for lift and is not susceptible to a fixed-wing type stall. However, an aerodynamic condition called the vortex ring state (VRS) can have the same end result as an airplane stalling: a sudden loss of altitude. Just as in a fixed-wing stall, it is imperative a helicopter pilot understand VRS avoidance, detection, and recovery.

There is a lot of confusion as to the name of this aerodynamic condition, with different U.S. military branches, the FAA, and other countries in disagreement as to the proper terminology. The result of this confusion is that “settling with power” and “power settling” often are used to describe what is really a vortex ring state. Without getting into a debate on the merits of the differing technical terms, I believe the VRS is the most accurate, and it is now used in the FAA’s Helicopter Flying Handbook.

Airplane and helicopter pilots know wingtip and rotor blade tip vortices are aerodynamically inefficient because they reduce the angle of attack across the airfoil with an increase of downward airflow. In the case of VRS the tip vortices are increased in size and magnitude—and additionally, secondary vortices are created in the inboard section of the rotor disc area.

The Helicopter Flying Handbook lists three conditions, which all must be met in order for VRS to have the potential of existing—slower than effective translational lift (ETL) of 10 to 15 knots airspeed, at least 20 percent power, and a 300-fpm descent rate or greater—in what is often called the 1-2-3 rule. It’s important to note all three of these conditions must be met for VRS to occur. During an approach it’s likely not advisable to decrease power, but simply decreasing the descent rate to flatten out the approach or adjusting airspeed to remain above ETL will remove one of the VRS requirements.

Helicopters are more susceptible to encountering VRS conditions when making downwind approaches, and doing vertical reference work such as long line external load operations. When conducting long line operations and hovering out of ground effect (HOGE), a pilot can inadvertently start a slight descent and suddenly find that all three VRS conditions are being met. Another higher risk area is at night when circling a potential landing zone looking for hazards. The pilot, who is fixated on the ground searching for wires and other hazards, will have a tendency to bleed off airspeed on the downwind leg—which in turn, if allowed to decay below VY , will also initiate a descent. Furthermore, when making an approach at night normal visual cues are lacking; unaided or with night vision devices the closure rate must be monitored with constant scan of vertical speed and airspeed. Day or night, it’s advisable during final approach to compare airspeed to groundspeed. Should groundspeed be higher than airspeed, a tailwind component is present, with a higher likelihood of VRS. Steep approaches are more susceptible as well, unless closure rate is low enough to where the descent rate is less than 300 fpm. Helicopter pilots with mountain experience will be keenly aware that the helicopter doesn’t actually have to be descending for VRS to occur; a sudden updraft of at least 300 fpm at airspeed of less than ETL will have the same effect as an actual descent. This updraft will create an upflow of air at the rotor tips and the mast area, which can induce VRS. 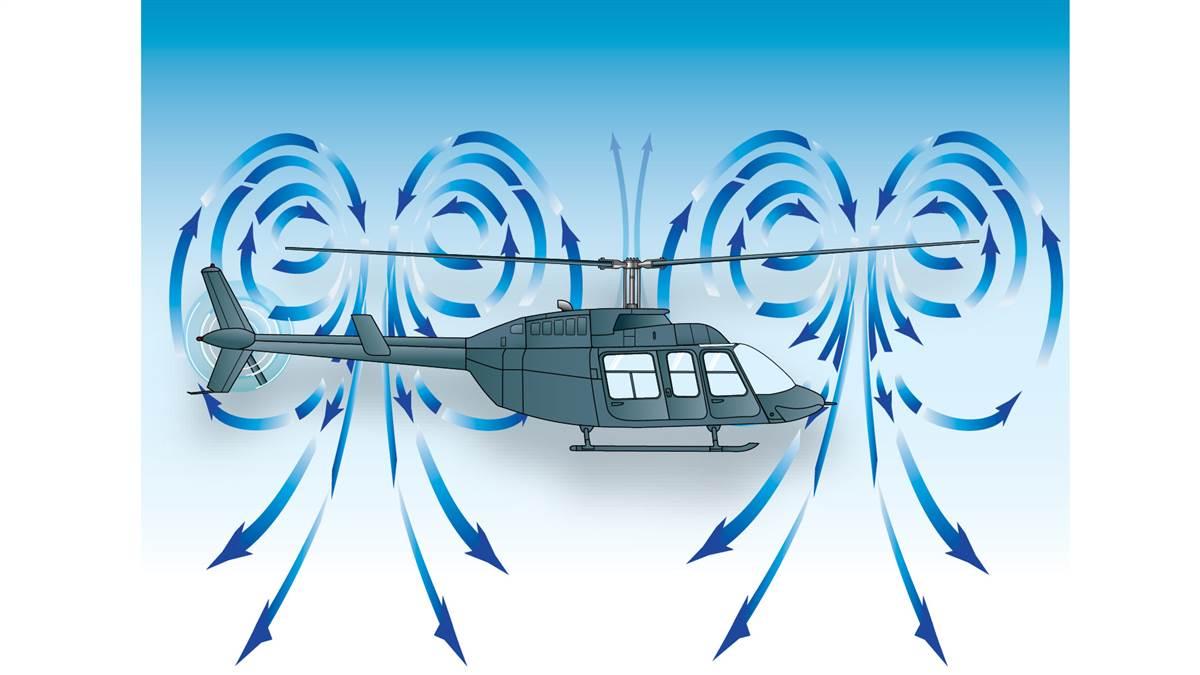 For vortex ring state to develop, the helicopter must be descending at least 300 fpm, the rotor disk must be using at least 20 percent of the available engine power, and the horizontal velocity must be slower than effective translational lift.
Courtesy of FAA

While recognizing the conditions necessary for VRS is important regarding avoidance, a helicopter pilot must quickly recognize when VRS is beginning so as to properly mitigate the hazard with a proper recovery procedure. Those who have had the benefit of actual flight training in VRS will know the helicopter provides feedback through vibration and the flight controls. The aircraft will typically shudder laterally with erratic yaw control, and the flight controls will lag in response to pilot inputs. Those flying helicopters with a mast moment indicator will also note high mast bending. All this is because of the varying angles of attack across each main rotor blade, resulting in an unstable rotor disc loading condition. Not every helicopter operator will conduct flight training in VRS and not every helicopter is even suitable, so some pilots don’t get the benefit of actually experiencing VRS in a training environment. In addition to the feel of the flight controls and the lateral/yaw instability, a pilot can detect the early onset of VRS noting trends with the vertical speed indicator, especially if the aircraft is equipped with an instantaneous vertical speed indicator (IVSI). While early detection is critical in all helicopters, it is especially critical with larger helicopters. A Sikorsky 92 with a gross weight of 27,700 pounds, though having two engines capable of more than 5,000 horsepower, simply will not recover from a negative trend in flight as quickly as a lighter helicopter.

Helicopters are more susceptible to encountering VRS conditions when making downwind approaches, and doing vertical reference work such as long line external load operations.Twenty years ago when flying a MBB BO105 helicopter for an air-medical operation, we commonly trained in recognition and recovery of VRS at 4,000 feet agl. We had an excellent instructor who demonstrated and taught a procedure using right cyclic as a lateral escape from VRS. This caused the right side of the rotor disc to enter clean air escaping the VRS downwash state, resulting in a faster recovery and far less altitude loss than with the forward cyclic method.

The Vuichard Recovery technique, credited to Claude Vuichard of the Swiss Federal Office of Civil Aviation, was developed in the Alps and further refines the recovery procedure of VRS. In a helicopter with a counterclockwise-rotating main rotor, using right cyclic with maximum power and enough left pedal to prevent a yaw rate will result in a fast recovery with minimal altitude loss, generally just 20 to 40 feet. For a clockwise-rotating main rotor this is reversed with left cyclic and right pedal. This technique results in an immediate recovery as soon as the edge of the rotor disc breaks into clean air. I would encourage everyone to watch an excellent video of an Aérospatiale Lama helicopter with a spray rig demonstrating VRS and the Vuichard recovery technique on the Vuichard Recovery Aviation Safety Foundation website (vrasf.org). The U.S. Helicopter Safety Team and Robinson Helicopter are proponents of this recovery technique.

I believe a pilot doesn’t rise to the occasion in an urgent condition, but rather rises to the level of his or her training. Hopefully considering the Vuichard Recovery procedure along with forethought and training will enable a pilot encountering VRS to quickly recover without incident.

Markus Lavenson is a captain in the Sikorsky S–92 and Leonardo Helicopters AW139 flying oil and gas support missions in Alaska and the Gulf of Mexico. 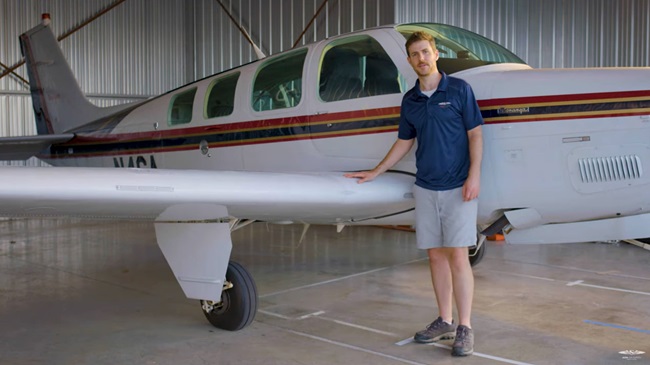 Reality Check: What are the costliest insurance claims?