Get the app Get the app
Get the latest news on coronavirus impacts on general aviation, including what AOPA is doing to protect GA, event cancellations, advice for pilots to protect themselves, and more. Read More
Already a member? Please login below for an enhanced experience. Not a member? Join today
News & Videos Photography at the edge of night

Editor's note: This article was updated January 14 to clarify that an FAA waiver is required for night operations under FAR Part 107. The FAA is developing new rules and requirements that will apply to non-commercial aircraft flown remotely. Interim guidance for recreational pilots is available in this advisory circular.

The setting sun signals the end of the drone-flying portion of the day for most of us, but with the right techniques (and an FAA waiver), there is room for magic in the final minutes of daylight, and beyond. 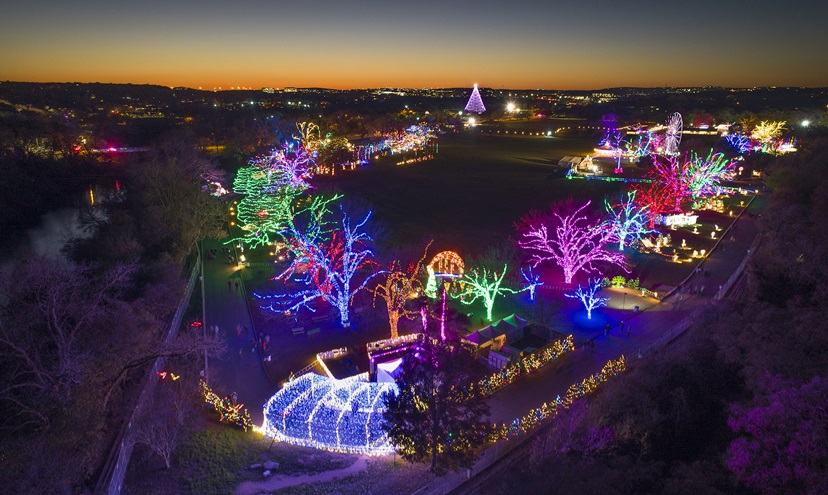 This photo shows the Austin, Texas. Trail of Lights holiday display, with the Zilker Tree in the background, right. The photo was made with the DJI Phantom 4 Pro, about eight minutes past evening civil twilight. It is a two-second exposure at 100 ISO and f4. Photo looks southwest towards the sunset. Photo by Zach Ryall.

The last long, warm rays of the day reveal textures and cast shadows before the light surrenders to clouds and dust, and finally the horizon, to create those beautiful travel-magazine sunsets. Practically speaking, ambient light lingers for many minutes before dark-dark (not a meteorological term) sets in.

Drone forums are awash with one sunset skyline photo after another, often taken during evening civil twilight. All drone pilots should know this phrase well for legal and safety reasons. Just beyond evening civil twilight (which lasts 30 minutes after each sunset) lies a completely different flying environment. An FAA waiver is required to operate under FAR Part 107 after civil twilight ends, and for good reason.

In early December, I set out to photograph a yearly event in Austin, Texas, known as the Trail of Lights. Many cities create similar holiday light extravaganzas, inviting pedestrians, cars, and cyclists to pass through these homages to the light bulb. The Trail is a big draw, as is the nearby 155-foot “Christmas tree” sporting more than 3,300 lights. Twirling beneath this tree until dizzy is a local tradition.

I’ll start with the “secret sauce,” the technical details photographers like to know: The photo below was taken with a one-second exposure by a DJI Phantom 4 Pro at about 200 feet agl, 20 minutes past civil twilight. The aperture was f2.8, and all camera controls were in manual mode for more precise control. At times like this I use the RAW image file format exclusively, capturing as much light and detail as the camera’s sensor can gather and preserving them for further adjustments in Photoshop and Camera Raw. I shoot at ISO 100 or 200 for high image quality and low noise. My shortest exposure that evening was half a second, and the longest was two seconds. (The stabilization provided by the mechanical gimbal, and a little distance from the subject, conspire to preserve sharpness over the course of a long exposure like this.) 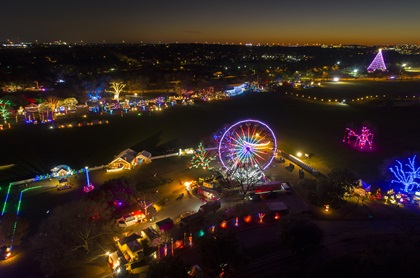 To achieve the desired balance of ambient light, a good sunset, and the light display itself, there is actually a very short window when all the light sources align perfectly. This window frequently butts up against the end of civil twilight. For that reason, I have a daylight operation waiver, allowing deviation from the requirements of FAR 107.29.

Determining the best camera angle and position is the easiest part of many drone aerials. The groundwork and preplanning required before the actual night launch are far more time-consuming, but necessary to ensure safety. First, there’s acquiring the FAR 107.29 waiver, which many of us are accustomed to calling a night waiver. It is one of the most commonly applied-for 107 waivers, and also one of the most frequently denied for lack of specific information provided on applications. The FAA needs specifics as to how a pilot plans to assess and mitigate the risks of the flight. (Hint: Saying things like, “I’m going to be very careful,” doesn’t cut it.)

My waiver (like most, if not all of its kind) requires that I use at least one visual observer (VO). Not just any visual observer but one trained in night illusions and operations. The VO needs to understand aircraft navigation lights, be aware of the tricks our eyes and minds play on us when staring at objects at night, and know my particular aircraft. Additionally, the training must be documented. A test must be taken, passed, and signed by the VO and me. The waiver and accompanying material must be kept on site for every night mission and presented for inspection should I be asked.

While that might strike some as a little over the top, a night flying environment invites risks not encountered on many day operations. During this very flight for the Trail of Lights image, we encountered another unmanned aircraft system doing the same thing. There were also low-flying ducks making their way upriver, gusty winds, and fishing lines dangling from tree limbs on the return-to-home path. My VO was instrumental in the flight, from launch to recovery. He adjusted the light levels of the landing zone as the mission concluded and kept an eye on not just our aircraft, but the other traffic in the vicinity. Since 100 percent of our flight was over water, it was relatively easy to avoid flying over people, even at a popular event.

A night mission often starts as a day shoot does, in front of Google Maps at home. Becoming familiar with the flying environment—including surrounding terrain, obstacles, and sensitive airspace—is all part of choreographing each flight. No night mission should involve just “flying around.” Instead, make a shot list, like any serious photographer would. Review it with your VO so that he or she knows precisely what you are doing. If possible, visit and fly the environment during the day before you attempt it at night. If not, arrive at the launch site with plenty of daylight remaining. Speaking of that launch site, choose one that allows you to be out of the flow of passersby, who will often want to ask what you’re up to.

Once aloft, make sure you and your VO never lose communication (if they are not next to you), and have a plan in case communication is lost. Your VO should never show up at the appointed mission asking, “So what are we trying to do this evening?” The VO should have specific duties assigned in addition to watching the sky during the actual flight. With the proper planning and communication, a night photo mission can easily be up and down in 30 minutes. In our case, that included giving a wide berth to another drone, staying out of the vertical space of a rowing team on the river below, taking stills and video, and recovering the aircraft. The preparation for this half-hour of flying (with one battery changeout) took a couple of hours, including testing new navigation lights (required by the waiver), and briefing the VO.

A parting thought to private pilots who are Part 107 certificated or who wish to be: I frequently draw UAS comparisons to my fixed-wing instrument training and experiences. Becoming night authorized (and competent) with a drone makes me plan as I do when launching my Mooney into 500-foot ceilings. It has helped me apply even more care and planning to flying drones in all environments. Night UAS operations have their own version of cockpit resource management (CRM) and teamwork required when working with a good VO. Making photographs at night is fun and invites creativity. It also rewards attention to a well-known aviation maxim, “Plan the flight and fly the plan.”

Waypoints: This genie won’t go back in the bottle 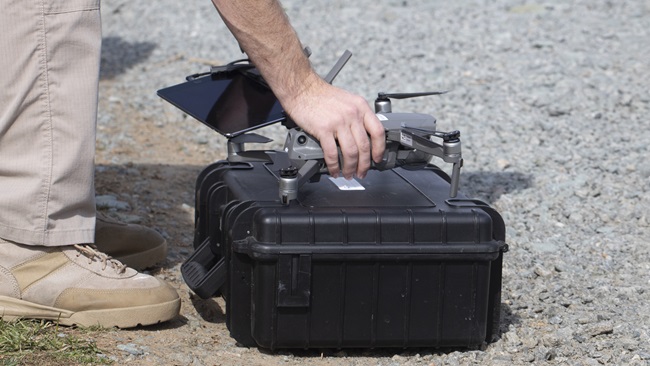