Get the app Get the app
Get the latest news on coronavirus impacts on general aviation, including what AOPA is doing to protect GA, event cancellations, advice for pilots to protect themselves, and more. Read More
Already a member? Please login below for an enhanced experience. Not a member? Join today
News & Videos Training Tip: Give me a 360
Sponsored by Aircraft Spruce

You are flying the base leg, descending and configured for landing, when the control tower calls with an unexpected request. 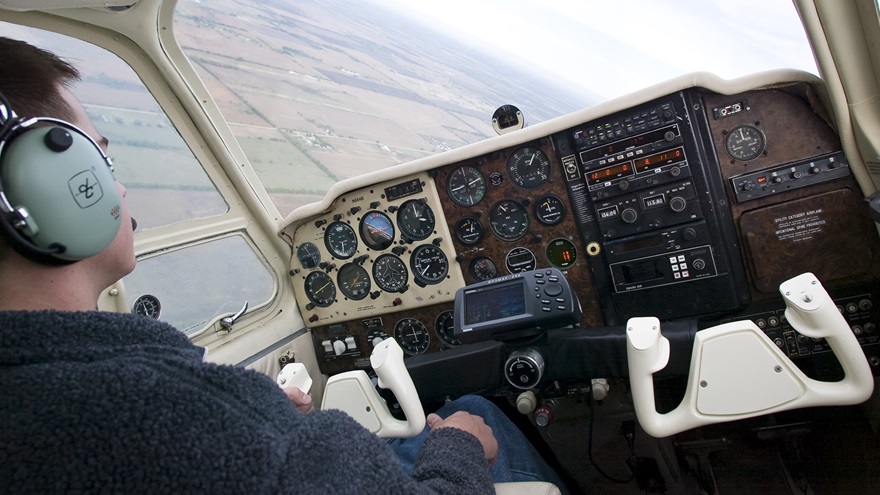 Don't lose focus on flying your own aircraft when working with air traffic controllers to accommodate other aircraft. Photo by Mike Fizer.

A faster aircraft is on a long final approach, but it’s getting tight out there between that aircraft and you in your Cessna 150.

“How about giving us a 360-degree turn and rejoining the base leg once the jet is out of the way?” the controller says.

Not an uncommon scenario in the pattern of a towered airport during peak traffic periods.

Although it may seem to go against the grain of the general caution about avoiding unexpected maneuvers in a traffic pattern, a delaying tactic like a level-altitude, shallow 360-degree turn in the direction requested can save all concerned much time and trouble.

Make no mistake, however: Sudden changes of plans are a distraction waiting to happen. The setup for this one is flight at low airspeed and low altitude. Everyone wants to be helpful, but don’t lose focus on your main task of flying your aircraft.

A private pilot applicant is expected to demonstrate the ability to identify, assess, and mitigate risks associated with traffic patterns.

When the tower asked a Cessna 150 pilot on the base leg to perform a three-sixty to let an overtaking aircraft land, things quickly unraveled. After performing the maneuver, the pilot requested to re-enter on the downwind leg, not the base, and the request was approved.

But distraction had set in, which the pilot realized only after another arriving aircraft’s appearance prompted more maneuvering for spacing.

“I joined base and turned on final when I noticed I had full flaps, a low power setting, carb heat and was below glide path,” the pilot wrote in a filing with the Aviation Safety Reporting System, owning up to having been more focused on “trying to accommodate them than I was to flying the airplane.”

(If you needed a good reason to head out to your practice area to work on refining your slow-flight skills and power-off stall recognition and recovery technique, here it is—but for safety, do it a few thousand feet above traffic pattern altitude.)

Being prepared to comply promptly with air traffic control’s instructions is always important, and it pays to expect surprises whenever the traffic pattern has a complicated mix of aircraft.

But if ATC’s instructions make you uneasy, consider requesting an alternative way to cooperate. Faced with a similar scenario in the future, the pilot wrote, “I will request vectors out of the traffic pattern so I can rejoin and make a stabilized approach.”