Get the app Get the app
AOPA will be closed July 4th, in observance of the Independence Day holiday. We will reopen at 8:30 am ET on Tuesday, July 5.
News & Media Transition training: From Air Force to airlines

Although Chris Kreske never intended to start a flight school, he has carved out a niche training military pilots for the FAA’s airline transport pilot certificate, which his customers need to pursue airline or certain other commercial flying opportunities after leaving the service. His efforts earned him recognition as the best flight instructor nationwide in AOPA’s 2019 Flight Training Experience Awards (see “The Accidental Instructor”). 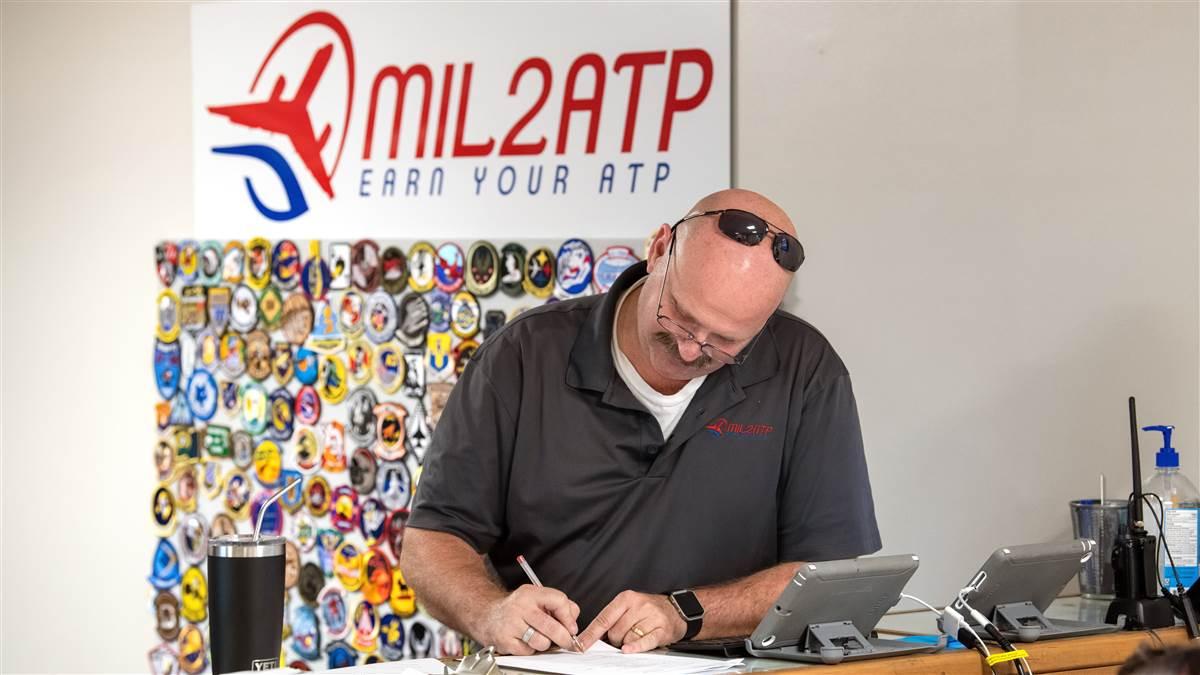 Kreske was exposed to aviation at an early age. “My dad introduced me to Part 91 flying when I was 6 years old, and I still vividly remember him flying us over our house and going into about 30 degrees of bank. That’s just etched in my mind.” Twelve years later, patriotism and his love of flying led him to join the U.S. Air Force, where he first served as a C–141 heavy airlift mechanic and then a flying crew chief. After earning a four-year degree, Kreske completed the Air Force’s officer training school and pilot training.

“I absolutely loved everything about learning to fly fighter trainers,” said Kreske, whose first assignment was as a T–38 instructor pilot. In 2003 he was assigned to Seymour Johnson Air Force Base in Goldsboro, North Carolina, where he spent seven years flying the two-seat F–15E Strike Eagle—first in training, then an operational squadron, and finally as an instructor. “My wife and kids had fallen in love with North Carolina,” he added.

After flying in an exchange program with the Argentine air force and then serving as an F–15E pilot and instructor at Royal Air Force Lakenheath, a British base in Suffolk, England, he returned to Seymour for a final tour as an F–15E instructor. “At the end of that assignment I was an old guy playing a young man’s game,” said Kreske, who retired with 25 years of service.

Like many retiring Air Force pilots, he took an airline job. “My intention was not to start a flight school,” he said. “This really started as a labor of love. I decided that I wanted to teach my little girls how to fly, so I bought an airplane. To pay for the airplane, I decided I would help some of my Strike Eagle brethren with their airline transport pilot ratings, and everything was borne out of that. It became so popular so quickly that we bought another airplane, so we’d have a spare, because guys were traveling from around the world to do our course.” Kreske didn’t want a broken airplane to delay anyone’s training, but the second airplane was quickly booked, too—so he bought another spare. “I think we’re up to six Seneca IIs now. It’s been a lot of fun to watch the flight school grow, and continually add new employees out of necessity.”

MIL2ATP, the school he didn’t intend to start, is located at Wayne Executive Jetport Airport in Goldsboro, North Carolina, a short distance from the sprawling Seymour Johnson Air Force Base.

What’s the trick to bringing a military pilot through a civilian ATP?

“The process is a mental transition from Air Force rules to federal aviation rules. While military rules are derived from FARs, they are absolutely different,” he said. Most military pilots have logged considerable turbine flight time, but have no Part 61 general aviation experience—and many have never flown a piston aircraft, he added.

The process begins with the ATP CTP, the FAA’s ATP Certification Training Program, now required for ATP applicants with an airplane category, multiengine class rating or an ATP issued concurrently with a type rating. Kreske said the week-long, simulator-based program—conducted at Pan Am International Flight Academy or other simulator training centers with which he has partnered—provides a good introduction to Part 121 flying and operations. The ATP CTP is a prerequisite for the ATP knowledge test; with that done, Kreske’s crew goes to work. His course condenses the Part 91 regulations, combines those operating rules with Part 121, then introduces advisory circulars, FAA recommendations, and best practices.

“When people finish our course, they’re a much more rounded pilot,” he said—and ready for the ATP checkride. Kreske’s course doesn’t always take a full week, but it’s scheduled for Monday through Saturday. “During the summer we can’t fly in the middle of the day in North Carolina, because it’s a special kind of hot,” he laughed.

“For a C–5 pilot who is used to sitting two and a half stories high, telling him to wait to flare until they’re three feet off the ground can be problematic.” —Chris Kreske, Flight Training Experience Award winnerJust like when handing a private pilot applicant his or her certificate—Kreske is an examiner, as well—he tells his ATP students their certificate is a license to learn. Small classes, typically six to eight, assure individual attention.

And the ATP is not attrition-based, like so many military courses, added Tonya Hansen, MIL2ATP’s assistant chief instructor. “It’s a team sport. I want to see you get your certificate.” A KC–135 pilot, Hansen separated from the Air Force in June 2019. “It turns out I liked flying, and missed it,” she said.

IACRA, the FAA’s Integrated Airman Certification and Rating Application, is the first challenge for many military aviators—who are not required to maintain logbooks but do receive a flight history report or summary. “The Air Force doesn’t care about cross-country time, or night time,” Kreske explained, although it does count combat flight time, and hours flown using night vision goggles. “All of the services use something slightly different.” The FAA accepts MIL2ATP’s standardized conversion procedures for converting time, although many applicants will have to go through a similar exercise to summarize their qualifications for a specific airline.

And there can be challenges transitioning these skilled military aviators into a piston twin. “Negative transfer is the biggest problem that all our students will face,” he said, and it helps that all of MIL2ATP’s instructors have a military background. “We can certainly predict and relate to the problems that our student pilots will have. We always try to equate what they’re doing with something they’ve seen before.”

What kind of negative transfer? “For a C–5 pilot who is used to sitting two and a half stories high, telling him to wait to flare until they’re three feet off the ground can be problematic.” An instructor demonstration usually is required here, Kreske added.

“Most fighter pilots have never really had to worry about crosswind controls. So if there’s a crosswind, it can be a challenge.” He said F–16 and Harrier pilots have never really experienced non-centerline thrust, so rudder control can be a serious challenge. And Navy F/A–18 pilots don’t have an ILS receiver in their airplane. “The last time they flew an ILS was in pilot training. They’re used to flying the ball on the boat, or getting [a precision approach radar approach].

“A lot of the challenges we face are airframe specific. We’ve been able to build a reasonably good course just based off our understanding of what a student’s limitations will be,” Kreske continued. “We really bond with these guys. We’re a mom-and-pop operation.” Literally—his wife runs the office.

Although he started the business primarily to serve Air Force pilots, 30 to 40 percent are Navy aviators, most of them coming from the West Coast. More than half of MIL2ATP’s clients are within a year of retiring from the service. “Their plan is to do this course and then begin applying to airlines immediately,” he said. Ten to 15 percent are retired from the military; “they’re staring at unemployment.” Still others take the course so they have a Plan B, because they don’t know what’s next. “Every military officer is one assignment away from separating [from the service], only a lot of them don’t know that.”

Many of the transitioning students are not currently flying; for example, because they’ve transitioned to a staff job. “Being non-current presents its own set of challenges. But the good news is they have several challenges, and thousands of hours of experience, to fall back on.”

Training doesn’t stop with the flying. The school offers interview prep through a partner, and application reviews as well. “Military pilots speak a specialized language that a 22-year-old HR specialist might not understand,” he explained.

“We try to be really, really good at one thing, and that’s the air transport rating,” Kreske said, but it’s not the only course MIL2ATP teaches. It offers pretty much any fixed-wing training program. “A lot of our private pilot students are weapon systems officers—Strike Eagle back-seaters who would like to be competitive for an Air Force pilot selection board. Hands down, they’re the easiest people to teach.” They have great motivation and good airmanship, Kreske said. There’s also a lot of interest from high-school students. “We are trying to build a more robust single-engine program, and are considering partnership with a university.”

His advice to aspiring pilots? “In any career, you have to be passionate about what you do. But don’t pass up an opportunity to fly as many airplanes as you can. Get as many type ratings as you can.”

A version of this story ran in the January/February 2020 issue of Flight Training magazine. 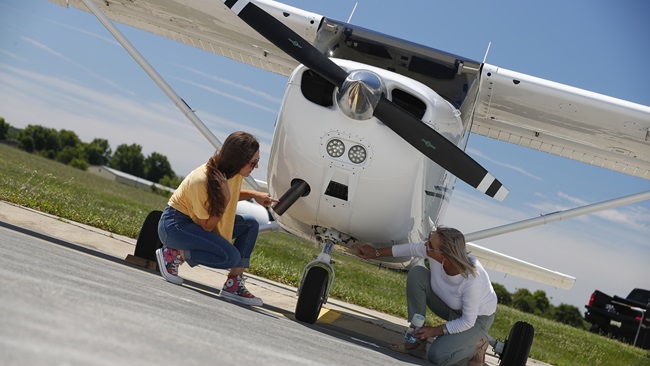 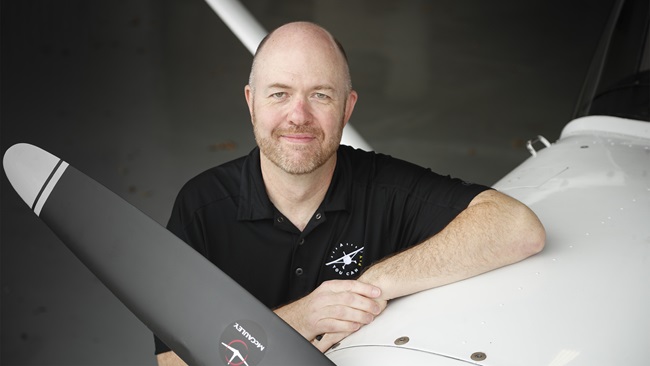 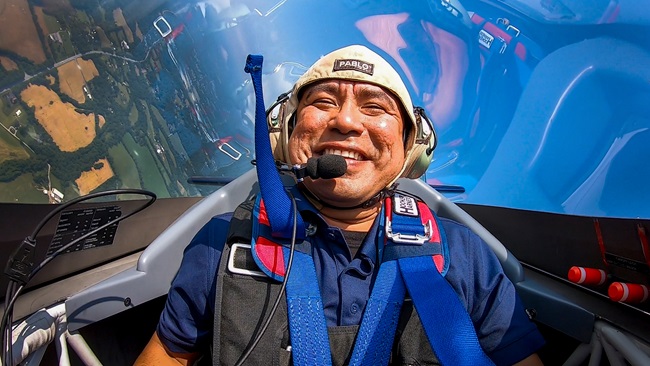