Get the app Get the app
AOPA will be closed on Monday, January 2020, in observance of Martin Luther King Jr. Day.
Already a member? Please login below for an enhanced experience. Not a member? Join today
News & Videos First look: Thunderbird for a day

Taking the flight of a lifetime

An invisible elephant sat on my chest. An anaconda squeezed my legs. On a brilliant, sun-splashed morning, these foreign and seemingly irresistible forces were creating my own personal eclipse, and its looming shadow threatened to make my happy little place in the back seat of Thunderbird 8, an F–16D, fade into oblivion. 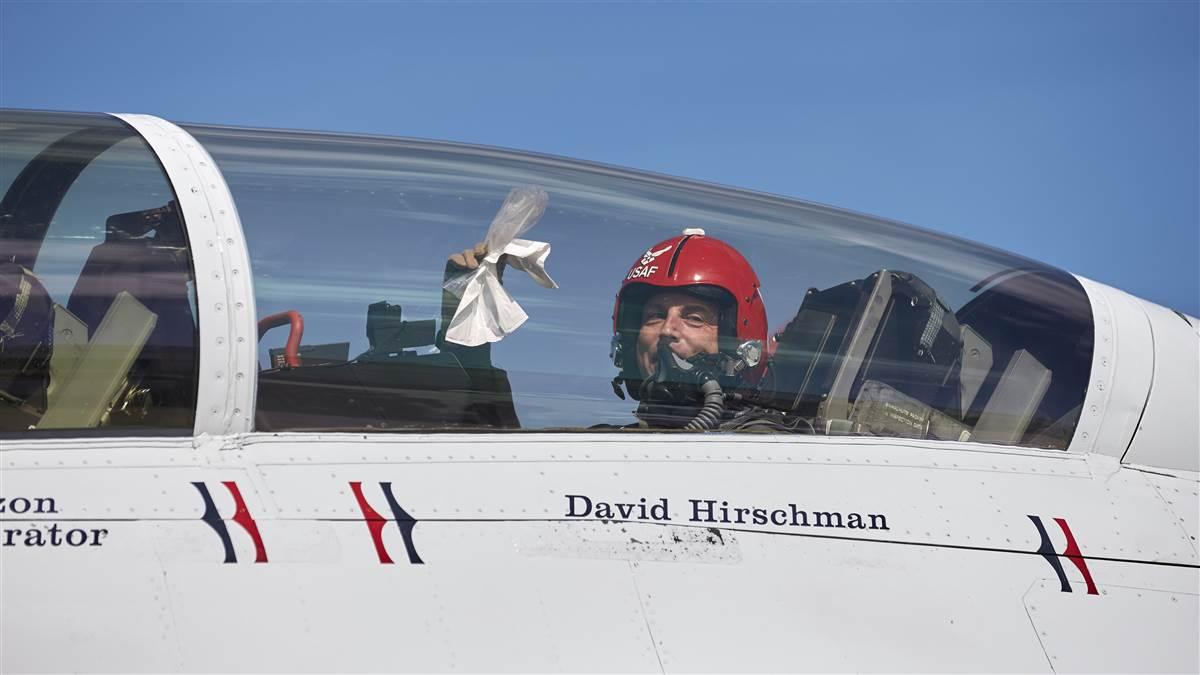 Hirschman waves his empty airsickness bag at the triumphant conclusion of his flight.
Photography by MIke Fizer 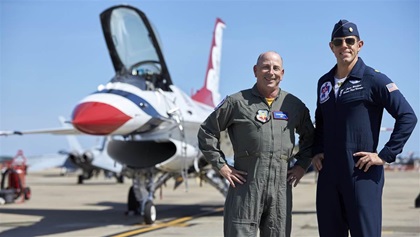 The vibrant colors of the North Carolina coast slipped to monochromatic gray; my field of view constricted to a knothole. Even the Darth Vaderesque sound of my own labored breathing became distant. A thought popped into my blood-starved brain, and it was something that would have been obvious long ago to anyone: Namely, taunting a U.S. Air Force Thunderbird pilot right before he takes you flying is a deeply regrettable strategy.

Maj. Jason Markzon, a veteran fighter pilot who flies Thunderbird 8, seemed to take my baiting in stride. He said nothing, for example, about my bright yellow U.S. Navy F/A–18 Hornet T-shirt (a hand-me-down from my younger brother Harry) or respond to my gratuitous praise of the rival Blue Angels. He just smiled a dimply grin knowing exactly how he’d get even.

I let him know my ulterior motive for egging him on was my sincere hope that doing so would convince him to go “off script” during our flight and show me as much of the F–16’s performance as I could physically stand. As a civilian general aviation pilot, this flight was a dream come true. This was the only time I’d ever be in an F–16, and I didn’t want to hold back.

When we arrived at the Naval Air Station Oceana in Norfolk, Virginia, I saw a line of spotless Thunderbird F–16s on the flight line, and met with team members for a standard series of briefings. Lt. Col. Noel Colls, a physician, talked about the importance of staying hydrated, practicing the G-strain maneuvers, and airsickness.

Things started getting real when Staff Sgt. Kyle Boddie fitted me with a G-suit, helmet, oxygen mask, and flight suit, and Staff Sgt. Chris Tidline talked about the ejection seats.

Markzon showed up at the appointed time and talked about the flight itself. It would start with an “unrestricted” climb from the runway straight up to 15,000 feet.

“We’ll accelerate in afterburner to about 400 knots at the end of the runway,” he said. “We’ll pull about five Gs to the vertical. Then, after we level off, it’ll be about six minutes to the practice area where the fun really starts.”

After a short taxi, we lined up with Runway 5 Right and were cleared for takeoff. The runway is 12,000 feet long, but the F–16 didn’t use much of it. After a ground roll of about 2,000 feet, the airplane was airborne, and Markzon held it in level flight at about 50 feet as the acceleration became a blur. At the end of the runway, he stood the jet on its tail with a firm tug on the sidestick controller and the long runway shrunk behind us.

We flew south past Kitty Hawk, First Flight Airport, and the Wright Brothers Memorial to a military Restricted Area (R-5314) where Markzon seemed intent on diminishing my already short stature with level “warm up” turns of 5 Gs in one direction and 7 in the other.

Despite the sudden and sustained increase in induced drag, however, the airspeed indicator barely budged. Markzon would start a turn at 450 KIAS and end it at roughly the same speed without changing the power setting.

At about 450 KIAS at an altitude of 5,000 feet, Markzon pulled up into a series of vertical rolls, then leveled off at about 15,000 feet. Frankly, I have no idea how many rolls he did, and he treated them as something of an instrument maneuver since he focused on the HUD and its flight path marker. I found the vertical rolls particularly disorienting because the reclined seat makes it feel as though the airplane is beyond vertical when the nose is straight up. Markzon was merciful in the sustained, high-G turn. Even though the airplane can hold maximum Gs for multiple turns, he subjected us to 9 Gs only momentarily during a 180-degree, level turn. Even with the G-suit squeezing my legs like a rogue blood pressure cuff, I could feel my senses fading. Blood pooled in my arms just above the elbows, and they felt almost too heavy to move.

At the conclusion of the maneuver, I noted that the analog G meter in the rear cockpit only reached 8.5 Gs, not the full 9. But Markzon said the more accurate digital one showed 9.1 Gs. 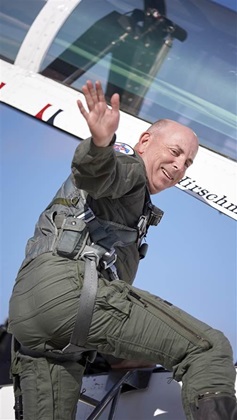 Markzon asked me if I wanted to fly, and that was something I couldn’t possibly turn down. A barrel roll, loop, point roll, and a series of aileron rolls gave an immediate sense of airplane’s unique handling and its pioneering fly-by-wire system. The sidestick moves slightly but there’s no tactile feedback from the stick itself. It feels exactly the same regardless of the airplane’s speed or its flight attitude. You use the stick to tell the airplane what you want it to do, and it responds instantly, but the communication is a one-way street. The stick doesn’t tell the pilot anything. Only the airframe and instruments do that. Also, there’s almost no correlation between the airplane’s attitude and its airspeed. It can go really fast straight up, and it can be pointed at the ground going relatively slow. To a piston pilot like me, that’s unnatural.

After one glorious, enlightening, exhausting hour, we returned to the airport where Markzon flew an overhead break starting at about 400 KIAS, lowered the landing gear and smoothly decelerated to about 150 KIAS on final. Markzon let the airplane cool down after pulling into its tie-down spot, and the Thunderbird ground crew quickly surrounded us.

I triumphantly held up a pair of empty airsickness bags that the crew chief had strapped to my leg at the beginning of the flight, and he smiled, gave an enthusiastic thumbs up, and pantomimed wiping sweat from his brow. No one would have to clean up the cockpit with a mop and bucket. I thanked Markson for the flight of a lifetime and the ground crew for their patriotism, professionalism, humor, and friendliness.

Afterward, I couldn’t wait to call my brother and let him know that his musty old VFA-151 Hornet T-shirt—one that he had worn on dozens of demanding flights around the world—had had made its way into a U.S. military fighter one more time. 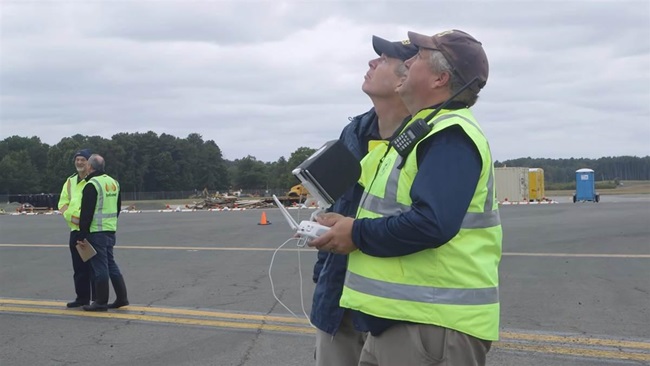 How an NTSB drone documented a B–17 crash 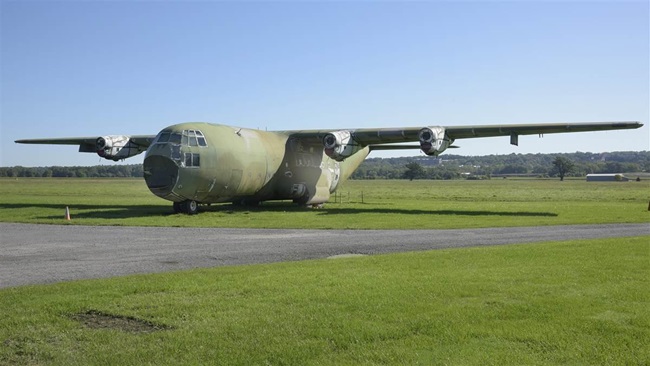 New details of B–17 crash emerge