Get the app Get the app
Get the latest news on coronavirus impacts on general aviation, including what AOPA is doing to protect GA, event cancellations, advice for pilots to protect themselves, and more. Read More
Already a member? Please login below for an enhanced experience. Not a member? Join today
News & Videos Never again: Sputtering into Vegas

The temptation of ‘almost there’

Fall is a wonderful time  to fly in the Rocky Mountains. The summer thunderstorms have moved on, the air is clear and cool, and aspen trees splash electric gold across the landscape. My business partner August and I were scheduled to attend an engineering conference in Las Vegas, so we planned on flying there from our town of Gunnison, Colorado, in my Cessna 182 RG Turbo. 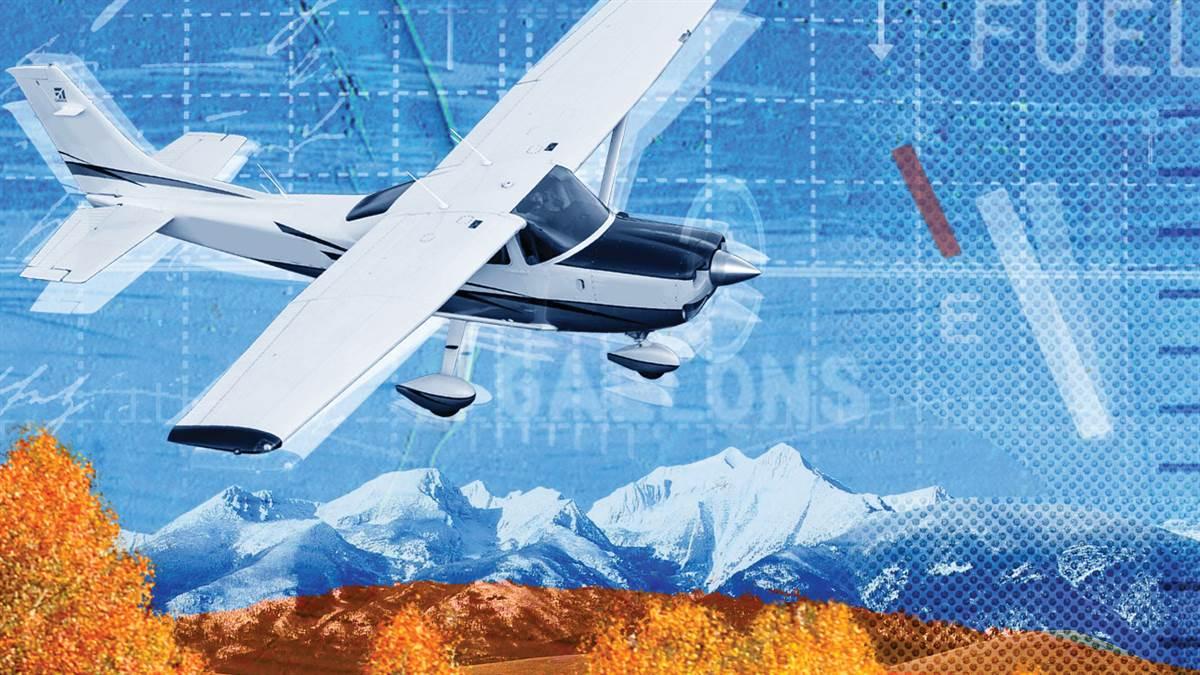 Sierra Fox was a stock 182—a strong and steady bird. At the time of this flight in September 2007, it had conventional analog steam gauges, and the pride of the nav/com stack was a King 89B GPS with a tiny orange dot-matrix screen. I had more than 400 hours total time, and although I was VFR-only, I had more than 300 hours of flying in and around the mountains and canyons of Colorado, Utah, and Nevada, so this trip was well within my comfort zone. I plotted a straight-line course to Henderson Executive (HND), but figured that we might wander a bit to get a good view of the Grand Canyon, only a dozen or so miles off-route to the south.

Our standard preflight included fuel to the “bottom of the necks” by the FBO line crew, which gave us about 75 gallons usable based on our paint-stirrer dipstick. Flight planning in those pre-iPad days involved the plotter, sectionals, tape, and calculator. The direct route added up to about 425 nautical miles, which would require 2 hours 45 minutes at 155 knots, and some 47 gallons of avgas. (Although the pilot’s operating handbook said the airplane should cruise at about 15 gph, a few years of fill-ups had taught me that it actually burned more than 17.) This all added up to nearly two hours of extra fuel, plenty to handle some scenic diversion and a bit of wind on the nose.

We stowed our bags and were soon on our way up and over western Colorado. Once past the Cones VOR, the terrain falls away to the sculpted canyon country of the Navajo nation. I could tell from our GPS ground speed that we had a headwind—not unusual for that flight direction. I headed for Page, Arizona, where Glen Canyon Dam marks the start of the Grand Canyon. We skirted just north of the special-use airspace that covers the most noise-sensitive parts of the national park. For about 20 minutes, we tracked along the north rim of the canyon, making sweeping turns to take in the amazing scenery. Eventually the canyon opened out toward Lake Mead and we resumed our direct course to Henderson.

Our descent path actually did give us another option. Boulder City airport, 13 nm east of Henderson, was about 5 minutes closer, but a bit off line. I weighed the option of landing, fueling, and then taking off for a 7-minute flight to our destination. It didn’t seem like things were quite that dire, so I soldiered on, although I kept a beady eye on BVU as it passed by on our left.

Almost there. I checked in with Henderson Tower and got my instruction to enter a long left base for 17 Right. Coming up to the turn from base to final, we were still uncomfortably distant from the numbers. I had not informed tower of our fuel situation, which still did not seem to qualify as an emergency. As I entered the bank for final, the Lycoming coughed and sputtered, a sound I had never heard in any plane while airborne—and hope to never hear again. The engine stuttered through the turn, then as I leveled out for final it came back to life. A minute later we were squeaking the tires onto pavement and taxiing for the FBO and a long drink of 100LL. August and I exchanged relieved looks and I admitted that I had obviously cut it too close.

When we finally refueled, the airplane took on nearly 70 gallons to our usual fill level. Lessons learned: 1. Bottom of the necks is less than 75 gallons of usable—dipsticks are sketchy. 2. Top off for a long flight. I could have put another 45 minutes’ worth in those tanks when we departed, with no worries about weight. 3. Headwinds and off-course diversions can add up to more fuel use than you think. 4. Banking the airplane can starve the engine when things are getting bony. 5. Better to spend an extra half-hour for a fuel stop than run dry, even if it’s spitting distance from your final destination. 6. Apply caution in inverse proportion to the accuracy of your fuel measurement devices.

Ten years and 300 flying hours later, I applied these lessons on a routine flight from Los Angeles to San Luis Obispo, our new home, in a Mooney M20K, our new ride. This time it was high fuel prices in Burbank and a 25-knot headwind that had me running low. Cruising along at 6,500 feet, I did not desire an intermediate stop, especially with gusty crosswinds at Santa Ynez below me. But that little voice told me to cut the power, put it down, and fill it up, which is what I did. So should you.AOPA

Dave Houghton is an instrument-rated commercial pilot living in California.