Get the app Get the app
Already a member? Please login below for an enhanced experience. Not a member? Join today
We will be performing maintenance on our systems Sunday 9/19 from 12am to 6am ET. During this time, you may experience intermittent service outages. We appreciate your patience.
News & Media Super-mid step-up

Up front with the Praetor 600

The origin and definition of the term “super-midsize” isn’t certain, but in the bizjet world it’s generally come to mean a twin-turbofan with an airstair door, flat floor, seating for up to 12, and a maximum range hovering around 3,500-plus nautical miles.

It’s the name given to high-level magistrates in the Roman Empire. In their official capacity, Praetors served as army commanders or judges.

This niche has been popular since its debut in the 1990s, with all the major turbine manufacturers jostling for a share of the market. Super-midsize airplanes like Bombardier’s Challenger 300 and 350; Textron’s Citations Sovereign, X, Latitude, and now, Longitude; Gulfstream’s G280; and Dassault’s Falcon 900 and 2000 models continue to offer a variety of designs to those not quite ready to make the leap up to a globe-striding mega-jet.

In 2014 Embraer joined the pack with its Legacy 450 and 500. The idea was to beat the competition with a combination of Rockwell Collins’ latest ProLine Fusion cockpit, strong interior design elements, and a big dose of DNA from Embraer’s commercial aircraft division—in the form of fly-by-wire (FBW) flight controls. Fly-by-wire has its disbelievers but has gained acceptance in stages, with more airplanes adopting partial FBW systems. The Legacy 450 and 500 are among the very few business jets to have full FBW flight control.

At the 2018 National Business Aviation Association annual convention, Embraer announced upgrades to the Legacy 450 and 500, renaming the airplanes the Praetor 500 and Praetor 600, respectively. Bowing to the irresistible urge for more speed and range, the Praetor 600’s Honeywell HTF7500-HTF7500E engines were given a boost of 492 pounds of thrust per side, and two ventral fuel tanks were added. The forward ventral tank can hold 1,433 pounds/213 gallons, the aft tank has a 1,653-pound/246-gallon capacity. The addition of new winglets and their associated structures gives the Praetor 600 a wingspan four feet longer than its Legacy 500 predecessor.

Add up those attributes, throw in big hikes in maximum takeoff and zero fuel weights, and you’ve got an airplane with a full-fuel payload of 2,194 pounds that’s capable of flying 4,018 nautical miles at long-range cruise power, or flying shorter distances at high-speed cruise power settings of Mach 0.82. The Legacy 500’s maximum range is 3,600 nm, so the Praetor 600 has that beat by at least 400 nm. It’s deeper into super-midsize territory.

The Praetor 500 also has added fuel capacity and increased weights over its Legacy 450 predecessor, but for this story we’ll focus on the Praetor 600. An opportunity to fly the 600 led me to a visit to Embraer’s Melbourne, Florida, headquarters. There, I met with demonstration pilots Colby Wilson and Pierce Brooks. They shadowed my moves and provided quality instruction. Today’s mission: fly from Melbourne to Las Vegas, with a stop for sustainable jet fuel at the Salina Regional Airport in Kansas. In Las Vegas, the Praetor 600 we were flying would be on the 2019 NBAA convention’s static display line.

At first glance, “our” Praetor 600 looks identical to a Legacy 500—until you see what looks like a skeg or skid plate on the fuselage’s belly. It’s there to protect the ventral fuel tanks from damage in case of a gear-up landing, and it’s an easy clue for plane spotters.

To pilots, there’s little practical difference between a Praetor 600 and its predecessor. That’s because they share the same cockpit layout and ProLine Fusion avionics suite. Once you’ve entered the cockpit and fired up the APU (auxiliary power unit—another big-jet feature), the procedures for initializing the flight are the same: enter the wind, temperature, and active runway conditions on the departure page, then the route; and then the anticipated arrival and approach procedures for the destination. Fuel quantities are automatically sent to the Fusion, and after entering the information on passenger weights and seating locations, the Fusion flight management system (FMS) automatically calculates the ship’s weight and balance data—and posts it on a page within the VNAV Thrust category, complete with a graph showing all the relevant weights and their positions in the envelope. Takeoff V-speeds, too. There’s never a need to crack open a manual. The Fusion does this task, and many others, automatically and in real time.

That VNAV Thrust page becomes central in programming FMS-driven flight profiles, which can be preset even before you take off. For the departure from Melbourne International’s Runway 9L, we plugged in a climb at 200 knots once the airplane reached 3,000 feet or 4 nautical miles from the runway. Then a climb at 250 knots until reaching 10,000 feet, followed by a further climb at 280 knots (and Mach 0.76 once past Flight Level 270) until reaching our cruise altitude of FL450. Cruise presets were Mach 0.80; descent would be made at Mach 0.78 until FL280, then at a three-degree vertical path angle until reaching 10,000 feet, when speed would once again be set at 250 knots.

For the arrivals at Salina and Las Vegas’ Henderson Field I selected a familiar progression of airspeeds. Once 18 nm from the destinations, the autothrottles/gear down and flaps 2 prior to the final approach fix, then 130 knots and flaps full. The FMS, based on our weight, weather, and configuration, calculated our VREF as being 116 knots. With a click on the Send button, all those commands were sent to the FMS—well before we took off.

Speaking of takeoffs, they have their own automated modes, with the main one being the autothrottles. After lining up on the centerline, the drill is to check takeoff configuration (press a button and a voice says “Takeoff OK,” if it’s so), hold the brakes, set the autobrakes to RTO (rejected takeoff, for maximum braking), arm the autothrottles, bring the power levers up halfway, and wait for a moment. The autothrottles will take over and down the runway we go. After blowing past V1 and VR in seconds, it’s positive rate/gear up/flaps zero, and we take off into a 3,000-foot overcast, engaging the autopilot at 400 feet agl, per standard procedure. After rotating the flight level change (FLCH) knob’s collar to the FMS position, Wilson and I monitored the goings-on while waiting for the Fusion to level us off at FL450. From now on, until final approach, “George” was going to do the flying, with the autothrottles adjusting our airspeed in each phase of flight. You can still hand-fly it, but standard procedure is to use the automation.

We’d climbed up through tropical storm Nestor’s bumpy clouds, clearing their tops somewhere near Jacksonville. This raises a point about the FBW controls. Although the Praetor 600 retains the structural components of the Legacy 500, its maximum weights range up to 4,000 pounds heavier. The FBW software adjusts flight control forces and stability parameters to compensate for the greater weight.

After two hours, 50 minutes, we are setting up for the landing at Salina. At one point I drift past the final approach course and correct by steering to keep the PFD’s magenta flight director cue inside the white, circular flight path marker, something that Wilson calls “putting the jelly in the doughnut.” Meanwhile, the autothrottles are still engaged, having made power reductions to meet the familiar 180-160-140-130-knot arrival progression. I didn’t need to this time, but if you feel the need to trim out any pitch forces on final, the touch control steering (TCS) will let you. With flaps down, gear down, and autopilot off, the FBW logic will let you trim if you press the TCS button on the sidestick. Press it, and your current stick force will trim out.

Now I’m hand-flying at the 116-knot VREF, waiting for the FMS’ voice to count down to the 30-foot call, at which time the autothrottles go to idle. Then it’s an ever-so-slight flare and a decent touchdown. Getting the picture right is easy, since the view down the nose gives you a great sense of the airplane’s relationship to the runway.

After taking on 800 gallons of ecologically friendly sustainable aviation fuel (SAF) during our quick turn, it was time to launch on the next leg—to Henderson, and the NBAA convention. Brooks showed me more features of the VNAV Thrust page along the way, such as speed profile, which allows you to use default or user-defined cruise speeds and then see your optimum cruise altitude given the conditions at hand. And the required time of arrival (RTA) page, which figures out if you can reach a certain fix at the time ATC requests it, then gives you the speed you’ll need to make it in time.

Two hours, 31 minutes later, I’m flying down final on Henderson’s RNAV(GPS)-B approach and negotiating a vertical path with a whopping 6.44-degree descent angle to runway 35R. Why so steep? There’s a 3,359-foot-high hill next to the final approach fix. Here’s where autothrottles make sense: No matter what your descent angle and rate, they’ll adjust power to maintain your selected airspeed. On short final, the automated voice does the countdown: “minimums”…“100”…“50”…“30”…and power is chopped, followed by the flare and touchdown.

After shutting down in our parking spot, I left the cockpit and took a good look at the interior. I hadn’t visited it during the entire trip. It was Embraer’s latest Bossa Nova interior, a $750,000 option, complete with textured leather seats. Somehow it evoked both traditional and modern themes, but I didn’t have time to dwell on interiors right then. For now, I’ll just make my log entries—five hours, 21 minutes—and look forward to many more flights like these.

AOPA Finance estimates a monthly payment of $95,000 with 20 percent down, fixed interest, and a five-year balloon. 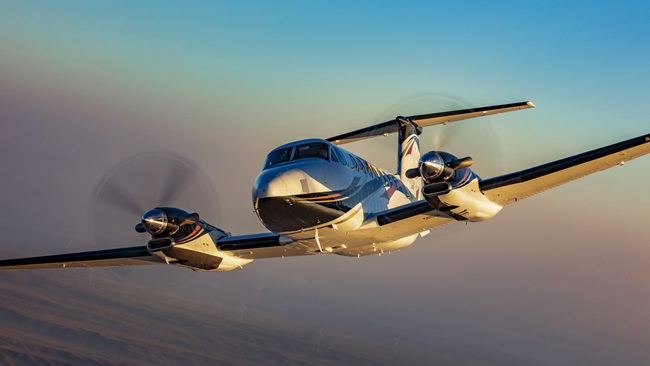