Emily Howell Warner, a National Aviation Hall of Fame inductee and the first woman pilot hired by a U.S. airline, died July 3 in Littleton, Colorado. She was 80.

Warner, a Denver native, trained as a flight attendant all the while believing that the flight deck was where she actually belonged. She told The Denver Post on the occasion of her induction into the National Aviation Hall of Fame in 2014 that she was 18 years old when she took her first flight in an airplane. She booked that flight to see what flying was like, and was invited to check out the view from the cockpit.

One of the pilots on that flight “overheard her excited chatter in the cabin and encouraged her to take flying lessons.”

Warner was a certificated flight instructor by the time she turned 21, teaching future airline pilots, and was a designated pilot examiner by 1967.

“The fact that less qualified male students she was instructing were being hired by the airlines was not lost on her,” her National Aviation Hall of Fame biography notes. 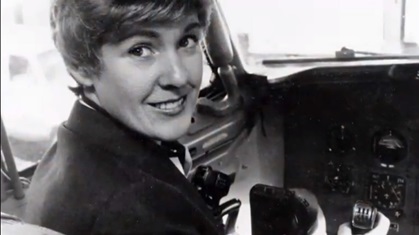 The door did not open easily. Warner tried to land an airline job for years, and, in 1973, she was passed over by Frontier Airlines and marched into the office and got an interview with the company’s vice president of flight operations, the biography notes. Most pilots were not required to prove their skills in a simulator checkride, but Frontier wanted Warner to show her stuff in a Convair 580 simulator, “one that even males found a challenge to manage. Successfully passing the grueling test, and much scrutiny, Frontier at long last offered her a job.”

Warner began as a first officer and was promoted to captain in 1976, earning the distinction of the first woman to hold that position at any airline. Her career would eventually include many flying jobs and more than 21,000 hours logged, The Denver Post noted in a July 9 obituary.

Tributes were posted as word of Warner’s death spread. The International Society of Women Airline Pilots posted the news on Twitter July 4: “We are saddened to announce the passing of one of our charter members, Emily Howell Warner. She was an industry trail blazer, and helped prepare a path for the rest of us to follow. She will truly be missed.”

The Colorado Department of Transportation, Division of Aeronautics, posted a video tribute of its own,mourning the loss of “a true aviation pioneer.”

In the video, Brian Richardson of the Colorado Aviation Historical Society noted Warner was also the first female DPE in the country’s history.

“She opened the door, literally, for women, in professional aviation in this country,” Richardson said. “She was the pioneer, that Colorado pioneer spirit you talk about. She was the first.”