It’s been nearly 30 years since the passage of the Americans with Disabilities Act (ADA), and retired Sen. Tom Harkin (D-Iowa) celebrated his landmark bill with “the most fun” event in his weekend of celebrations. He flew with Jessica Cox, the first certificated pilot without arms, in her Ercoupe at AOPA headquarters in Frederick, Maryland.

“I’ve been in Washington and doing events, but this day has been the best,” Harkin said after he noted that Cox “greased” the landing at Frederick Municipal Airport. “Her first landing was so-so, but then she went back to do it again—with all of these cameras rolling—and it was just perfect, she greased it. It was perfect.”

Cox earned her sport pilot certificate in 2008. She is the first pilot without arms to earn a certificate—she uses her feet to fly an Ercoupe without rudder pedals under sport pilot privileges. A motivational speaker, the Tucson-based Cox uses the moniker “Rightfooted,” which is also the name of a movie she helped produce in 2014. She was born in 1983 without arms and uses her feet and toes like arms and fingers. She is also the first armless black belt in taekwondo, and is an armless surfer and scuba diver. Typing at 25 words per minute, she signs her emails “toes on the touchscreen.” 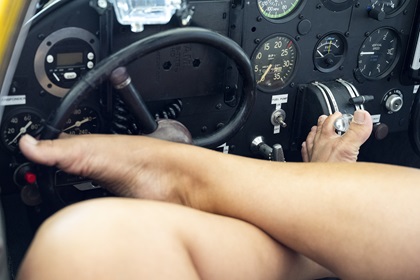 Cox and Harkin flew the pattern at Frederick several times. Cox controls the airplane with one foot on the yoke and the other on the throttle. It was a hot and humid morning, but that did not deter either pilot. Harkin is a former Navy pilot, active GA pilot, and member of the Congressional GA caucus (and AOPA).

“Her air maneuvers were just perfect,” he said. “It was a delightful flight.”

Harkin was a champion of the ADA for many reasons, including having a brother who was deaf and a nephew who is a paraplegic. “The ADA showed people that disabilities shouldn’t hold someone back. There was so much negativity. Young people who have grown up with ADA know no difference, and they don’t expect to be held back.”

The ADA was signed into law by President George H.W. Bush on July 26, 1990. Under ADA, workplaces and public spaces were transformed—curbs were cut and lowered to allow wheelchair accessibility, ramp space was included in new construction, and so much more. What people take for granted in 2020 was nonexistent just 30 years ago.

“Jessica Cox has worked with Humanity & Inclusion [previously Handicap International] since 2013, representing the organization in places like Ethiopia, the Philippines, and Nepal,” said Jeff Meer, U.S. Executive Director for Humanity & Inclusion. “In the U.S., Cox has reflected those experiences in advocacy to keep the pressure on the U.S. to ratify the treaty of the United Nations Convention on the Rights of Persons with Disabilities. We are grateful to her for leadership on this unfinished business.”

Harkin and Cox attempted to fly together several years ago. “It was during a meeting with Senator Harkin about seven years ago working on treaty ratification that the two first spoke of flying together,” Meer said. “Humanity & Inclusion is thrilled to be part of the moment when they realize that goal. The Treaty in some ways mirrors another critical instrument, the Americans with Disabilities Act, which we celebrate this week.”