Get the app Get the app
Get the latest news on coronavirus impacts on general aviation, including what AOPA is doing to protect GA, event cancellations, advice for pilots to protect themselves, and more. Read More
Already a member? Please login below for an enhanced experience. Not a member? Join today
News & Videos Aircraft Maintenance: Fuel and oil in the cockpit

Pilots routinely train on handling in-flight emergencies: Assess the situation, react, and (above all else) never stop flying the aircraft. There are few mechanical failures that can prevent the pilot from continuing to fly the aircraft. However, add fire, smoke, or another contaminant into the cockpit and the pilot has little chance to save the day.

For this reason, I am extremely careful when inspecting any fuel, oil, or other fluid lines inside the cockpit of an aircraft. In an ideal world, all lines containing flammable or hazardous liquids would never be routed through the cabin to begin with. However, many general aviation aircraft are designed with fuel valves in the cockpit (and their associated lines) along with mechanically driven fuel, oil, and hydraulic pressure gauges that also require direct connection to the fluids that they measure. It is extremely important to closely inspect all of these systems during routine annual or 100-hour inspections, paying special attention to fittings and valves in the system. Fuel leaks leave telltale blue stains from where fuel has evaporated and left the dye behind, but small oil leaks can be more difficult to spot.

In some cases, adding equipment such as fuel flow instruments requires additional lines and fittings in the cabin. If you happen to be installing one of these systems, I recommend installing the fuel flow transducer and associated plumbing on the engine side of the firewall whenever possible. Doing so removes several more potential failure points that could leak fuel into the cabin.

Given the opportunity, of course, it’s always best to avoid having these fluids in the cockpit to begin with. Many of the latest engine monitors and electronically driven gauges offer ways to update your aircraft’s systems and remove many of these lines from the cabin. 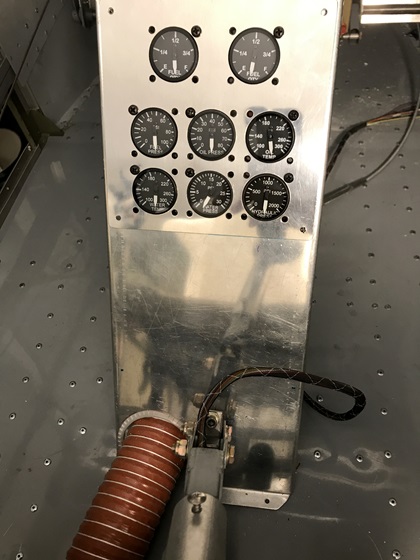 In the case of SocialFlight’s T–51D Mustang, we are doing just that. The original factory design of the Titan Mustang had several fluid systems that entered the cabin of the aircraft. The coolant lines from the water-cooled V8 engine were routed through the center of the cabin to reach the iconic, belly-mounted radiator. More recently, Titan has been routing these lines outside the cabin, nestled in the wing root, which is what we are doing. That left us with valves for the main fuel shutoff, auxiliary fuselage fuel tank feed, and emergency gear extension. In addition, a mechanical pressure gauge for the gear system required a fluid line in the panel as well.

We began the process of removing fluid lines from our cockpit by converting the cockpit controls for the fuel shutoff and emergency gear extension to cables that operated remotely mounted valves in gear wells of the aircraft. Titan Aircraft was extremely helpful in providing hardware and assistance for this, using designs they had in the works from other aircraft. Next, we added an electrical solenoid valve in the fuselage to control fuel transfer from the auxiliary tank using a switch in the panel, rather than a mechanical valve in the cockpit.

However, when it came time to eliminate the last hydraulic line from the cockpit, we were stuck until UMA instruments came to the rescue. UMA makes a complete line of electronically driven instruments that are replacements for traditional mechanical gauges. The company happens to produce an electronic hydraulic pressure gauge and sender that was a direct fit to replace the mechanical gear pressure gauge in the cockpit. And, they had it available in a variety of sizes that included a small, but easily readable 1.25-inchround instrument that looked right at home in the Mustang. In fact, it looked so good in the Mustang’s center pedestal that we decided to redesign that part of the aircraft to contain eight of UMA’s 1.25-inch gauges, including fuel level (left and right), fuel pressure, oil temperature, oil pressure, water temperature, water pressure, and hydraulic pressure.

Each of the UMA instruments is identical, with a nine-pin D-sub connector on the back and easy-to-read black-and-white dial on the front. Once we know our normal and limit ranges, we may send them back to UMA to get painted. But until then, they look perfectly in-place in our World War II-era replica warbird…electronics and all.

Whether you are inspecting your aircraft, upgrading it, or building one from the ground up, it pays to think carefully about the fluids that flow through your cockpit. Inspect the complete systems regularly and be aware of any odors or residue that could indicate a leak. Fuel or oil in the cockpit can be catastrophic in flight and potentially prevent you from doing your No. 1 job as a pilot: flying the aircraft. Until next time, I hope you and your families remain safe and healthy, and I wish you blue skies.