Get the app Get the app
Get the latest news on coronavirus impacts on general aviation, including what AOPA is doing to protect GA, event cancellations, advice for pilots to protect themselves, and more. Read More
Already a member? Please login below for an enhanced experience. Not a member? Join today
News & Videos Letters from our May 2020 issue

In “Little Big Show” (May 2020 AOPA Pilot) pilot Chuck Tippett was shown flying a 1927 Travel Air, not a Stearman.

“Budget Buy: Aeronca Champion 7AC” (May 2020 AOPA Pilot) incorrectly described the location of the fuel tank in early Champs. Vintage 7AC Champs were built with the fuel tank in the fuselage. American Champion switched to a wing fuel tank with the 7EC versions introduced in 2006 under the light sport aircraft category.

We welcome your comments. Send letters to Editor, AOPA
Pilot, 421 Aviation Way, Frederick, Maryland 21701 or [email protected] Letters may be edited for length and style. 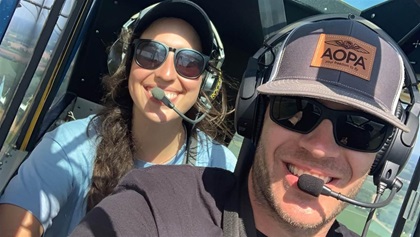 “There’s a grace in great STOL flying that I’d never recognized until the Wisconsin trip,” said Alicia Herron of venturing beyond on-the-map airports to the state’s “side country” for “How Green Was the Valley,” which begins on p. 58. “Flying with Ross Wilke, Jim Stevenson, and Riley Kennedy around the side country was like watching talented musicians play a difficult tune perfectly and by heart, while blindfolded. They made it look effortless. I was spellbound after almost every landing, and I aspire to STOL fly with their same level of proficiency one day.” Herron said the morning flight to New Holstein was one of her all-time favorites. “We left around 6 a.m. and flew up in loose formation over a light scattered layer of clouds that burned off not too far from Middleton. I can’t wait to go back to New Holstein, maybe even with my own airplane and as a part of the demo next time.”

I wanted to send a note to say how much I enjoyed Julie Summers Walker’s stories in the May issue. “Grandma’s 182” was a true family adventure—what girl power! Jan Perch sounds like an amazing woman who trailblazed a path for her daughter and granddaughter.

Also, I loved her story about the Flying Circus (“Little Big Show”) as many of those pilots hangar their aircraft at my local airport in Culpeper, Virginia. It truly is stepping back in time when you attend the show on Sunday afternoon.

Thank you for the wonderful piece, “Little Big Show,” on the Flying Circus. We all felt incredibly honored and proud to be featured in your publication. Julie Summers Walker did a beautiful job telling our story, and Chris Rose’s photos really captured the feel of the place. I was especially humbled to have my brother’s and my story included in the article. He would have really loved that. I will always treasure the article and feel like Mike’s memory will live on in her words.

With regard to the article regarding Maury Patkin’s Beechcraft Bonanza A36 avionics transplant (“Avionics: Obsolete Panel Made Modern”), it’s a most impressive panel, particularly so with the weight savings. That being said, one of the items mentioned is that the removed Bendix/King KNS 80 is obsolete. I say hardly. It can be still be used legally for IFR en route waypoint navigation and provide terminal VOR/ILS and powerful DME reception with a hold option. Unfortunately, new KNS 80 installations with approved IFR RNAV have been nixed by the FAA. If you still have an existing preapproved installation, you’re good to go with PBN/B4 annotated in the remarks section of your IFR plan for en route RNAV.

My Mooney has the KNS 80 and is also equipped with the latest radar vector following technology: autopilot. The VOR/DME RNAV approaches earmarked for this unit were erased long ago. However, that may not be a bad thing as we all know the accuracy of GPS approaches to KNS 80 approaches are far more accurate and safer. In the aforementioned A36, the whiz-bang Garmin G500 TXi just won’t interface with the still-repairable KNS 80. However, a reliable older or new CDI hooked to the KNS 80 would be an excellent backup to either a GNS 650 or 750 and should be considered vs. an expensive second GPS/VOR/ILS panel navigator.

Speaking of whiz-bang new avionics, the Apollo series, Lowrance, King KLN 90, Magellan, and Northstar lorans and GPS systems are all long gone despite the fact that they appeared in the decades after the KNS 80. The lost cash to owners who installed those relics (boat anchors) is frightening. In the article, Dave Hirschman referenced a new GNS 750/650 combo. Now Garmin is touting the Xi series, instantly lowering the value of these “older” 650/750 units. Interestingly, the cost of the KNS 80 in 1981 dollars is nearly equivalent to that of today’s Garmin 750Xi; however, IFR GPS installations are far pricier. And then there’s the Boeing/Jeppesen monopoly database update costs, which is an irritant.

The KNS 80 is three inches tall, weighs six pounds, is air cooled, and works well when you’re flying above 5,000 feet agl. I use the Garmin Pilot app to plot a course by touching a waypoint on the low IFR chart, then selecting the flag with the green dot. That will give me an option for VOR bearing and distance. I note on paper and punch a sequence into the four available on the KNS 80. Voilà. So far so good, until the FAA shuts down my favorite VORs.

I recently purchased The Last Hero: Charles A. Lindbergh at a used bookstore while on vacation in Florida. On the way home, we had planned to land at Valdosta (VLD) for fuel, food, and to stretch, but low ceilings forced us to continue north in search of better weather (ceilings were 300 feet agl at Valdosta). We selected an alternate airport along the route, 90 miles northwest, in Americus, Georgia (ACJ), with much better weather conditions. Upon landing and walking inside the airport, the first thing I saw was a painting of Charles Lindbergh.

The airport in Americus just happened to be where Lindbergh had his first solo flight—and where he bought his first airplane, a Curtiss JN–4 Jenny. What are the chances? After eating lunch at the field, throwing the football, and fueling up, we were on our way home. I couldn’t wait to read the book, as it seemed like fate. Also, within the pages I found a photo of a woman, presumably belonging to the previous book owner. It only added to the uniqueness and fun experience of a used book purchased for $6.99.

Never Again is one section of AOPA Pilot that I never miss, but the article, “Mother’s Day Get-Home-Itis,” references the persistent and very dangerous misperception about the potential for a tail stall and even details the appropriate action if you should encounter a tail stall. In 2016 the FAA released a new training video about the dangers of ice-induced stalls (youtu.be/NBX84bF2d4U), saying, “Much has occurred since NASA’s original 1998 ice-contaminated tailplane stall video, the information in this training video supersedes, supplants, and replaces the instruction in all previous NASA tail stall icing training videos.”

Early in this film is the unambiguous statement that “This film specifically addresses the reality that for the past 30 years, most icing accidents were caused by wing stalls versus tail stall.” It is imperative that we eliminate this misperception about the frequency of tail stalls, as the correct response to a tail stall is the exact opposite of the response to a wing stall—a mistake that could easily be fatal.

The good news is that we practice wing stalls throughout our training so that the correct response to almost any icing stall is to do what comes naturally. You guys should do an article on this—someone should have caught this before it was printed in the magazine.

Current guidance from NASA is that tailplane stalls occur very rarely, only on a limited number of susceptible aircraft models, and only if flaps are fully deployed. AOPA Pilot agrees that the author was not in danger of a tailplane stall as his aircraft was configured during the flight. —Ed.