Get the app Get the app
Get the latest news on coronavirus impacts on general aviation, including what AOPA is doing to protect GA, event cancellations, advice for pilots to protect themselves, and more. Read More
Already a member? Please login below for an enhanced experience. Not a member? Join today
News & Videos L–4 restorer: Ken Schmitt

One of the most exciting aspects of a visit to EAA AirVenture each year is the opportunity to see the unique aircraft restorations that painstaking owners have been working on for months, even years. 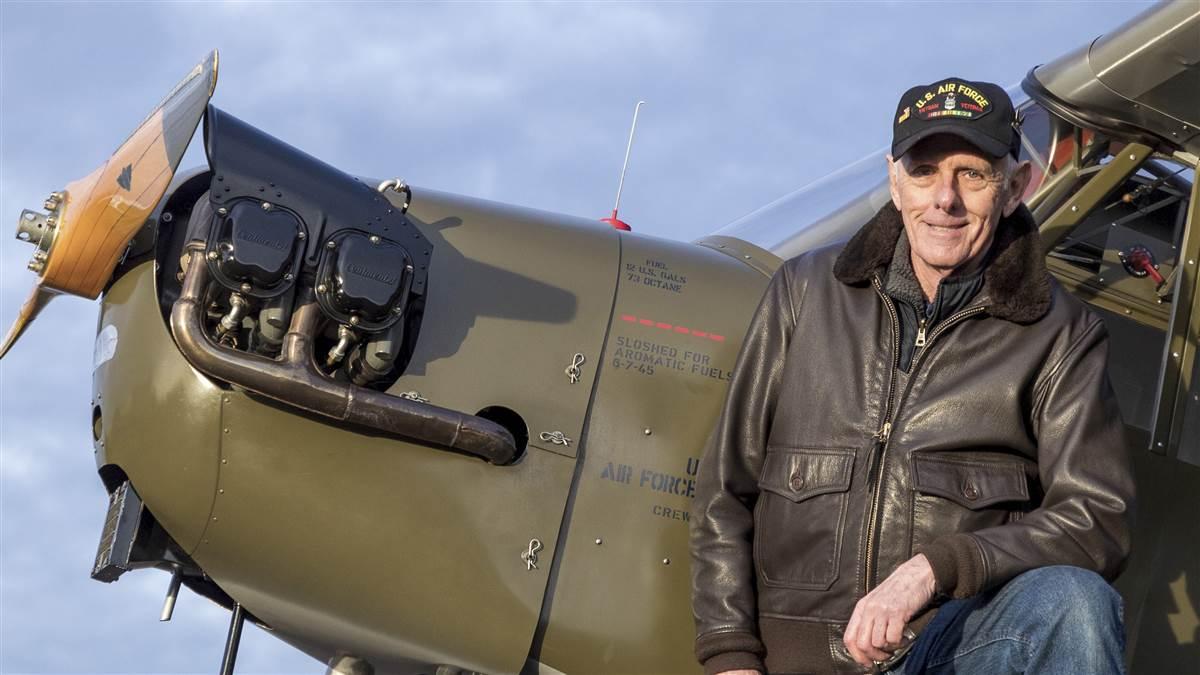 Favorite aircraft | “Not to take anything away from my L–4J but my favorite is the Stearman. I bought a 1942 PT–17 in pieces and restored it to its original Army colors. I flew it for 10 years, eventually selling it and buying a basket-case Cub that turned out to be my L–4J.”

Extra | “I’m a veteran myself and the airplane gives me a chance to meet people and hear about their experiences. The airplane is an important part of our history.”

These beautifully restored airplanes take people back in time as their restorers have researched, repaired, and remade their antique finds to be as near perfect as the day they left the assembly line. One such restorer is Ken Schmitt, an Oregon-based former weapons mechanic during the Vietnam War. He worked on the aircraft of the iconic Misty squadron—which flew the two-seat version of the Super Sabre, the F–100F, in 1967.

“I always loved airplanes and loved working on model airplanes with my brother,” the soft-spoken, modest builder said. “I built a Stearman in my yard and garage but sold it and always regretted it.”

So, Schmitt discovered a bare fuselage with skeletal wings and, believing it to be a Piper Cub, began researching its restoration. He was delighted to discover it was in fact a 1945 Piper L–4J Grasshopper, one of the important liaison aircraft of World War II. He says it looked like a bird cage when he began in 2000, but after a 17-year restoration it “looks exactly like it would have in 1945” when the aircraft flew in the Pacific theater.

“I’m meticulous,” Schmitt said. “It’s why it took me so long. It’s an important part of our history. I think it came out really nice.”

Others agree; when he displayed the L–4J at AirVenture in 2019, the restoration won the L-Bird warbird trophy and was selected as one of the finalists for the convention’s airplane of the year. It also won the Henry “Hap” Arnold Trophy for military restoration from the National Aviation Heritage Invitational. Schmitt had hoped his Grasshopper would be on display again this year, but the big show is canceled because of the worldwide pandemic. In 2019, Ragwood Refactory owner Kyle Bushman (“Beauty or the Beast?” June 2020 AOPA Pilot) had flown the airplane to Oshkosh for Schmitt—and was prepared to make the trek again.