Get the app Get the app
Already a member? Please login below for an enhanced experience. Not a member? Join today
We will be performing maintenance on our systems Sunday 9/19 from 12am to 6am ET. During this time, you may experience intermittent service outages. We appreciate your patience.
News & Media Opinion: Savvy maintenance

Why valves stick: How you can avoid engine damage and power loss

If you fly behind a Continental or Lycoming, each of your engine’s cylinders has two valves: intake and exhaust. 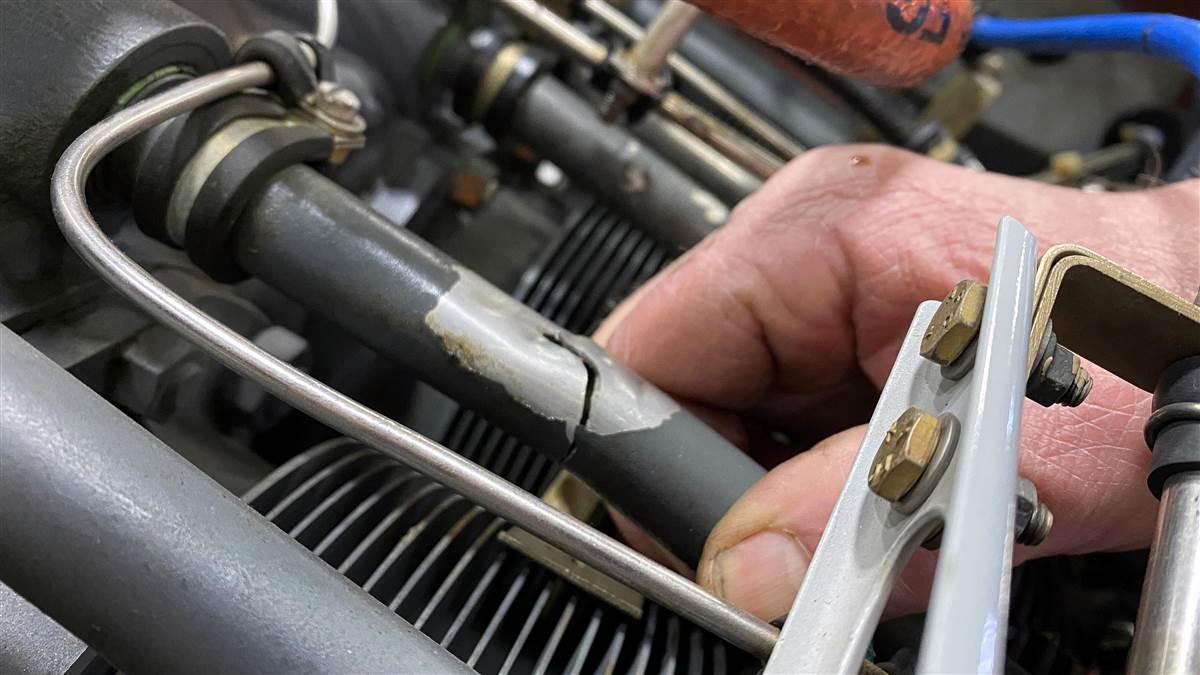 A stuck exhaust valve caused a bent pushrod and broken pushrod housing on this Lycoming engine.

The valves open and close by sliding in and out through close-tolerance tubes called valve guides that are press-fit into the cylinder heads. The valves are opened by a valve train consisting of a cam lobe, a lifter (tappet), a pushrod, and a rocker arm. They are closed by a pair of strong concentric valve springs.

A sticking or stuck valve is one that no longer slides smoothly in and out through its valve guide. This can happen when there is a buildup of deposits on the valve stem and/or inside the valve guide.

Of course, you knew all that. What you might not know is what these deposits are made of (it’s not carbon), what causes them to form (it’s not heat), what happens when they do (it’s not pleasant), and how you can prevent this from happening (it’s not hard).

If the valve guide isn’t excessively worn, there’s not much clearance between the guide and the valve stem. The clearance is intentionally tight so that the valve can’t wobble and remains perfectly concentric with the valve seat when the valve closes. The stem-to-guide clearance is at a minimum when the cylinder is cold and loosens up a little as the cylinder heats up. That’s why when a valve starts to get sticky, it is first noticeable right after the engine is started cold.

A sticky valve causes the corresponding cylinder not to make power (or at least enough power) and manifests itself as a rough-running engine. If you have an engine monitor, you might also notice that the offending cylinder is not producing normal exhaust gas temperature.

This phenomenon is known as “morning sickness” (for obvious reasons) and it’s a warning—one that should not be ignored or taken lightly. If you don’t act promptly to resolve the sticky valve, the stickiness can worsen to the point that serious engine damage occurs. If this occurs in flight, the result could be a power-loss emergency or even an off-airport landing.

A valve that gets too sticky can get stuck hard, in either the open or closed position. This can get quite ugly.

If the valve sticks closed, then when the valve train tries to open it, something’s gotta give. What usually gives is the pushrod, which is the weakest link in the valve train. The pushrod typically bends and puts the valve action permanently out of business.

If the valve sticks open, then the face of the valve can be struck by the rising piston, snapping the valve face right off the stem. This always shuts the cylinder down permanently. Occasionally, it shatters the piston and causes a catastrophic engine failure.

We seem to be seeing this problem more often than we used to. And while valve sticking traditionally was a problem that mostly afflicted Lycoming engines, we’re now starting to see it occur in big-bore Continentals.

If you Google “why do aircraft engine valves stick,” you’ll find that a great deal has been written about this subject. Most of it attributes valve sticking to buildup of carbon deposits on the valve stem and inside the valve guide that results from engine oil contacting the hot valve stem and carbonizing.

The conventional wisdom about what causes valve sticking is wrong. While it’s true that valve sticking is caused by buildup of deposits, those deposits are not carbonized oil and the solution is not to run the valves cooler.

My friend Ed Kollin is the smartest guy I know when it comes to the chemistry of internal combustion engines. Kollin is a petrochemical wizard who used to run Exxon’s engine lab, went on to formulate CamGuard, and is a Cessna owner. Kollin performed a laboratory chemical analysis of the ugly, nasty, crusty buildup on a Lycoming exhaust valve and found that the deposits consist primarily of lead, carbon, bromine, and oxygen. These lead oxybromide deposits originate from the tetraethyl lead (TEL) octane booster that is blended into 100LL avgas.

About two grams of TEL are blended into each gallon of 100LL. As the air-fuel mixture is compressed in the cylinder, the TEL is rapidly converted to lead oxide, which is actually the active octane booster that inhibits detonation. However, lead oxide has the nasty habit of coating and lead-fouling spark plugs. Therefore, ethylene dibromide is added to 100LL to “scavenge” the lead oxide by converting it to lead bromide, a molecule that remains in a gaseous state above 1,100 degrees Fahrenheit and passes harmlessly out the exhaust with the rest of the exhaust gases.

As Kollin explains it, the chemical reaction between lead oxide and ethylene dibromide to form lead bromide gas is a bit complicated, goes through a number of intermediate steps, and takes a significant amount of time. The time this chemical reaction takes to play out is a function of temperature—the hotter the combustion temperature, the faster the lead oxide is scavenged into lead bromide gas. There actually are eight distinct steps during which intermediate forms of lead oxybromide are formed that ultimately become lead bromide gas. It’s these intermediate oxybromides that cause the valve sticking problem. 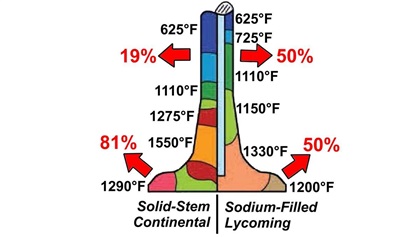 If you look at the accompanying exhaust valve temperature map and focus on the temperatures of the lower portion of the valve stem, the problem will be apparent. Typical Continental valve stem temperatures are just barely high enough to inhibit condensation of lead oxybromides, which is why Continentals aren’t that prone to valve sticking (unless they’re run too cool).

How to prevent sticking

The key to preventing valve sticking is to keep combustion temperatures high. This accomplishes two things: First, it speeds up the scavenging reaction that converts nasty lead oxide to less nasty lead oxybromides to nice gaseous lead bromide. If most of the lead oxide can be converted to lead bromide before the exhaust valve opens, deposit condensation is minimal.

Second, higher combustion temperatures result in higher valve stem temperatures, and that will minimize condensation of any lead oxybromides that remain in the exhaust gas as it flows past the exhaust valve on its way out the exhaust port.

The best proxy we have in the cockpit for exhaust valve temperature is cylinder head temperature. (Note that it isn’t EGT.) Most of us know that it’s important not to let CHT get too high for optimal engine longevity. I’ve long recommended keeping CHT no higher than 400 degrees F for Continentals and 420 degrees F for Lycomings, with CHTs about 20 degrees F lower than those maximum temperatures being just about ideal. We keep our CHTs below those maximums mainly by using the mixture control properly and operating either enough lean of peak or enough rich of peak to prevent excessive CHTs.

But some pilots seem to think that if a little CHT reduction is good, then a lot of CHT reduction must be better. That’s not the case, and now you know why. Excessively cool CHTs mean low combustion temperatures that slow the lead scavenging process, and cool exhaust valve stems that promote lead oxybromide deposits.

To minimize valve sticking (especially in Lycomings), it’s important to try to keep CHTs in “the sweet spot” between 350 degrees F and 400 degrees F as much as possible. It’s also important to lean aggressively during taxi and other low-power ground operations to keep combustion temperatures as high as possible. 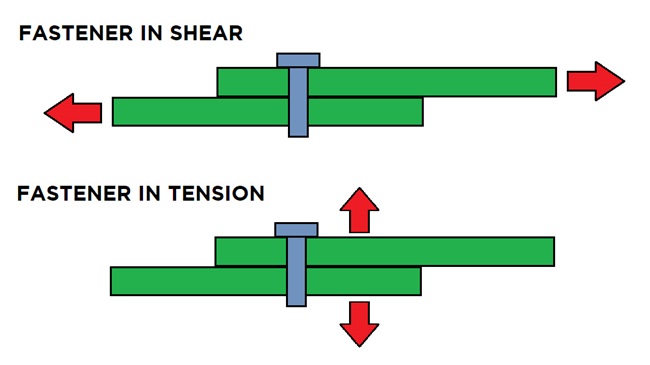 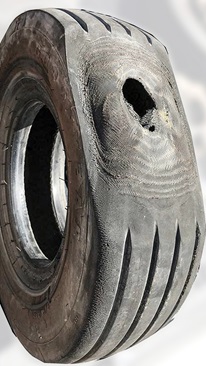 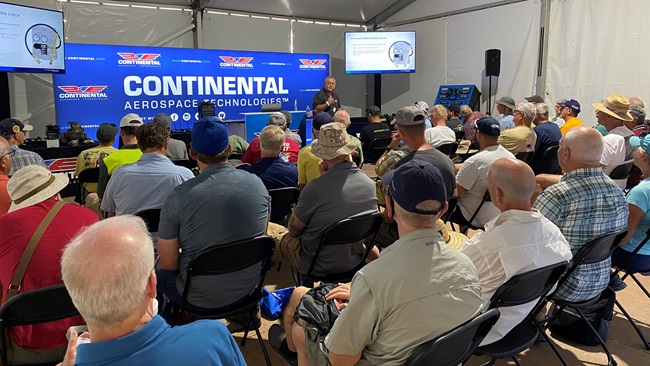 Aircraft Maintenance: AirVenture is like graduate school for owners, mechanics