Get the app Get the app
Already a member? Please login below for an enhanced experience. Not a member? Join today
News & Media Drone pilot filmed protest on assignment

Jamie Goodwick was authorized by the FAA to fly a small drone over people, but he opted to capture the moment, and the movement, another way. 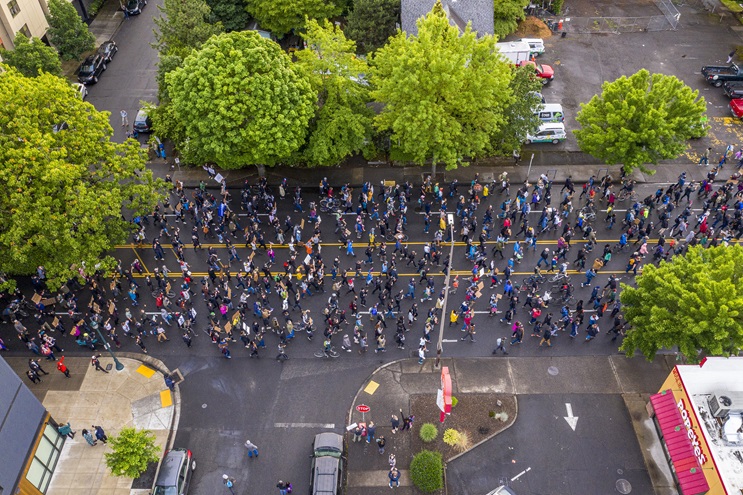 Pivoting as the protesters passed, Jamie Goodwick was able to capture a perspective on the June 6 march down Martin Luther King Jr. Boulevard in Portland, Oregon, without flying his DJI Mavic 2 Pro over people. Photo courtesy of Jamie Goodwick/Portlandrone.

Goodwick, a Newtown, Connecticut, native who has a marketing and video production background, has become a go-to source of professional unmanned aircraft system aerial videography for high-profile clients in the Portland, Oregon, area. His company, Portlandrone, has been hired by the likes of Nike, The Discovery Channel, and Netflix, among others. The FAA granted Goodwick a waiver in December allowing him to fly over people (which is otherwise forbidden by FAR 107.39) using specified equipment including a DJI Mavic 2 Pro equipped with a ParaZero SafeAir Mavic parachute system.

That waiver is available online for public inspection, and was the reason why The New York Times editors called Goodwick seeking aerial images of demonstrators marching to protest social injustice and force police reform following the death of George Floyd in Minneapolis police custody on May 25.

"Flight safety is a critical issue for us whether we are flying drones ourselves or working with others," wrote The New York Times Graphics Director Archie Tse in an email exchange, noting that many members of the staff are certificated remote pilots, including Bedel Saget, the graphics editor who spoke to Goodwick in detail about his waiver. "Having the waiver also gave us confidence in Jamie's ability to operate the drone safely."

Goodwick said the newspaper first called in the early afternoon (local time) on June 6. It was raining at the time, and the day’s march in Portland was not expected to start for several hours. He offered the newspaper images he had captured two days before with the assistance of a visual observer, filming demonstrators as they marched across the Morrison Bridge in Portland.

“It was just an incredible experience, to see that,” Goodwick said of filming the June 4 protest. “You don’t really realize it in that moment, because my focus, and my visual observer’s focus, was to make sure the drone was safe, that we were safe, and there was a lot of air activity, UAS activity, at that particular session downtown.” 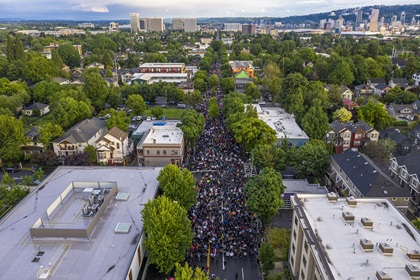 Goodwick said they ended that flight as soon as they felt confident they had the right images to tell the story, wary of the risks involved with navigating airspace crowded with many unmanned aircraft to film large crowds of people. Notwithstanding the focus and concentration required to maintain situational awareness and safety, the importance of the moment did occur to Goodwick even before he landed the aircraft:

“This entire movement, tens of thousands of people gathering in a community to, to speak their voices about a certain movement. It probably took me 10 to 15 minutes of flying to finally realize what I was part of, and capturing, and that was really surreal. It was humbling.”

But The New York Times was not really interested in two-day-old footage.

The editors were compiling on June 6 a visual storytelling feature for the Sunday editions, in print and online, that would include images from across the country, and around the world, that day. And rain was pouring on Portland when the first call came, Goodwick said, so he wasn’t flying anywhere.

A few hours later, however, there was a break in the weather. Goodwick fired off an email to the newspaper alerting them that content would be coming, and hopped in his car to head downtown.

It was still light at 9 p.m. when he captured footage with his Mavic 2 Pro that would soon become part of an international news story presented as a compilation of aerial images from around the world.

Goodwick, for this flight, opted not to utilize his FAA waiver, choosing instead to fly carefully over empty streets, and over the rooftops of buildings flanking the march.

“There’s just no reason to put anybody who’s doing this movement in danger,” Goodwick said.

He was able to fly ahead of the demonstrators, over streets that had been cleared ahead of the march, and capture the huge crowd in context. As the peaceful demonstration passed, he pivoted the camera to capture the protest from the side, tracking the group and matching the speed of the walkers precisely, so only the buildings appeared to move in the frame. Those two clips stood out to the newspaper editors, who eventually selected them to lead the online presentation. “I didn’t need to fly over people to do that.”

It was already after midnight on the East Coast when Goodwick hustled back to his office and loaded those clips into a video editor, spending only enough time on them to add a watermark, and alerted The New York Times editors that the files were available for them to download. In a matter of a few short hours, the images Goodwick captured were printed on newspapers circulated worldwide, and posted on The New York Times website while Goodwick slept. 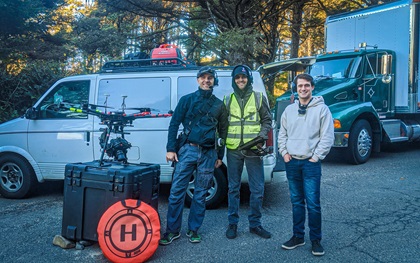 “I got text messages before I even woke up,” Goodwick said. He awoke to one of those messages around 5:30 a.m. and “couldn’t go back to bed because I was so stoked on it.” He managed to find three copies of the printed newspaper in the course of visiting 12 local retailers. He used the word “humbling” to describe the overall experience:

“Our company has a very small … opportunity to share this story with, and share our community with, the entire world,” Goodwick said. “It’s very humbling. I’m very blessed, I’m very humbled. And honestly, it’s a lot of luck, too. We were the first ones they called.”

Goodwick said he has heard “a lot of great response” from clients, colleagues, and even the public. Drones have provoked a range of reactions, from outright suspicion and anger to awe, and Goodwick said individual pilots, particularly professionals, are the only people likely to speak up on behalf of the technology and those who use it responsibly.

Goodwick said many professional operators are contributing to that effort to help fellow pilots and the public understand how the technology can be used both effectively and responsibly.

“I’m hoping that even … if we impact one person [who] was like, ‘I was considering flying over somebody, but now I’m not going to because I know I can get the shot a different way,’ then we’ve done our job. But we just have to keep continuing that.”