Get the app Get the app
Get the latest news on coronavirus impacts on general aviation, including what AOPA is doing to protect GA, event cancellations, advice for pilots to protect themselves, and more. Read More
Already a member? Please login below for an enhanced experience. Not a member? Join today
News & Videos Aerospace professionals discuss race in aviation

Editor's note: This article was updated June 19 to indicate that more than a dozen aerospace professionals participated in the discussion.

The Organization of Black Aerospace Professionals (OBAP) held the second session of its Courageous Conversations series with more than a dozen diverse aviation industry leaders, each bringing a unique perspective to the discussion.

The session began with an emotive video of words displayed over black and white faces, words that set the tone for the discussion: “Where are we to go? How are we to respond when we are shown over and over and over that our lives do not matter?” The video established a clear context for the conversation about improving diversity and eliciting tough conversations about race within the aviation and aerospace industries.

Elizabeth Tennyson, executive director of AOPA’s You Can Fly program, took part in the panel and outlined ways that AOPA is actively addressing the issue of inclusion.

The conversation began with Southwest Airlines Pilots Association President and Captain Jon Weaks sharing how he will work to protect black pilots among his ranks following the recent events involving George Floyd. Weaks said the video of George Floyd’s death in police custody “helped to ignite the cause” and that this has hopefully forced people “to look in the mirror and examine our soul and question our own communities and situations. We can’t let it go to waste.” He encouraged others motivated by the current tensions to be as passionate about protesting as they are about voting.

Shades of Blue President and United Airlines captain Willie Daniels is one of less than 3 percent of U.S. airline pilots who are black. He talked about sharing the cockpit during long international flights with mostly white co-pilots and having met colleagues from both ends of the belief spectrum when it comes to race and racism.

Dawn Cook, representing the President’s Committee for Diversity and Inclusion from the Air Line Pilots Association International, was on the panel on behalf of an even smaller demographic: black female pilots, who make up less than 1 percent of all U.S. airline pilots. Cook told listeners how the President’s Committee for Diversity and Inclusion is a powerful one that is “diving into hard conversations that need to be had, and it’s not just with our airlines, it’s with the leadership.”

Moderator Captain Carole Hopson asked Allied Pilots Association President and American Airlines captain Eric Ferguson about white privilege. Ferguson, who is white, shared that he was a third-generation American Airlines employee and a second-generation American Airlines pilot, so he was “born into [aviation] and knew of its availability.” He said he knew most of his life that he would become a pilot and continued by saying that he believes, “the absence of knowledge often means the absence of opportunity,” suggesting that without having exposure and access to the potential opportunities that exist within the aviation and aerospace industry, many minorities can’t pursue what they don’t realize exists.

She also described how AOPA is diligently working to improve its hiring process while trying to eliminate unconscious biases that might unknowingly discriminate and prevent minorities from being considered and ultimately hired for positions within AOPA. “Overcoming those is a very important step for many organizations.”

Longer-term solutions, Tennyson said, require reaching the younger generation of impressionable minds. “About five years ago we created the You Can Fly program, which is all about lowering barriers to entry.” One facet of AOPA’s You Can Fly program is the high school initiative. “We offer a four-year aviation STEM curriculum to schools across the country with the tools needed to teach it for free. Schools that have traditionally been underserved or underfunded can’t always afford things like an aviation curriculum, but we make it available at no cost.”

Tennyson also said that AOPA’s High School Aviation STEM Curriculum is working to reach the next generation of pilots, including a diverse audience that would not normally be exposed to aviation at a younger age.

“Last year we had more than 5,000 students in the program that included 38 percent people of color and 23 percent female, and 27 percent of those schools are considered high poverty schools. These are kids that have not been traditionally exposed to aviation, they probably don’t know a pilot, they probably don’t have a neighbor who’s a pilot, but they’re learning that …they can be a pilot or another type of aerospace professional,” added Tennyson.

One surprise guest on the panel was American Airlines CEO Doug Parker, who recently made headlines after flying on competitor Southwest Airlines. But that wasn’t the headline. After flight attendant JacqueRae Hill noticed a book Parker was reading titled, White Fragility: Why It’s So Hard for White People to Talk about Racism, by Robin DiAngelo, Hill struck up a conversation with Parker about racism.

“We had a conversation that’s changed me,” Parker said. “I’ve got a lot to do because of what she’s done for me and what she’s taught me. I am a first-person example that these conversations matter and they make a big difference.” He went on to say that “until we have the conversations, we don’t get to the solutions. The conversations are what start the learning and the knowledge, and the sharing, and it’s been too long of us not doing this.”

The third session of the Courageous Conversations series, “Minorities and the Military: A Town Hall on Racism and Discrimination in the Armed Forces,” took place June 18 at 3 p.m. Eastern Daylight Time.

You Can Fly: Don't touch that dial

You Can Fly: Celebrating resiliency in a time of turmoil 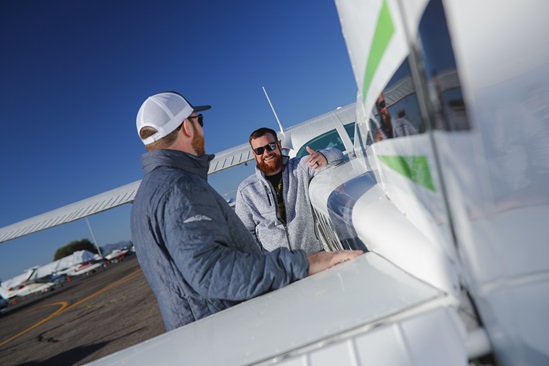 You Can Fly: Celebrating resiliency in a time of turmoil