Get the app Get the app
Get the latest news on coronavirus impacts on general aviation, including what AOPA is doing to protect GA, event cancellations, advice for pilots to protect themselves, and more. Read More
Already a member? Please login below for an enhanced experience. Not a member? Join today
News & Videos What a drone in hand is worth

Many people, including me, get excited when a new drone hits the market. There are usually fresh bells and whistles touted with a slick sales pitch, but it’s worth asking yourself if those new features are worth beating up your credit card. 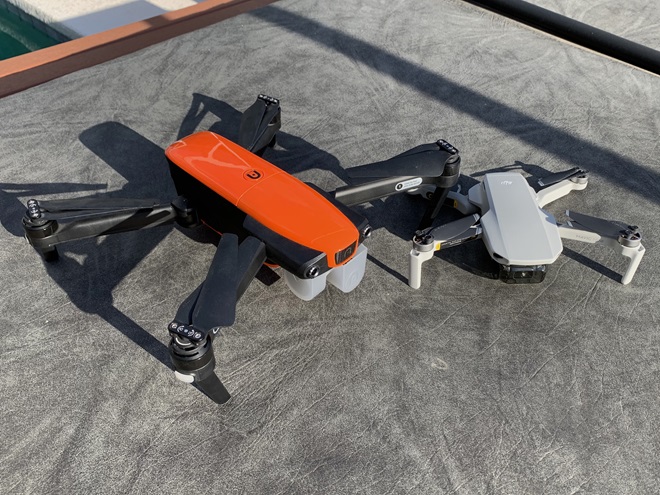 The drones you bought a few years ago may have capabilities that get overlooked when the latest hype wave rolls in. Photo by Terry Jarrell.

As electronics consumers, we have become accustomed to gadget manufacturers churning out new products at a blistering pace. Updated cosmetics, a new bell or whistle, and some slick marketing is all it takes to make your wallet tremble while you dive into the excitement of placing your order.

But let’s pump the brakes for a second: Do you really need this new shiny toy? Is your current hardware really out of date? Can this new drone  do anything really important that your current one can’t?

Regular readers know how I like to pick apart the capabilities of different models and focus on those that may be overlooked or drowned out by marketing hype. Manufacturer documentation does not always cover every detail, so you might be surprised to learn that once you know—and I mean really know—what your current equipment is capable of, you might not shudder with pangs of fear-of-missing-out when the next shiny new gadget comes along.

Much is made of filmmakers hoisting six-figure cinema cameras aloft, often on custom rigs that cost more than a high-end sports car. As the director of the Drone Cav for Romero Pictures Indie Brigade, I work with filmmakers from zero-budget projects to feature films, helping them maximize their aerial cinema results without breaking the bank.

If “cinema” conjures in your mind an image of an eight-rotor rig and detachable cinema lenses, it might surprise you that we mainly fly popular compact, “consumer” models such as the Autel Evo, DJI Mavic Pro/Air, and yes, even the mighty DJI Mavic Mini. These systems check all the boxes we typically need to produce excellent results, such as 4K resolution (2.7K for the Mavic Mini), reasonably good flight time, dependability, and, very importantly, a compact and easily deployable form factor.

I know what you’re thinking: For film, don’t you need something like a DJI Inspire 2, or at least a Phantom 4 Pro? Well, maybe yes, and maybe no. It depends on your needs, and how the resulting footage will be distributed and consumed. More often than not, a compact, budget-friendly drone can get the job done, and done extremely well. A lot depends on how well you understand your equipment and apply your manual flying skills and camera settings.

All the ‘K’ that money can buy

Have you seen the incredible specs for some of these new cameras? The recent release of the Autel Evo II offers 6K and 8K cameras (wow!) at price points below $2,000. Of course, you will need to add some for accessories, including batteries and other doodads, but still, that is some impressive resolution at a decent price!

But 8K is still very new, and 4K continues to be the most popular resolution standard that filmmakers work with. Also known as ultra-high definition, 4K gives you plenty of pixel leeway to punch in (crop) on your image if needed while preserving gorgeous detail.

And let’s not forget about the computing power you will need to edit 6K and 8K video. If your computer already chokes on 4K, you can expect more stuttering headaches unless you learn to edit with proxies or spend big dollars for a more powerful workstation.

What about the lower resolution of, say, the DJI Mavic Mini at 2.7K? I’m glad you asked! Give some thought to the types of scenes you will be filming. Will they always be viewed on a 4K screen? Do you plan on doing tons of postproduction editing to stills? Will you be mainly sharing your videos online, posting to platforms such as YouTube, Vimeo, or social media? What about ease of carrying your gear around for those trickier locations that might be a long hike from the nearest road?

Now, what is your budget? After considering these factors, you may find that the Mavic Mini is ideal, and for less than $500 you can get a fully decked-out kit with three batteries, carry case, and more, ready to roll.

And yes, I have used my own Mavic Mini for production work, and the results were perfectly acceptable.

You may have seen different preprogrammed flight modes built into the flight control software on different models. Automated maneuvers like orbit, rocket, dronie, and others make the drone fly in a certain pattern with the push of a button. Cool, indeed, but did you realize that you can fly all these same maneuvers with a little practice on most any drone? Yup, true fact.

Orbits, arcs, square-box flying, and other manual skills keep you, the pilot, in control of not only your flight but also your shot. I always say this, but getting out as often as possible to practice your manual flying skills will serve you well when it comes time to fly the important stuff.

Manual skills can create more “artistic freedom,” because while the drone might fly a perfect orbit around the subject, there are times when something more elliptical might better suit the shot. Flying manually also gives you more control over the movement, and the speed, than automatic modes allow. (Slower is generally better when it comes to moving the camera.)

Making it big with something small

Learning all you can about your camera is such a key to success. Do you need some built-in trickery or a highly expensive drone to get pixel-dense panoramas? Nope.

If you have a drone that creates panoramas automatically, keep in mind it simply captures a series of images and the software stitches them together. This usually works fine, but how about taking control yourself? This way, you can get even more detail and have more control over the end result, or build a pano using a drone that does not have the automation.

Let’s put this in practice with the entry-level, budget-friendly Mavic Mini. This drone captures 12-megapixel images and does not have an automatic panorama feature. So how do we get a pixel-dense pano out of this little guy? Easy! 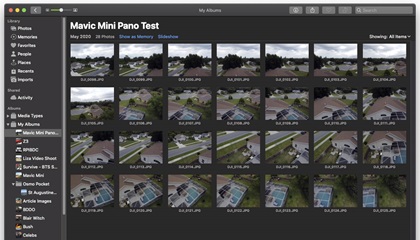 I flew my little bird about 50 feet above the ground and captured a total of 28 images. While more expensive models automate the overlap (pixels that form image features that are shared by two adjacent images), you can do it without a lot of help. I’ve found that it helps to capture images in horizontal rows, left to right, yawing the drone ever so slightly between pictures.

Look closely at each sequential image in the photo on the right. You will see the overlap from one image to the next. This is important—take lots of photos with lots of overlap!

You can take either a single row or several rows of photos, but something to be mindful of is upper and lower frame distortion. Tilting the camera down can give a “bending” effect that won’t match up well with the straight horizon, and might make it tougher for your photo-stitching software to figure out, but this is up to you and your creativity. Experiment!

Once you have all your images captured, land and pop the memory card into your computer. There is a wonderful, free tool called Autostitch that makes quick and easy work of stitching your images together into one big, high-resolution image. I use it on my Macs, but a PC version is also available, as well as paid upgrades for more features.

For mobile device users, Affinity Photo for iPad is a pro-level photo editor that just so happens to have a panorama stitching feature built right in. Import your images, follow the prompts, and in you time you get an amazing result ready for color correction, and any other editing you want to do.

Get reacquainted with the tool(s) you have

Spend a little time online, searching for user groups specific to the make and model you fly, photography and videography forums, and other places a simple Google search might lead you, and I bet you will find some things to get excited about that you did not know before. Even older drones, like the DJI Mavic Pro, Autel Evo, and others of that bygone generation (a few years ago) still get the job done (and give your credit card time to recover).

If you haven’t already, look into using inexpensive accessories such as neutral density filters or better software editing apps to get more out of the camera you already have. Maybe it’s time to replace a battery or two and pop on a new set of props or do a little maintenance or minor repair, but chances are, you have a very capable machine in your hands right now. Throwing money at the latest new toy coming down the road isn’t guaranteed to make you a better pilot, or cinematographer—that is determined by how well you know your drone, and what it can give you.

Fly safe, have fun, and don’t stop being creative! 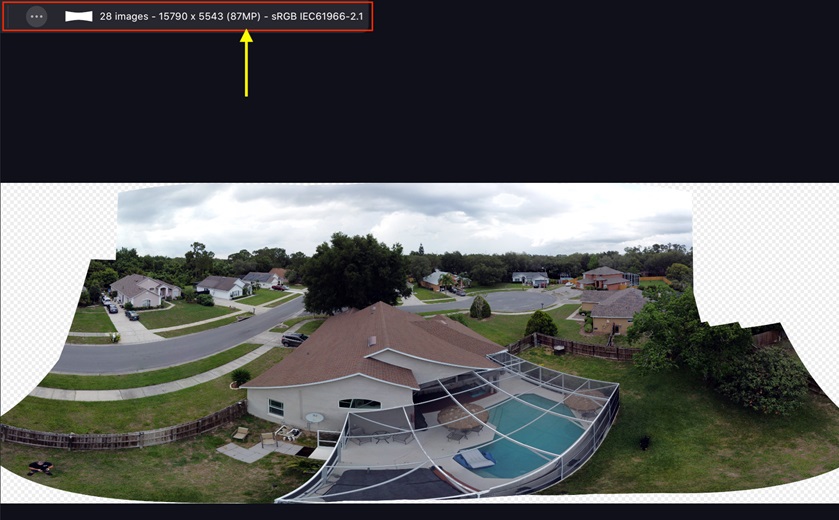 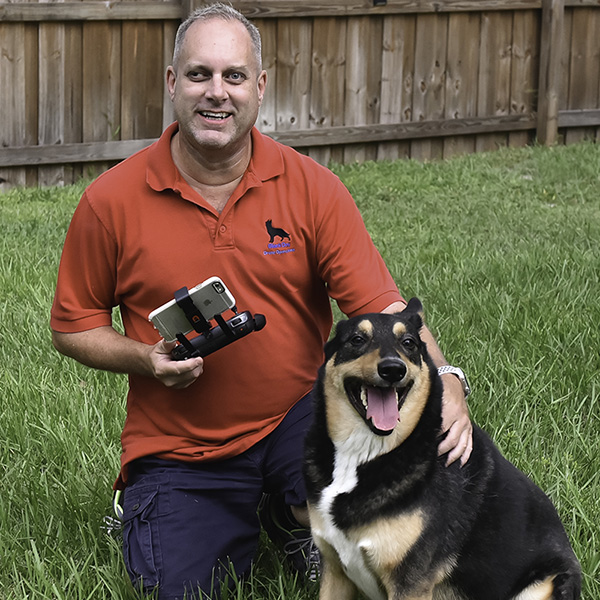