Get the app Get the app
AOPA will be closed July 4th, in observance of the Independence Day holiday. We will reopen at 8:30 am ET on Tuesday, July 5.
News & Media Tune Airport devastated as tornadoes strike Nashville area

Editor's note: This story was updated on March 4 and 5 with additional information about the storm's impact, a revised death toll, a damage report from Lebanon Municipal Airport, east of Nashville, and the National Weather Service's preliminary assessment of tornado intensity.

Powerful storms spawned two tornadoes that ripped through Middle Tennessee in the early morning of March 3, killing at least 24 people and knocking out power to an estimated 45,000 Nashville residents. 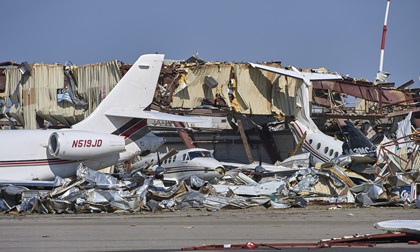 The path of damage from the storm that struck the area around 1 a.m. was reported to stretch for miles through the city. Some people remained unaccounted for, and the death toll was likely to rise, Gov. Bill Lee said in a news conference March 3. As of March 4, about 35,000 customers were still without power.

The Tennessee Emergency Management Agency announced that a state of emergency was in effect and that the state’s emergency management plan had been activated. 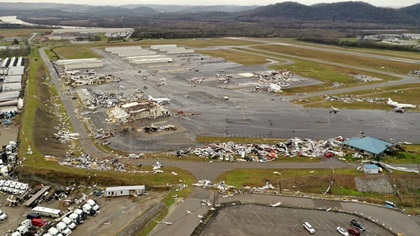 “John C. Tune Airport (JWN), [Nashville International Airport’s] sister airport in West Nashville, sustained significant damage due to severe weather earlier this morning. There were no reported injuries. Several hangars have been destroyed, and power lines are down. In the interest of safety, the public is advised to avoid John C. Tune until further notice. The Airport Authority has activated its Emergency Operations Center to coordinate the response,” the airport authority said in a tweet.

On March 5 the National Weather Service’s Nashville Weather Forecast Office issued a damage summary reporting that the storm produced two “very damaging” tornadoes. One tornado reached EF2 intensity on the Enhanced Fujita Scale (winds 111 to 135 mph) “as it tracked across John C. Tune Airport and into the North Nashville and Germantown areas.” It intensified to EF3 (winds 136 to 165 mph) three times as it tracked east through the Lebanon Municipal Airport area before dissipating near Gordonsville, about 50 miles east of Nashville, about 58 minutes later.

“We lost most everything,” said Randy Harmon, owner of Harmony Air, an aircraft management, flight training, and charter company based at John C. Tune Airport.

Harmon told AOPA by phone that he was “home in bed” 20 miles from the airport when the storms struck.

“I got a call at 3 a.m. telling me what was going on, and that the fuel trucks were on fire,” he said.

With power lines down and a possible gas leak under investigation at a food distribution company’s facility adjacent to the airport, Harmon was not expecting to be allowed back onto the airport until March 4. 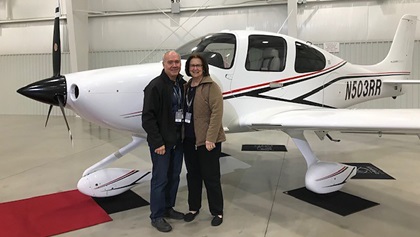 But what he had heard so far was grim, including an official’s account of a scene with damage including Dassault Falcon 50 and Falcon 900 jets “thrown 100 yards.”

For the 16-aircraft fleet his company manages, the news was no better. “The King Air 350’s gone,” he said.

Searching overhead imagery for a Cirrus SF50 Vision Jet proved fruitless: “I don’t know where it is. The hangar’s gone.”

Despite the crushing blow, Harmon was keeping his spirits up, noting that two company single-engine airplanes were away from the airport for maintenance—and another Cirrus airplane under management had miraculously come through unscathed.

Harmony Air’s office also weathered the violent night intact, and fortunately for his 14-year-old business, “We’ve got insurance and nobody got hurt,” he said, adding, “This is not the hardest thing we’ve been through.”

The trail of destruction extended along Interstate 40 east of Nashville. Aircraft and structures at Lebanon Municipal Airport took a beating, and the airport remained without power on March 4, said pilot Miles Dillon of Class Bravo Air, who was fielding calls forwarded to his phone from the airport’s phone number.

“It was almost a direct hit on the airport,” he said. “It’s sad looking at it.”

Dan Namowitz has been writing for AOPA in a variety of capacities since 1991. He has been a flight instructor since 1990 and is a 35-year AOPA member.
Go to Dan Namowitz's Profile
Topics: Airport, Weather