The General Aviation Awards program has announced its three honorees for 2020 including a well-known flight instructor and AOPA Pilot contributor, an aviation maintenance expert who has helped refurbish five AOPA sweepstakes aircraft, and a longtime accident prevention counselor and safety advocate from Georgia. 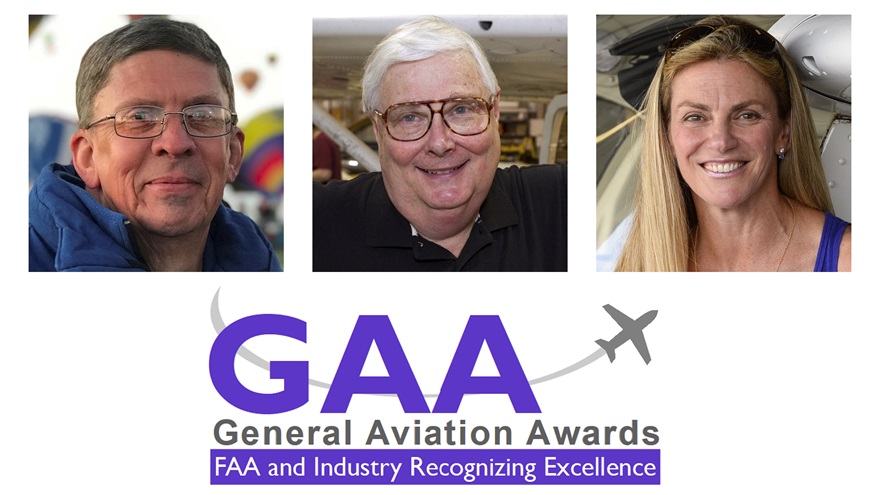 The winners will receive their awards—given annually for more than 50 years in a partnership program between the FAA and sponsoring organizations from the aviation industry—at EAA AirVenture in Oshkosh, Wisconsin, in July.

Catherine Cavagnaro of Sewanee, Tennessee, was named the 2020 National Certificated Flight Instructor of the Year. Cavagnaro owns and operates Ace Aerobatic School in Sewanee and is widely regarded as an expert in spin recovery and avoidance and upset-recovery techniques. Cavagnaro is a regular contributor to AOPA Pilot magazine and a speaker at AOPA’s regional fly-ins. She is a professor of mathematics and former chair of the mathematics department at Sewanee: The University of the South, where she developed and implemented courses in aerodynamics, differential equations, and mathematical modeling. She serves as a lead representative for the FAA Safety Team of the Nashville Flight Standards District Office and was honored as the 2018 FAA Safety Team Representative of the Year, according to the award announcement. She is a designated pilot examiner.

Dennis Wolter of Cincinnati was named 2020 Aviation Technician of the Year. AOPA members know Wolter as the founder of Air Mod, the company that redesigned and reupholstered the interiors of five AOPA sweepstakes airplanes between 1994 and 2013. Wolter founded Air Mod in 1973 after graduating from the University of Cincinnati in 1969 and teaching engineering and aviation maintenance there from 1970 to 1973. He holds a supplemental type certificate and has produced numerous FAA field approvals for “seat improvements, cabin ventilation, instrument lighting, cabin upholstery, windshield and window modifications, and passenger restraints.” He has presented “numerous seminars about interior renovation, corrosion, aging aircraft issues and compliance with FAA regulations” at AOPA events, EAA AirVenture, Sun 'n Fun Aerospace Expo, and aircraft type club events. He has written nearly 100 articles for owners’ group magazines and “currently writes monthly articles for Cessna Flyer and Piper Flyer magazines.”

Gary Brossett of Midland, Georgia, will receive the 2020 National FAA Safety Team Representative of the Year award. He was appointed a Georgia accident prevention counselor in 2005, and went on to become an FAA Safety Team representative, devoting himself to “managing and mitigating GA accidents, incidents, pilot deviations and runway incursions.” During the past five years he has hosted more than 84 aviation training events in his area—76 percent of total events—and more than 208 in the Georgia district, or 44 percent of the total. Brossett served in the U.S. Air Force from 1980 to 2005 as a mechanic, engine shop supervisor, lead engine mechanic, engine maintenance supervisor, aircraft maintenance supervisor, and technical school administrator and instructor, according to the announcement. After leaving the U.S. Air Force, he joined Pratt & Whitney and serves as a senior quality engineer and maintenance instructor at the company’s Engine Center in Columbus, Georgia. He is an airframe and powerplant mechanic with inspection authorization and a private pilot with airplane single-engine land and lighter-than-air/balloon certificates, and a certificated remote pilot.