Get the app Get the app
AOPA Members DO more LEARN more SAVE more - Get MORE out of being a pilot - CLICK HERE
News & Media FAA, training industry take precautions amid coronavirus concerns

Airlines were among the first to face the disruption caused by the coronavirus pandemic, but the effects soon extended to the universities and other programs that train pilots. 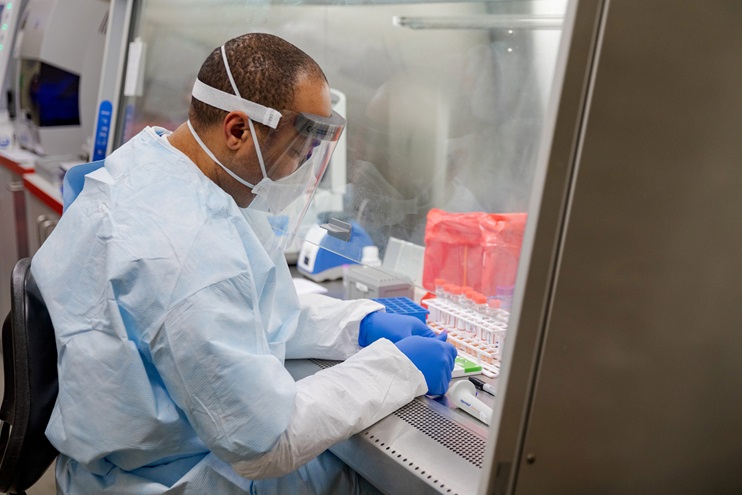 Pennsylvania Commonwealth microbiologist Kerry Pollard performs a manual extraction of the coronavirus inside the extraction lab at the Pennsylvania Department of Health Bureau of Laboratories on Friday, March 6, 2020. Photo courtesy The Office of Governor Tom Wolf of Pennsylvania.

As a growing list of colleges and universities canceled classes or moved them online, aviation training continued. Embry-Riddle Aeronautical University stepped up efforts to disinfect cockpits and offered graduating students a chance to “walk across any Embry-Riddle graduation stage in the world, at any time” rather than travel to one of the school’s campuses.

Embry-Riddle Assistant Vice President of News/Research Communications Ginger Pinholster said university officials are “proactively planning for a variety of contingencies” to ensure that all operations—including coursework—continue without interruption. “Normal operations for classes, flight operations, athletics, and other activities on both of Embry-Riddle’s residential campuses remain in place, but we have ramped up safety precautions.” During flight training operations, precautions included “regular disinfection of aircraft controls and handles, and efforts to educate staff and students regarding mitigation strategies.”

University of North Dakota Assistant Dean of Aviation Ken Polovitz said it was too early to determine if the pandemic, which first appeared in China and spread around the world, would have an effect on enrollment. He said the 2020 fall class of new students “is committed” to attending the school, but at the same time, he expressed concern that any prolonged downturn in demand for air travel could turn the tables on what has become, in the face of a pilot shortage, a buyer’s market for qualified pilots.

The airline industry is expected to sustain major losses as countries attempt to lock down travel, and fewer people want to take trips. The New York Times reported March 5 that empty aircraft, canceled flights, and steep declines in airline stock prices coincided with an industry group’s prediction that the pandemic would wipe out up to $113 billion in revenue across all carriers. More than one news article compared the aviation industry’s plight to 9/11 or the Great Recession. Colleges have called back their study abroad students, and President Donald Trump on March 11 instituted a ban on travelers coming from Europe to the United States.

Despite the setback to air travel because of increasing travel fears, a United Airlines spokeswoman said the carrier was “fully committed” to the United Aviate pilot pathway program and to helping fill the void for an expected class of 10,000 future pilots within the next two decades.

She added that media reports about delays for a United pilot class set to begin in early March were centered around a class geared toward “traditional” pilots—those hired directly to United from other major airlines, regional air carriers, cargo operators, and the military—but “not Aviate.”

The FAA and NASA were also feeling the effects of the coronavirus. GA pilots and flight school students interested in visiting air traffic control facilities will have to look elsewhere after the FAA curtailed tours of those facilities out of an abundance of caution, and NASA’s Advanced Air Mobility Workshop was canceled.