Get the app Get the app
News & Media Aerodynamics: Nothing but a number

A closer look at stall speed

CFIs repeat it like a mantra: An airplane can stall at any airspeed, in any pitch attitude.

Your trainer’s wing always stalls when it exceeds its critical angle of attack—and that can happen even if the airplane is pointed straight down and approaching VNE. So what do the stall speeds published in the pilot’s operating handbook mean? These only apply for the stated conditions: often level flight, maximum gross weight, and most forward center of gravity, with flaps retracted (VS1) or in the landing configuration (VS0). Factors such as total weight, load factor, power, and center of gravity location affect stall speed—sometimes significantly.

Stall speed increases as weight increases, since wings need to fly at a higher angle of attack to generate enough lift for a given airspeed. The increase in load factor in a turn also increases stall speed; in a level, 60-degree-bank turn, for instance, the effective weight on the wings doubles and stall speed increases by about 40 percent. And wing contamination such as frost or ice can reduce the amount of lift produced by the wing, also raising the stall speed. Changes to the airfoil geometry from high-lift devices such as flaps or leading-edge slats increase the maximum coefficient of lift and thus lower stall speeds. Here, we look at two lesser-known factors affecting stall speeds: center of gravity location and thrust produced. —Ed.

It is possible to have the center of gravity slightly behind the center of pressure, in which case the tail must produce upforce and the stalling speed decreases even more. Such a feature exists in canard-design airplanes.

To understand that, we must first reconsider the often-misleading picture of the four forces in flight—all acting through the airplane’s CG. A more realistic illustration of aerodynamic and gravity forces acting on an airplane in straight and level flight is shown below. The lift force acts through the center of pressure, which frequently is slightly behind the airplane’s CG. The center of pressure moves forward as the angle of attack increases and rearward as the angle of attack decreases. The horizontal tail’s incidence angle is usually negative (longitudinal dihedral), and the tail most often produces tail-down force to offset the pitch-down moment from the main wing lift in straight and level flight. Additionally, the thrust and drag almost never act through the airplane’s CG and they create their own torque-couples (pitch down or pitch up), which depend on many factors (see “Power Up,” facing page). 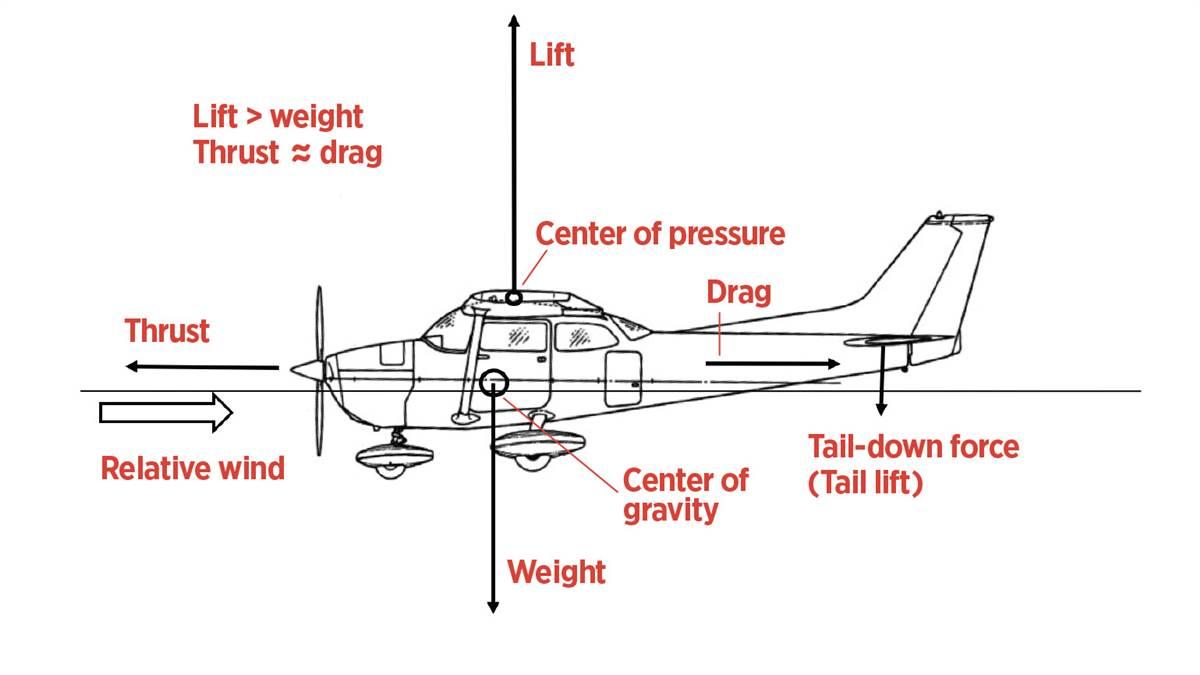 The effect of forward CG is to increase tail-down force, main-wing loading, and the stalling speed.

The tail-down force opposes wing lift and increases effective weight. As the CG moves forward, the wing must now produce more lift, and hence the stalling airspeed increases (as the square root of the effective wing loading). On the other hand, as the CG moves rearward, less tail downforce is required and the stalling speed decreases. A dynamic wing-loading reduction of 10 percent will cause an approximate 5 percent reduction of the stalling speed. This can go as far as totally unloading a wing in which case the stalling speed becomes zero (nothing to lift). Conventional airplanes are designed so that CG and center of pressure are quite close on the longitudinal axis in the normal operating range. Many conventional airplanes often pitch down in a stall because the horizontal tail stalls before the main wing. 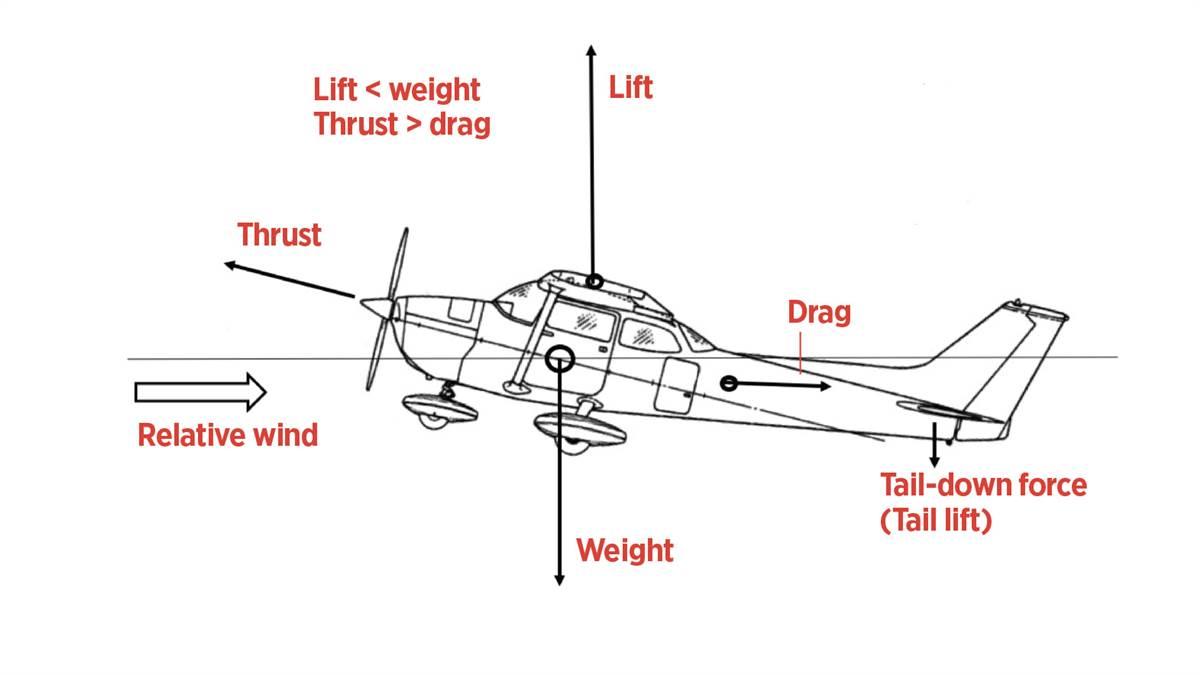 Balance of forces in slow flight and the effect that thrust has on the stalling speed. The point through which the resultant drag forces act will depend on the actual angle of attack, airspeed, configuration, control deflections, interference between boundary layers, and other factors.

How does thrust/power affect stalling speed? Forces and associated pitching moments in straight-and-level slow flight are shown below. Although the pitch angle and the angle of attack are relatively large, the flight path is horizontal.

If we project all forces on vertical and horizontal axes, we notice that the horizontal thrust component must offset total drag (including tail trim drag) in unaccelerated straight and level flight. Hence, the total thrust intensity must be larger than drag. On the other hand, the vertical thrust component opposes weight and less lift is needed, decreasing the stalling airspeeds. The vertical thrust component is normally larger than the tail’s downforce at high pitch angles. Thrust effects can go as far as totally removing the need for lifting surfaces. Many short-takeoff-and-landing propeller-driven airplanes have powerful engines and with efficient wing boundary layer control the stalling speeds are significantly decreased at high pitch angles, allowing for short takeoff and landing distances.

As the CG moves forward, the wing must now produce more lift, and hence the stalling airspeed increases.However, the propeller thrust in single-engine airplanes adds another complexity. Added thrust (induced flow or propwash) is often a destabilizing factor. The propeller’s induced flow increases with thrust, which also energizes the boundary layers on the wing root and the horizontal tail. That is not bad in itself, but often causes sudden and rapid nose drop as the normally thin-airfoil horizontal tail surfaces experience sharp leading-edge stall at high AOAs. Hence, the power-on stall entries are normally crisper (depending also on CG location) than power-off stalls.

In many conventional-tail airplane designs with tractor propellers, the go-around power in trim-up landing approach will cause a sudden pitch-up because of enhanced propeller induced flow. If not promptly arrested, it may cause the airplane to stall and enter an incipient spin (if any sideslip exists). While added thrust normally reduces stalling speeds, it may simultaneously cause serious control problems in conventional single-engine airplanes. FT

Nihad Daidzic is president of AAR Aerospace Consulting. He is also a professor of aviation at Minnesota State University, Mankato. He is an ATP AMEL and an active gold seal flight instructor with experience in airplanes, helicopters, and gliders.