Get the app Get the app
AOPA Members DO more LEARN more SAVE more - Get MORE out of being a pilot - CLICK HERE
News & Media On Instruments: Basic attitude flying

The prime skill for IFR flying

What’s the most important instrument flying skill? That’s easy—it’s the skill emphasized from the very beginning of your training for the instrument rating: basic attitude instrument flying, or BAI as it’s sometimes abbreviated. It’s maintaining airplane control by hand-flying without any visual references to the world outside the cockpit. All the other flying skills such as navigation, communication, or systems management blanch in importance. 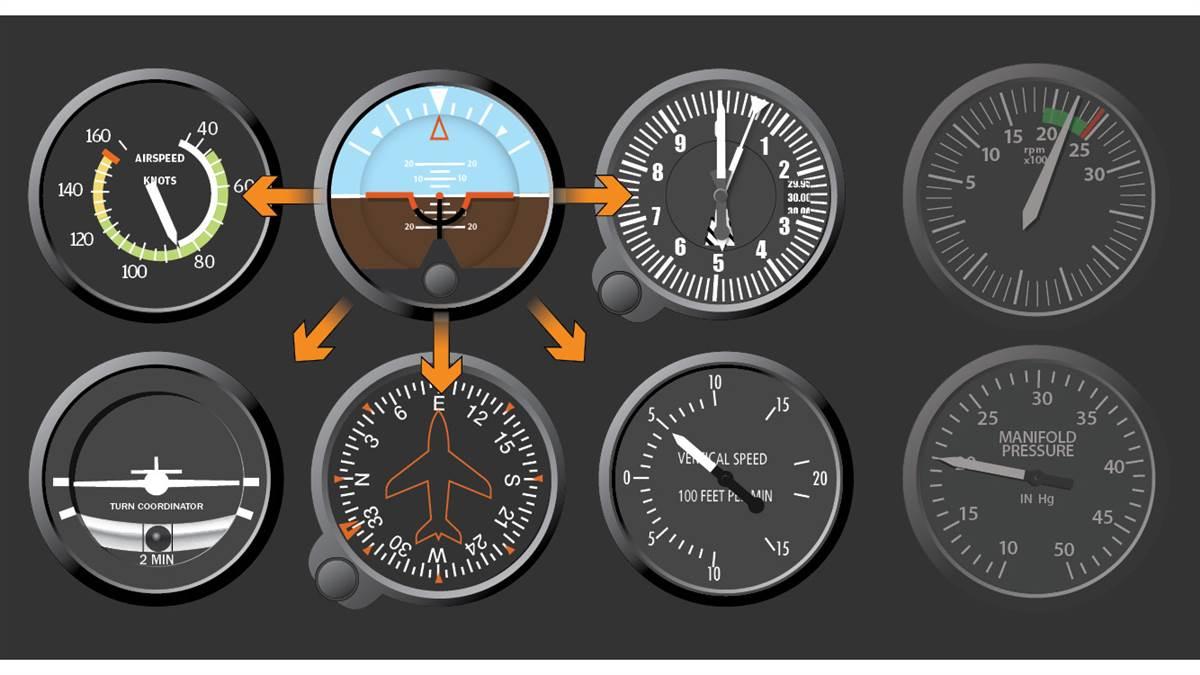 With the traditional round gauge,or “six-pack” setup, information is spread out among the six fundamental flight instruments and the power gauges. The attitude indicator is front and center, and serves as a home base for the scan. To prevent fixation on any one instrument pilots should shuttle their focus between the attitude indicator and the other gauges.

Depending on the phase of flight, certain instruments are considered primary in importance. For pitch, the altimeter gives the best source of information in straight and level flight; for bank, the heading indicator gets the prize. The other instruments give secondary information that can be used for comparison, confirming that the airplane is doing what you want it to do.

The term “control and performance” is another way of describing flight on instruments. This simply means that you fly so as to create the conditions you’ll need for a certain phase of flight. Ideally you’ve determined those combinations of conditions during your training. For example, for a straight-ahead climb, you’ll need to pitch the nose up a few degrees (as shown on the attitude indicator), while keeping the wings level (using the attitude indicator, turn coordinator, and heading indicator), adding climb power (using the tachometer, manifold pressure gauge, and any fuel flow indications for information), and confirming the climb (using the altimeter and vertical speed indicator). 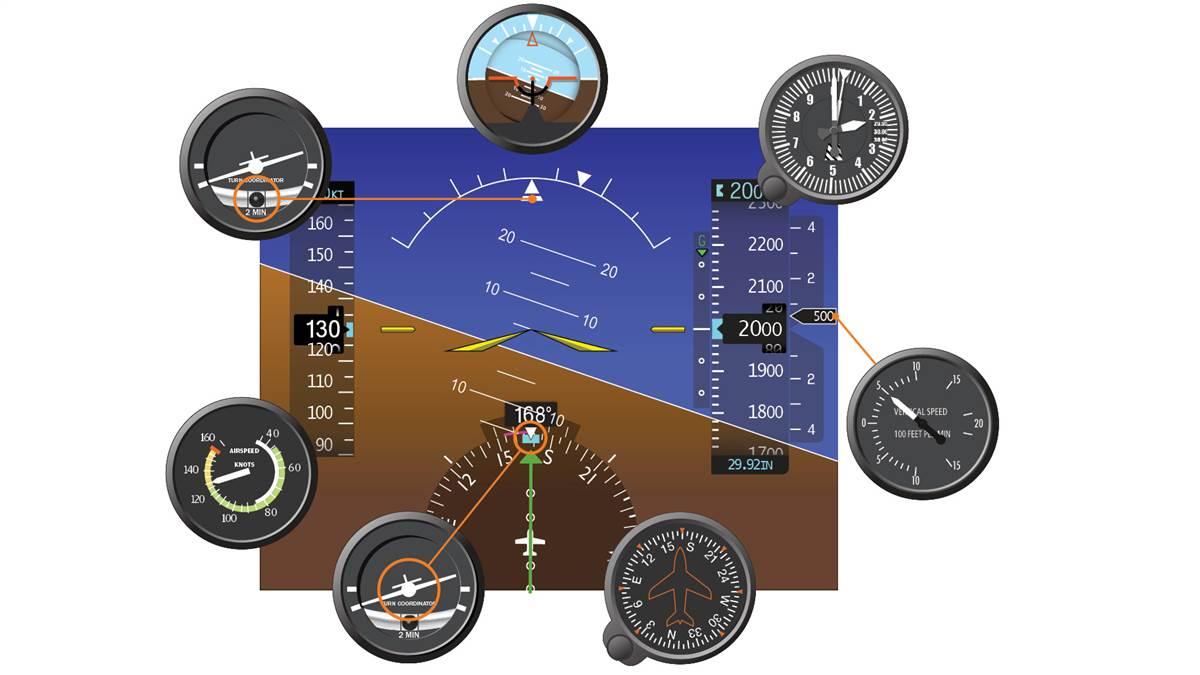 Glass primary flight displaysput all the flight information on one screen. There’s debate over whether vertical tape presentations are as effective as round-gauge pointers and dials, but there’s no quarrelling over the wide horizon line’s ability to quickly show the airplane’s pitch and bank condition. The skid-slip indicator, or “rudder ball” is replaced by a small bar that slides beneath the sky pointer. The power gauges are usually presented on a separate, multifunction display—and are typically round gauges.

Of all the flight instruments on the panel, the prize for greatest importance goes to the attitude indicator. The heading indicator comes in a close second. In many airplanes, these indicators depend on the force created by a vacuum pump to keep their gyros spinning and providing accurate attitude and heading information. Lose the vacuum pump, and you’re in for a workout. That’s because you’ll be relying on the rest of the gauges to infer your attitude, heading, and bank. Now you’re flying with a partial panel, and you’ll have to speed up your scan.

The only way to avoid an unusual attitude is to scan for agreement between the gauges. Whatever you do, don’t fixate.Under normal circumstances, you’d be spending a lot of time looking at the attitude indicator. With it out of the picture, it’s natural that your attention will still be drawn to it out of sheer habit. To keep the airplane under control you’ll have to break that habit and study the other gauges. It helps if you put an instrument cover over the failed attitude and heading indicators. This helps preserve your focus on the working gauges.

Here’s where a rapid, efficient scan comes into play. Yes, you’re always scanning, but with a partial panel you dare not miss the slightest onset of an unwanted bank, descent, or other disturbance. There’s a temptation to fixate on a single instrument, which can be disastrous—with either a full or partial panel. It’s common to fixate on the heading indicator during a turn to a heading, for example. So, while staring at the heading indicator you fail to notice that you’ve lost altitude, say, or are over- or underbanking.

Big-screen glass panels, like Garmin’s G1000, have become popular in the past decade, bringing inevitable comparisons with traditional “round gauge” or “six pack” panels. It can be a big deal if you’re working on your instrument rating. Which panel is best for learning to fly on instruments? For many, economics solve the argument. Newer airplanes cost too much to rent or buy; older airplanes rule the general aviation fleet, and most of them have six-packs.

Traditionalists argue that old-school round gauges are best when it comes to learning the fundamentals of instrument flying. There are more individual instruments to scan, and the instrument indications give graphic cues that can be quickly interpreted. Take the altimeter, for example. Its hands, resembling those of a clock, give a fast indication of altitude. Hour hand on the six, minute hand straight up? You’re at 6,000 feet. Because you must constantly take in six instruments’ worth of information, and those instruments are spread out, some argue that round gauges are better tools for learning to scan effectively—and that early training on round gauges makes the best instrument pilots.

Of all the flight instruments on the panel, the prize for greatest importance goes to the attitude indicator.Those favoring glass cockpits point out that the information of six gauges is presented directly in the pilot’s view, making the scan easier. The horizon line dominates the primary flight display (PFD) and any synthetic terrain presentation also gives excellent situational awareness when on instruments. A PFD’s vertical airspeed and altitude scales are just as intuitive as the presentations on round gauges, and there’s less potentially vertigo-inducing head movement when checking various gauges and other information. Because glass panels are electrically powered and fed by very accurate attitude and heading reference system (AHRS) units, attitude updates are instantaneous. Navigation information presented on the moving map of adjacent multifunction displays (MFDs) gives unprecedented, direct presentations of an airplane’s position, track, and course guidance.

Round-gauge advocates point out that the ability to form a mental map based on inferences from round course deviation indicators (CDIs) is every bit as important—maybe more so—to situational awareness.

All of this may soon be moot, as glass displays become more affordable as aftermarket installations. And flight schools preparing future airline pilots overwhelmingly favor glass cockpits. “It’s what they’ll see when they get into an airline fleet,” said Kenneth P. Byrnes, Embry-Riddle Aeronautical University’s flight department chairman. “We still teach using six-pack panels, but only in ground school. Besides, the students still need to learn how to scan with glass panel displays.” When asked what training the airlines favor, Byrnes said “Glass. But that’s not what the airlines value the most. They want to see a pilot with a commitment to the right attitude, who’s a good decision-maker and risk manager.”

That’s great insight. But AHRS can fail, leaving general aviation pilots to face large red X’s on those big screens. It’s rare, but it can happen. If you’re in an airliner’s cockpit, there will be another AHRS, and another generator, and another battery for backup. But in a typical general aviation airplane, standby instruments may not be installed. If they are, they’re small and often tucked away. So if you’re flying a piston single with glass and an AHRS or electrical issue crops up, you’ll have to rely on a cluster of three mandated backup instruments—and yes, they’re probably round gauges.