Get the app Get the app
Already a member? Please login below for an enhanced experience. Not a member? Join today
News & Media The reimagined Phenom 300E

Editor's note: “The printed version of this story incorrectly stated the number of deliveries of Phenom 100s and the fuel capacity increase of this version of the Phenom 300E. AOPA regrets the error.”
It’s been 15 short years since Embraer first announced its intention to bring its Phenom business jets to market. In that time, both the Phenom 100 and its bigger brother, the Phenom 300, have undergone a series of improvements that helped guarantee an enduring popularity. 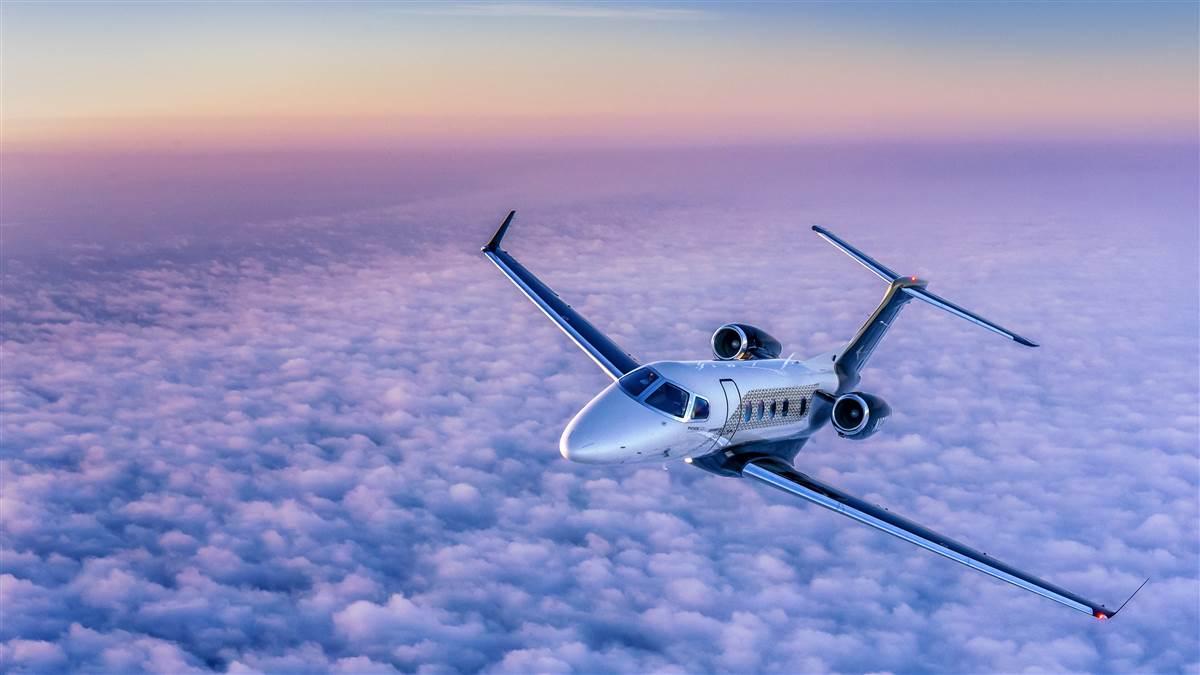 But of the two, the Phenom 300 has attracted more sales. Its greater cruise speed, seating for up to 10 passengers, and 2,000-nautical-mile range brought 541 deliveries as of this writing. Still, with 380 deliveries, the Phenom 100 hasn’t been a slouch. Embraer’s “big jet” design elements, together with the Phenoms’ Garmin avionics, appeal to general aviation pilots wanting to step up from airplanes with decades-old type certificates.

The Phenom 300’s latest round of upgrades is substantial. Sure, the switch to Garmin’s G3000 avionics in 2013, and the 2017 introduction of the Phenom 300E and its new interior, made news at the time. But the latest 300E variants feature an even wider range of new cockpit, cabin, and performance features. Embraer says they’re the result of customer feedback.

By far, the most noteworthy addition here is Embraer’s ROAAS—runway overrun awareness and alerting system. This $28,000 option, which involves hardware and software changes to several avionics units, performs real-time analysis as the airplane approaches a runway for landing. It uses information from the air data computers, GPS, weight and balance calculations, and notam information (e.g. displaced thresholds). The flight plan provides the selected landing runway at the destination airport, and the ROAAS engages at 1,000 feet agl. As the approach proceeds, the system automatically evaluates the airplane’s position, speed, descent rate, and configuration. It continuously calculates the projected flight path and touchdown point against runway remaining and the runway distance required for a safe landing. If there’s a risk of an overrun it provides visual and aural alerts. ROAAS covers approaches flown in icing conditions and to wet or dry runways. It doesn’t cover takeoff overruns, ice- or snow-contaminated runways, excursions off the side of a runway, or landings with an engine out or a system failure (such as inoperative spoilers or brakes).

Between 500 and 100 feet agl, if it calculates an overrun, a visual annunciation appears on the primary flight displays (PFDs) and an aural “caution, overrun” is provided twice. At 100 to 30 feet agl an “overrun, go around” command sounds off. If the pilot lands anyway, an “overrun, brakes” warning comes over the audio.

In cases where the airplane is in a prolonged flare with adequate runway remaining, there’s a “long flare” alert. This is most likely to happen on long runways, but if the flare consumes too much runway, the “overrun, go around” command comes alive.

By the way, this is the first application of a ROAAS in an executive aircraft. Airbus and Boeing have overrun protection systems in some of their airliners, and Gulfstream says its new G700 will have one. But Embraer says no other manufacturers are working on a ROAAS.

Another feature—Stabilized Approach—is part of the new Garmin G3000 avionics suite with the new Phenom 300E. This issues visual and aural “unstable approach” alerts when airspeed on approach varies by four to five knots from VREF, descent rates exceed 1,000 fpm, flaps aren’t deployed, or glidepath deviations are one dot or more.

It bears mentioning that overruns have been the cause of many light jet accidents, and the Phenoms certainly have had their share. They’re slippery airplanes with high-performance wings, and being even a few knots fast can cause long landings and overruns. For this reason, Embraer says a normal Phenom landings should be preceded by flying down final at VREF, with no extra airspeed margin unless gusty conditions prevail. Phenom 300s have multifunction spoilers (flight spoilers plus ground spoilers that extend after landing) to help pilots manage airspeed, and Phenom 100s added multifunction spoilers in 2014 when Embraer brought out the Phenom 100E.

Landing by the numbers

The G3000 incorporates a new initialization procedure that provides step-by-step prompts on the airplane’s dual Garmin GTC 575 touchscreen control units, and the touchscreens are also used to call up graphic weight and balance presentations, V-speeds for takeoff and landing, and time and fuel calculations for all phases of flight—in short, all the functions you’d expect of a proper flight management system.

Other “new” features are overdue, but helpful nonetheless. These include electronic checklists, ADS-B In, VNAV guidance for visual approaches, visual approach procedure sequencing, electronic IFR and VFR en route charts, Garmin FliteCharts (Jeppesen ChartView is an option), coupled go-around, and emergency descent mode (EDM). In the event of a cabin depressurization above FL250, EDM will automatically perform a rapid, 250-knot descent to 15,000 feet while turning 90 degrees off heading and setting the transponder to 7700. All the pilot has to do is set power to flight idle and extend the spoilers.

Another nice-to-have item is the ability to preprogram the G3000’s FMS with airspeeds for each phase of flight. This lets you use a rotary switch on the glareshield panel to shuttle between FMS speeds and manually selected speeds when flying on autopilot.

There’s also a nod to the future with the addition of FAA Data Comm capabilities. Although not mandated now, this feature currently lets crews receive pre-departure clearances in text form at 62 airports. In the future it will allow texting with ATC using a controller-pilot datalink communications (CPDLC) application similar to that already used by the airlines.

Not all these enhancements are software updates via data card. In all, there are 13 hardware upgrades in the new Phenom 300E, including the touchscreen controllers, TCAS II, attitude and heading reference system units, maintenance panels, and much more.

Embraer officials wanted to be able to promote this latest Phenom 300E as having a Mach 0.8 top speed. They got there, and without installing more powerful engines. The same 3,360-pounds-thrust Pratt & Whitney PW535Es that have always been on Phenom 300s were tweaked by dialing up the engine software to boost the fan speed enough to produce an additional 118 pounds of thrust per side. This ate into the preexisting fan speed operating margin, but not enough to impact any limitations or to raise operating costs. The result is the PW535E1 turbofan, with a maximum thrust rating of 3,478 pounds. The engineers also found 50 more pounds of fuel hiding somewhere in the original fuel tanks, and this let the company push the airplane’s maximum range to the 2,010-nm mark.

Previous Phenom 300 models listed Mach 0.78/464 KTAS and 1,992 nm as their maximum operating speeds and IFR ranges, so this extra 0.02 Mach and 18 nm seems to be all about bragging rights when you consider that optimal performance hangs on such a narrow collection of altitude, temperature, and pressure variables. You might get to Mach 0.80 one day, but maybe not the next.

I flew the new Phenom 300E alongside Embraer Production Test Pilot Steve Baerst. After running through the initialization, we entered the flight plan, got our V-speeds and load information, and taxied out from Embraer Executive Jets’ massive complex at Melbourne, Florida’s International Airport. Among the other nice things about data entry was the ability to automatically download METAR data from the airplane’s SiriusXM datalink weather receiver. No more tedious pecking away to manually enter the winds, temperatures, elevation, and so on.

At 16,400 pounds, we were light that day, so I was expecting some pretty impressive performance based on previous Phenom 300 flights. For takeoff I stood on the brakes, pushed the levers up to the Takeoff setting, and then turned it loose. Maybe it was that extra 236 pounds of thrust, but the acceleration pushes you back in the seat and in a few seconds our V1 and VR of 103 knots came and went. After takeoff the call is for gear up and a 15- to 20-degree nose-up attitude for the initial climb. This gives you a climb rate around 3,500 fpm, but to tell you the truth I was too busy just hanging onto the ram’s-horn yoke and getting ready to make our initial level-off to notice the vertical velocity indicator.

The ailerons are a tad heavy, but what would you expect from an airplane of this size and mass? The en route climb to the Embraer practice area was at 160 KIAS, then Mach 0.6. At FL330—where most jets perform the fastest, if not the most economically—power was set at maximum cruise and we watched the airspeed settle. Sure enough, 469 KTAS and Mach 0.787 posted on the PFDs. This was with N1 set at 92.1 percent, a static air temperature of minus 43 degrees Celsius, and a total air temperature of minus 15 degrees Celsius—which equated to ISA-plus-7 degree conditions.

The next item on the checklist was a demonstration of the stabilized approach and coupled go-around features. On a coupled final for Melbourne’s Runway 27L the airplane was fully configured at our VREF of 111 KIAS. By pulling the power back slightly the airspeed dropped to 106 knots—just above the amber and red low airspeed bands on the airspeed indicator tapes. “Unstable approach” came the aural warning, along with an amber “speed” message on the PFD.

After flying to the threshold, I powered up and flew a low pass for a while, then hit the go-around button on the side of the power lever. Up came the command bars, and I powered up and pitched up for a go-around on autopilot. It’s hard to believe that Garmin once made you suspend navigation and disconnect the autopilot before climbing away on a go-around. That’s too much work, and too much distraction, at a time when you’re low and slow and have little margin for error—especially in actual IMC. Coupled go-around does away with all that, and I say good riddance.

The ROAAS also worked as advertised. With power set to produce an approach airspeed of 130 knots, the “overrun, overrun” warning came as the departure end of the runway came fast into view. Another go-around, another trip down final—without warnings, this time—and I made a decent landing in a 10-knot crosswind. A word of advice to prospective pilots: Since Phenoms have no reverse thrust, their antiskid brakes are very powerful. Until you get some practice, go easy or you can send the ship lurching around.

Leaving the cockpit, I realized I’d done it once again: forgotten to spend more time in the cabin. That’s too bad, because the airplane has the stylish and functional Bossa Nova interior—a $150,000 option that debuted in Embraer’s Praetor 600 super-midsize jet. There’s plenty to say about the thought and care that went into this interior treatment, so much so that it deserves a story of its own. Look for it in an upcoming issue.

The 300E faces some pretty impressive competition in the Cessna Citation CJ4 and Pilatus’s new PC–24. Both those airplanes have prices, performance, and payload numbers very similar to those of the Phenom 300E (the new Phenom 300E has a base price of $9.65 million). But the 300E punches above its weight in this neighborhood. Embraer says it’s been the most-delivered business jet for the past eight years. Fractional operators Flight Options (now part of Directional Aviation’s fractional fleet) and NetJets ordered a total of 150 Phenom 300s, with options for 125 more. The fulfillment of those options continues today. Deliveries of the new Phenom 300E are set to begin in May 2020.

If Embraer has found a formula for success, it’s to offer an innovative design and then provide timely upgrades. Make sure the airplane stands tall on the ramp, flies well, has an airstair door, good cockpit ergonomics, single-point refueling, a refined cabin with style and attitude befitting a much larger airplane, an airline-style lav, and a substantial service network. And yes, a Mach 0.8 cruise speed and 2,000-nm range doesn’t hurt either.