Get the app Get the app
We will be performing maintenance on our systems Sunday, 8/21, beginning at 12:00 A.M. ET and ending at 6:00 A.M. ET. During this time, you may experience intermittent service outages. We appreciate your patience.
News & Media 'NASA Blueberry'

Many aspire to become pilots, but few follow through. How many dream of going even further? Perhaps…Mars? At 9 years old, Alyssa Carson knew she wanted to go to space. And now, 10 years later, she’s well on her way. 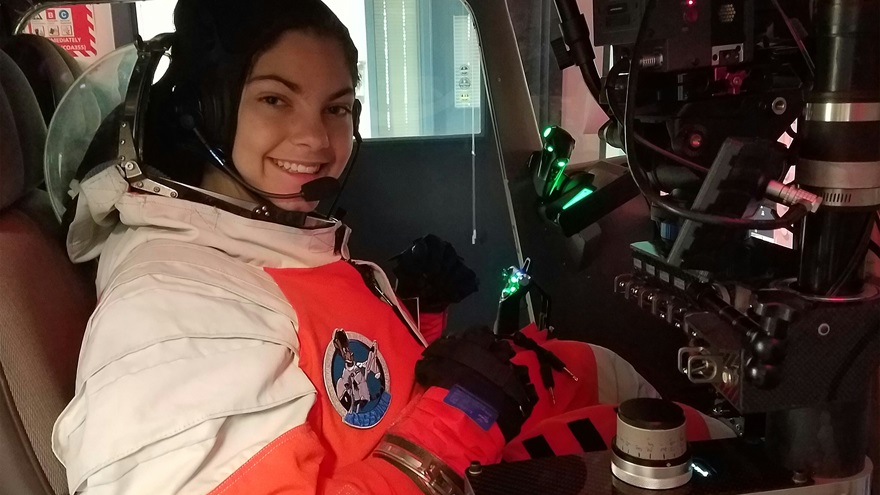 Carson is a general aviation pilot who hopes to continue her training and eventually get her instrument rating, along with many other accomplishments she has her sights set on. Currently a freshman at the Florida Institute of Technology, studying astrobiology, Carson is doing everything she can to make sure the stars align. And with so much ambition at such a young age, it will be an exciting adventure to watch as she continues her journey to hopefully join the ranks of some of her idols.

According to her NASA Blueberry website, “At just 19 years old, Alyssa’s list of accomplishments include witnessing 3 Space Shuttle launches, attending Space Camp 7 times, Space Academy 3 times, Robotics Academy once, youngest to graduate Advanced Space Academy, and multiple Sally Ride Camps.” (Carson got the nickname “Blueberry” at space camp because her flight suit was a deeper blue than other flight suits; the name stuck and her father launched a NASA Blueberry Facebook page to keep her family updated on her adventures.)

Carson never stopped reaching for the stars and “in 2012 and 2013, she furthered her education at Space Camp Turkey and Space Camp Canada, becoming the first person to attend all three NASA Space Camps in the world. Alyssa is also the first to complete the NASA Passport program, visiting all 14 NASA Visitor’s Centers stretching across 9 states.” And if that wasn’t enough, “in January 2013, NASA invited her to be on the MER 10 panel in Washington DC to discuss future missions to Mars live on NASA TV. She was later selected as one of seven ambassadors representing Mars One, a mission to establish a human colony on Mars in 2030. In October of 2016 Alyssa was the youngest to be accepted and graduate the Advanced Possum Academy, officially making her certified to go to space and an astronaut trainee.”

AOPA checked in with Carson to find out what inspires her and how she is working toward achieving her dreams, and hopes others are inspired to do the same.

What made you decide at such a young age you wanted to become an astronaut?

I was watching a cartoon where the characters went to Mars and it was then that I decided I wanted to one day go to a planet to which no one had been.

What did you enjoy most about all the space camps and academies you attended?

I learned about space education, got to go in simulators, and made a lot of new friends. It was the best time. The space camp family became my second family. They helped me so much. Space camp was the first steppingstone toward real training. Being able to meet and interact with astronauts and people who work in the industry.

You earned your private pilot certificate at age 18. What do you enjoy most about flying general aviation?

My favorite part was being in total control of complicated machinery. It is great to just get away by yourself, fly around and see the scenery below. Gives me a calm feeling having time to myself with no distractions.

How often do you get to fly GA while you’re also studying to become an astronaut?

Every now and then because it is hard to get on the roster to fly with all the aviation students at Florida Institute of Technology. It has also been very hard to stay current because of the virus. I have been able to fly in some simulators, but nothing beats the real thing.

Do you hope to do more in aviation while you’re studying to become an astronaut?

I want to get my instrument rating. I’d like to start again soon as things open back up more. It’s at the top of my list. 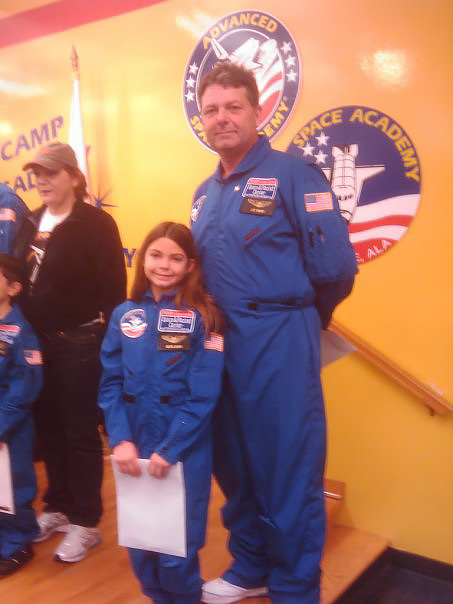 What is the process to becoming a NASA astronaut?

There is an application where usually 18,000 people will apply. They narrow it down to 20 to 30 based on résumés, and then there is the interview process. They will pick 10 to 12 and those people become ASCANS. They then train for two years to make sure they have the "right stuff." They are put in on a mission and then train for one to two years for that mission. When you cross the Karmen line you are then an astronaut.

Bert Carson, Alyssa’s father, explained that “the Karman line is the boundary between the Earth's atmosphere and outer space. It is at around 300,000 feet, so when you cross it then you have been to space and are an astronaut. The misconception is that astronaut is a designation not a job. You have to have a job (science, doctor, etc.) to be an astronaut. It is not just a NASA thing like so many people think.”

Do you have any aviation or NASA mentors or heroes? What advice have they given you?

I met astronaut Sandra Magnus when I was 9, and she made me realize that you can decide at a young age to follow your dreams. She told me that she had decided to become an astronaut at age 9, too. She went on to fly on several shuttle missions and was on the International Space Station for several months. That gave me the confidence to decide what I wanted to do at such a young age and know I can make it happen. Also, joining The Ninety-Nines has encouraged me to stay with aviation, which I love.

You’ve traveled a lot around the world. Where is your favorite place and why?

Iceland would be near the top for sure. The beautiful scenery, cool research, and wonderful people of Iceland made it great. It is such a safe place. You go from seeing glaciers to sitting in hot springs at night watching the aurora flash across the sky.

What are you currently studying in college and how do you feel that will help you achieve your dream?

I am in astrobiology. This will help with me being able to understand all the sciences that are needed on Mars. It will be a great stand out for me to be chosen for the mission. The best thing is that you get to study, conduct research, and be in labs. Then you see how they all interact with space. It gives you the training to conduct experiments on other planets.

What are your plans after college?

After FIT, I will get my master’s at International Space University in France. I have been fortunate to already be part of their program since I was 14 years old. Then I’ll get my Ph.D. in astrobiology. Then I hope to start research and apply when the application process opens.

One of the Ph.D.'s on the NASA panel when I was 12 made the arrangements for me to get a taste of ISU. I was about to work on how to move water in microgravity. Now I am about to work with Jacobs at Kennedy Space Center in some science research and global space strategies. In order to apply and stand out, you need many extra curriculars besides the normal school and research. This is why I do all the training with Project Possum and others to build my résumé.

Can you share more about your book, So You Want to Be an Astronaut?

I would receive so many messages every day from fans who wanted to know how to do what I am doing, how to be an astronaut, or just wanting to know how to get involved in STEM and NASA careers. So, I decided to write a book to show others not only how to be an astronaut, but also how to follow your dreams. Everyone has different paths they will take, and my book helps guide them.

Can you explain where the nickname 'NASA Blueberry' came from?

The second time I went to space camp, I had a knock off flight suit because I was too small for the regular one. It was a deeper blue then the normal suits. When I came down to breakfast my crew trainer said you look like a little blueberry. Everyone started calling me blueberry and it stuck on future visits. It then became my official call sign. And when my dad started a Facebook page for the family to see what I was doing, he used NASA Blueberry to stand out from the companies selling actual blueberries.

How do you feel you inspire others to pursue their dreams?

I think my age really helps kids to see me as one of them. I share my story and explain how they can follow in my footsteps. Anyone can do what I have done if they are willing to put in the hard work. I just work hard toward my dream. Others relate to me and it really puts them in a place where they know they can achieve their dreams, too.

I receive messages all the time about kids who have been inspired to do better in school and take their education seriously. One time, two different girls from opposite ends of the world were inspired to write essays and conduct experiments in their application for space camp scholarships. They both won scholarships to attend space camp. I happened to be there at the same time, and they both shared that their experience changed their life. And they are going to continue to pursue jobs in STEM.

What other goals do you hope to achieve beyond being the first person on Mars?

I want to come back and show everyone how important it is for us to start exploring other planets and preparing to live on Mars and beyond. I also want to continue inspiring kids so the next generation will follow me and take us further. 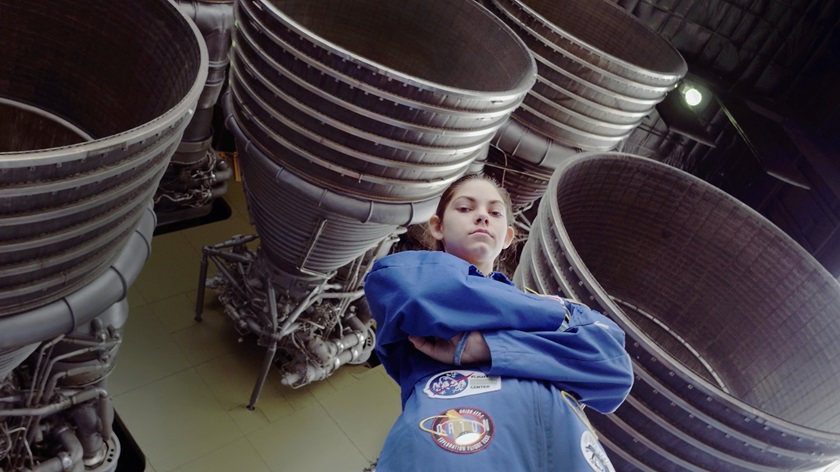 Senior Manager of Media Relations and Public Affairs
AOPA Senior Manager of Media Relations and Public Affairs, Jennifer Non joined AOPA in 2017. A former traffic reporter turned media relations specialist, and native Washingtonian, she enjoys traveling and is working toward her private pilot certificate. She was recently honored by Ragan Communications and PR Daily with a Top Women in Communications Award, in the Diversity, Equity & Inclusion Champion category and is also a member of the Board of Nominations for the National Aviation Hall of Fame.
Go to Jennifer Non's Profile
Topics: People, Career