Get the app Get the app
Get the latest news on coronavirus impacts on general aviation, including what AOPA is doing to protect GA, event cancellations, advice for pilots to protect themselves, and more. Read More
Already a member? Please login below for an enhanced experience. Not a member? Join today
News & Media Postcards: Third Thursday

Get-togethers at Mason City Airport are an 11-year tradition

There’s no agenda, no officers, no speakers, and no budget. The unofficial “Third Thursday” gathering at Mason City Municipal Airport in northern Iowa happens around dinnertime, and it draws pilots, aviation enthusiasts, families, and airplanes from all over the Midwest.

The day the music died

After taking off from Mason City Municipal Airport early February 3, 1959, a Beechcraft Bonanza piloted by Roger Peterson, carrying rock and roll idols Buddy Holly, J.P. (the Big Bopper) Richardson, and Ritchie Valens, crashed just north of Clear Lake. The singers had performed at the Winter Dance Party at the Surf Ballroom earlier that evening and had chartered the aircraft to fly them to their next show in Fargo, North Dakota.

“A few of us were standing around the hangar on a February night and decided that we really ought to get together every month or so just to get out of the house,” said Doug Rozendaal, a general aviation pilot and FAA designated pilot examiner with a hangar at Mason City (MCW). “We decided it should be simple enough that it wouldn’t seem like work. It was an excuse to get together on a somewhat regular basis, and it might even motivate me to tidy up the hangar.”

After 11 years, the Third Thursday gathering has become a staple, and regular attendees know how to make it happen.

“The first ones to get here set up the folding chairs,” Rozendaal said. “The last people to leave tear them down.”

The gathering typically draws hundreds of visitors in the summer months, especially the July event, which takes place a few days before EAA Airventure in nearby Oshkosh, Wisconsin. Scores of airplanes including antiques and warbirds park on the grass and a hard-surface ramp. Those who come bring food and drinks, and barbeque grills are abundant and expertly tended.

The event is centered at Doug and Kim Rozendaal’s hangar, but it takes place whether the couple is there or not. (John Hemann, a pilot and retired Catholic priest, is the only person with a perfect attendance record.) “This event is all about fellowship,” Rozedaal said. “That’s the reason it was started, and that’s the reason people look forward to it. We just do our best to keep it simple.” 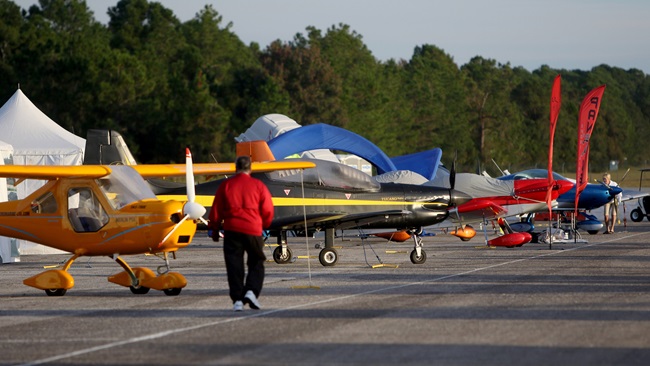