Get the app Get the app
Get the latest news on coronavirus impacts on general aviation, including what AOPA is doing to protect GA, event cancellations, advice for pilots to protect themselves, and more. Read More
Already a member? Please login below for an enhanced experience. Not a member? Join today
News & Videos Baker explains why GA is soaring in Forbes video interview

In a recent and wide-ranging conversation with Forbes Publisher and Columnist Rich Karlgaard, AOPA President Mark Baker explained why people should not be surprised at the success of general aviation in this year of uncertainty.

Baker has found no shortage of platforms to tell the GA story this year, as the industry continues to play a critical role in filling many of the nation’s transportation needs, including those to help fight the coronavirus pandemic.

In the interview with Karlgaard, himself a pilot, Baker addressed GA’s critical role, AOPA’s continued efforts to protect the freedom to fly, and the need for a more diverse industry.

Highlights of the conversation:

“General aviation is in a mini-boom right now. We’ve seen flights as measured by some of the top 77 airports up 10, 15 percent. Anecdotally, we hear of fuels sales and certain FBOs up over 60 percent… General aviation is seeing lots of use for lots of reasons. And, try finding a used aircraft for sale!”

“BasicMed is a true example of when our association leads and pulls together the community, and speaks to the representatives in the House and Senate, and said, ,we need a law changed,.’ because for 40 years, we have been requesting to get something done with the FAA, which is an alternative means to comply with the medicals. The medicals went into place in the 30s and 40s, and were really driven around… commercial and military flight. The same standards don’t apply when you’re flying yourself or your family…. We put through a law and it’s now three years … over 58,000 people are flying under BasicMed. … It’s been really exciting to see…That shows the essence and power of our community.”

The value of local airports

“Of the 5,000 airports in the country, the airlines serve less than 400 of them. … We spend a lot of time with the locals at the state level, and we have seven regional managers at AOPA, for allocating whatever the state funds could be to get matched by the FAA funds, to make sure these airports are getting their runways coated, and painted… instrument approaches upgraded—all those kinds of things that keep that infrastructure alive, which is unique in the world. There’s not another place in the world that has this kind of access.”

The need for greater diversity and inclusion in aviation

“The first and most important piecewas to create a high school curriculum for aviation in the ninth, tenth, eleventh, and now being tested this year will be the twelfth grade. … We started out very small—30 high schools originally … and then grew it over the last four years so that when we get to this fall … we’ll be in about 400 classrooms … about 8,000-10,000 kids will be enrolled. … One of the other things we do look at is the demographic … only six percent of the active pilots in this country are female. Well, about 23 percent of the people taking this class are young females. … Under-represented groups [make up] about 5 to 6 percent of the population as well. It turns out about 35 percent of these people taking this are under-represented groups. … It’s reaching inner city, suburban, and rural kids in this program.”

How is leading AOPA different than your corporate roles?

“There’s a value proposition stream: Why would people be willing to pay the membership fee? Why will somebody come and shop at your retail outlet, buy your product? Because you’ve got to feel like there’s a value there. That essence doesn’t change, by the way, if you’re a nonprofit, or if you’re a for-profit retailer, you’ve got to find a way to connect to the customer/member, that they feel like there’s a value there. Either through education, information, access to our legal services plan, whatever they feel like they’re gaining by being part of this greater community that allows us to have a voice in Washington, D.C … Everything we do, everything we move, everything we touch has to have an outcome that provides [a] value proposition.”

What do you say to someone with an interest in flying?

“Take the first step and go down to the airport and go for [an] introductory flight, and go for an introductory flight at a couple places till you feel good about that chemistry you might have at that flight school. … Making sure you’re willing to commit; Does it take time? The answer is, we know it takes time. …But I would say it’s the best thing you could ever do, is go take that first step.”

The future of electric

“What I am excited about is alternative propulsion, and in some cases, the eVTOL and the VTOL world is driving some of the energy around trying to figure out, what are the choices? In some cases pure electric is a limitation, because of weight and density for fuel that you get out of the energy of that cell, as compared to what might be a hybrid engine that seems to be kind of the most exciting thing right now, where you may take off on a gasoline, piston-driven engine, and then cruise on the electric engine, and charge the battery with the propeller when you’re on the descent.” 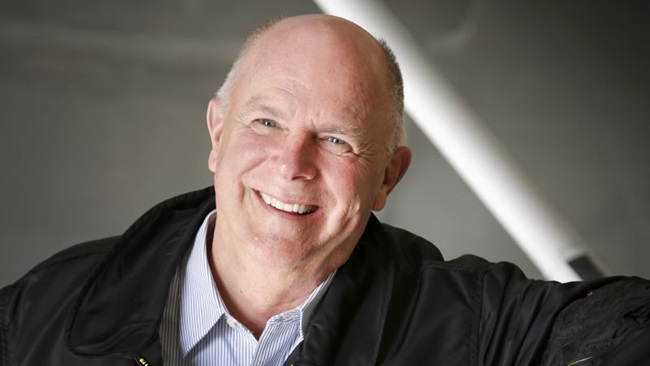